recent read: A Discourse in Steel 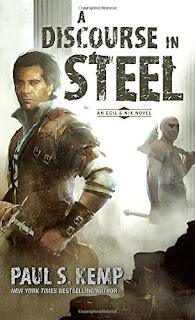 A DISCOURSE IN STEEL by Paul S. Kemp

It took me too long to return to Egil and Nix. Kemp has created a great sword-&-sorcery duo. And yes, even I who prefer novella length as tops for sword-&-sorcery, still consider this novel as sword-&-sorcery. Don't let the length fool you. While it has touches of "high fantasy" and some Dungeons & Dragons magical items and dungeon crawls, Egil & Nix comes right out of the Nifft the Lean and Fafhrd & Gray Mouser tradition.

A psychic friend of the duo learns a little too much about the city's thieves guild. The guild tries assassination and Egil & Nix know they won't let up. So the duo goes for the throat of the guild.

Along the way we get cosmic horrors of a black alley that appears at random in the city, magical "gewgaws," lost civilizations, a whole lot of action and combat, and even deeper reflections on what makes a person a person, friendship and loyalty.

The banter between Egil and Nix comes to life in the audiobook. It might work well on the page, too, but there were moments when I laughed out loud while listening.

I enjoyed A DISCOURSE IN STEEL a whole lot. I won't wait so long between books this time.

And I want a t-shirt;