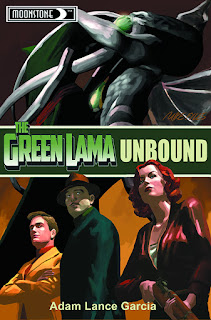 Another entry from Derrick Ferguson's 75 New Pulp Book To Get You Started list. (which, you should keep handy.)

I've not read any original Green Lama tales, nor have I read Garcia's Green Lama tales leading into this story. (It's the third in a series.) But that did not matter. I got hooked into the story. I had no problems locking in and going for the ride.

I don't want to give away too much. The plot, in a nutshell; Nazis ally themselves with cultists of the Old Ones. They are preparing to awaken Cthulhu when the stars align and R'lyeh rises from the sea bottom. The Green Lama and his companions, of course, are the ones who must stop the cataclysm.

I don't know how much of the original tales told of the Green Lama's origin. Garcia threads an in-depth origin story via flashbacks as the plot unfolds. He does a good job of tying the Green Lama's power and fate to the fate of Cthulhu and the Old Ones.

There are even a couple of pulp Easter eggs, with certain heroes being described but not named, who have crossed the Green Lama's path. And a few Lovecraft story title nods along the way, too.

I enjoyed this novel, a lot. It is done well.

In fact, I enjoyed THE GREEN LAMA: UNBOUND so much, I will be reading Garcia's two previous volumes. And I will need to try some of the original Green Lama pulp stories, too.
Posted by Paul R. McNamee at 11:00 AM