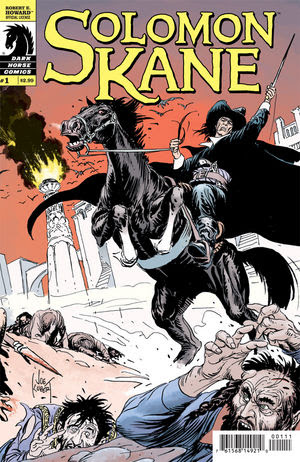 Just when I thought I was done with comics...

Well, not "done". I still buy plenty of graphic novels and collections but I had stopped buying monthly issues.

I can't rip the image from the animation, but here's the webpage.

It was good. Not as heavy on the spices as the last, but the nutmeg was still a little strong.

I'm not sure why - I guess it's because of those Sharpe novels - but I really wanted to pick up the game Stratego. Do you remember that game? I never had it as a kid but I think one of my friends did.

Well, just this month, the basic version of Stratego has gone from Napoleonic armies to fantasy motif with knights, wizards and dragons. It is an admitted attempt to appeal to a wider strata of people.

Why can't they leave the base edition as Napoleonic and make a fantasy edition as a special?

What's wrong with piquing a kid's interest about history?

(ok, it's really a pheromone thing, but still very funny)

Thoughts from the slush pile

Jason (von DarkMoor) said we were free to post in generalities about our slush reading, so I thought I would.

The single failure I see with nearly every story is the pacing, and the lack of getting to the heart of the story. In the case (genre) of heroic fantasy, I think that is very important.

Personally, I'm not one for pure action and plot. I like to get atmosphere and setting - but that can be imparted while action occurs.

Nearly all the submitted tales (that I have read - I only receive a portion of the pile) introduce the characters, have dialogs (or info dumps) about who and what their backstory is...then we get the monster...then the monster is dispatched.

I guess no one wants to show their hand early. I suppose some might be trying to build suspense. But the first thing I would do is start with the monster and someone battling it from the first word. "In medea res" - that is one thing screenwriting taught me. You can't waste film and budget getting the story going. The same can apply to prose - especially where action/adventure are the focal point.

Maybe it's a high bar, but I always go back to Robert E. Howard's tale, "The Black Stranger". That story had such a breathless violent opening - Conan hunted by and battling the Picts. While the following excerpt is not from the very first word, by the third paragraph or so (after Conan is described stalking through the woods, even though he is supposed to the hunted, not the hunter) we get this...

..the Cimmerian bounded into the path behind them and plunged his knife between the shoulders of the last man. The attack was so quick and unexpected the Pict had no chance to save himself. The blade was in his heart before he knew he was in peril. The other two whirled with the instant, steel-trap quickness of savages, but even as his knife sank home, the Cimmerian struck a tremendous blow with the war-axe in his right hand. The second Pict was in the act of turning as the axe fell. It split his skull to the teeth.

That is how you open a story in this genre, my friends!
Posted by Paul R. McNamee at 9:26 PM 4 comments:

And the first pumpkin ale is...

Dogfish Head Punkin Ale, from Delaware (not MD, as I misreported last time.)

This was one of the ones I would consider over-spiced. The nutmeg and allspice were overpowering, and the alcohol content was high. Not the smoothest or pumpkin-est.

Aside from that taste test, we had a quiet weekend with beautiful weather. Made sure to get some A.O.D. time with a book and a guitar. (Ass On Deck - our new deck that was built this summer - want to ensure I do more than just cook on the grill out there!)
Posted by Paul R. McNamee at 12:37 AM 2 comments: