Not so much on detailed reviews here. Just wanted to highlight some very enjoyable New Pulp adventures you should check out.

As I've mentioned before, if you have any interest in New Pulp, a great place to start is Derrick Ferguson's 75 Pulp Books To Get You Started.

Ferguson's own spy-mercenary-adventure hero, Dillon, appears in a growing body of work. If you like James Bond, or action movies in general, you should be reading Ferguson's Dillon tales. They are a blast!

I first encountered Dillon in BLACK PULP, in the story "Dillon and the Alchemist's Morning Coffee." 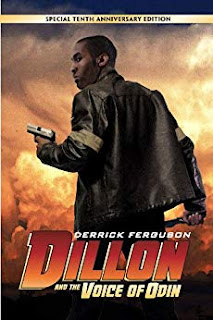 Near the end of last year, I read the first Dillon novel, DILLON AND THE VOICE OF ODIN. I was not disappointed. Check out the behind-the-scenes notes.

Recently, Ferguson released DILLON: THE ODD JOBS, where he had other writers play in his sandbox. The results are enthusiastic fun! 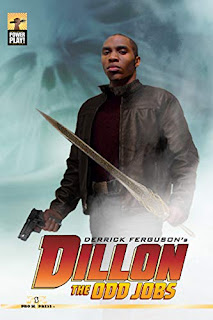 In the introduction to the anniversary release of VOICE OF ODIN, Joel Jenkins states, "Derrick has the ability to mix ... disparate elements together so they work." He is spot on. You never quite know what will be thrown in the mix--character-wise, or plot-wise, or both. The Dillon stories are break-neck speed romps of action-adventure.

I will be reading a lot more Dillon in the near future. And you should, too!
Posted by Paul R. McNamee at 11:30 AM 1 comment: 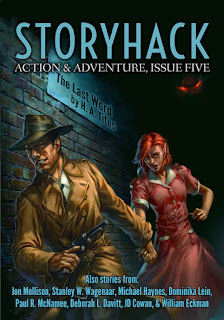 Editor Bryce Beattie always does a bang-up job with this 'zine. Please support it and buy it (including the issues in which I don't have a story.) Kudos to Bryce for all he does. If you followed along on Twitter, you know what a ordeal he had to get this issue uploaded!

"Makani and the Vulture God"--as you might infer from the title--is another sword-&-sorcery story featuring my pseudo-Polynesian-world duo, Makani and Lono. This time around, an evil force disrupts a traditional sporting event. This story was inspired by the real sport of he'e houla, the art of surfing down mountains.

As usual, interior art accompanies each tale. This fine illustration was done by Emilo Florencio. 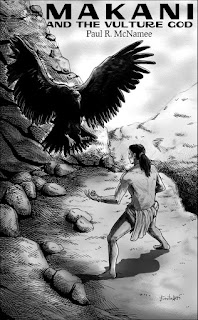