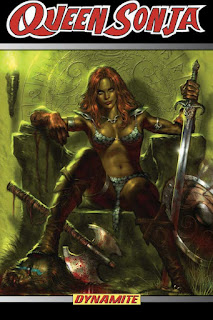 I read this one while on vacation in August.

The plot is a bit pedestrian fantasy, but not bad.  Sonja seeks a special sword and along way gets involved with bandits who are really royalty in exile from a conquered land.  The stakes keep rising, until Sonja becomes involved in a battle that leaves her with the crown of Sogoria.  To keep her crown she must battle against wizardry and political machinations.

I suppose if it's not the usurper tale (Conan, Kull) it would the be "farm girl learns she is the real queen and must kill her evil aunt" story. 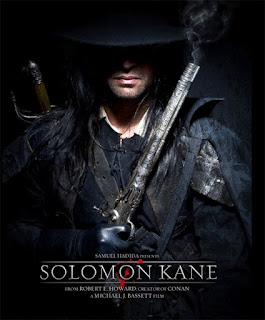 I watched Solomon Kane on-demand last night. *sigh* I really had a hard time divorcing myself from the source material. Because of that, honestly, I spent most of the movie saying "WTF?" Maybe if you've never read the original Robert E. Howard stories, you'd enjoy it more than I did.

Like Conan the Barbarian (1982), in and of itself it is a passable adventure movie, but the Kane has no more relation to the literary Solomon Kane than Conan did to Howard's Conan.

Even on its own, though, there were things going on that didn't make much sense or were disappointing.

Just a placeholder post, really.  I haven't posted much because I've been busy with stuff that doesn't relate to my typical content.  Autumn is still a few weeks away, but tonight is the end of Labor Day weekend, and the end of my having ten days off from the day job.

We had a nice time at the beach, though it appears while my daughter is a beach girl, my son could care less for the sand and oppressive sunlight.  Five minutes of splashing in the waves and he was done for the day.

One morning I took him for a stroll to a used book place and scored two John Jakes sword-&sorcery, non-Brak titles; Master of the Dark Gate and Witch of the Dark Gate.  Maybe they're sword-&-planet,  I'm not really sure.  Later that same day, I drove out to a further used book store and stumbled on a hard cover of Manly Wade Wellman's The Old Gods Waken. 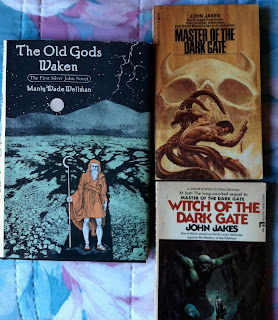 I also made the mistake over the past month of getting sucked into three books at once, not counting comics and graphic novels.  Given my current reading time per day,  I haven't finished any of them.  I did complete one graphic novel at the beach, so I hope to review that soon.

Work is going to be very busy and I'm behind on numerous personal goals at home, so I might have a quiet Fall around the "social media" circles.  We'll see.