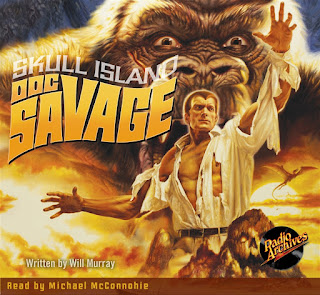 The book is roughly split in three sections. The first three chapters involve Doc and his gang employed as cleanup crew after King Kong falls to his death in New York City. After that prelude, we get a prequel tale featuring Doc, his father, and later his grandfather. Set in 1920, this tale contains a lot of the emotional dynamic between father and son. Doc is back from the war and reconnecting with his father. I believe a lot of groundwork and touchstones were included in this prequel story but I am not well-versed in Doc Savage. His "annihilator" machine gun is under development in this story.

The book clocks in at 400+ pages (according to Amazon.) That's a very long length for a Doc Savage story. Murray seems to have approached the tale as two shorter novels linked together - the first half deals with Doc and his father seafaring around the Pacific and Indian Ocean, searching for a lost schooner. They ran afoul of pirates.

I went in biased, of course. The initial seafaring story isn't bad but I was impatient to get to Skull Island.

The story got much better when they finally reached Skull Island. Lots of homages to KING KONG with clever references (spider canyon, dinosaur and ape evolutionary offshoots - which is why nothing on the island correctly matches the paleontological [is that a word?] record.) Lots of battles and derring-do.

I found some of the phrasing awkward and some word choices seemed to misuse the thesaurus. I don't know if that was Murray or if Murray was imitating Lester Dent.

Usually when I listen to an audiobook, I still consider it more of a 'read' than a 'listen.' But, it is worth mentioning details of this audiobook. Although this is put out by Radio Archives, it is a complete unabridged novel, not an audioplay. However, the narration very much sounds like an old radio show. In some cases this is good because the voice-acting is done well and the characters are distinct. On the other hand, it is a bit like listening to an overblown propaganda short from the 1950s or listening to Stan from AMERICAN DAD over emote even the simplest paragraph. It took a while to get used to it. Sometimes reverb is used for crowd and shouting effects.

So - felt a little long in the middle. I imagine in the old days it would have been two separate stories loosely connected. Fun romp in the end. If you're Doc Savage fan and/or a King Kong fan, you'll probably enjoy a lot of the book.
Posted by Paul R. McNamee at 11:00 AM 2 comments:

recent read; Warriors of the Wildlands 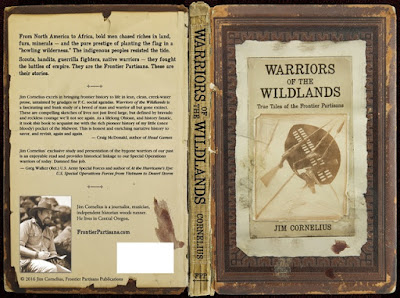 Warriors of the Wildlands by Jim Cornelius

For years now, on his blog site Frontier Partisans, Jim Cornelius has been focused on illuminating those men (and women) who lived on the edges of history. The edges where civilization pushed into the aboriginal and the world was shaded in gray. The frontier lands and the combatants such clashes created or molded. He also highlights current events and people who evoke such spirits (and sometimes ghosts.)

With Warriors of the Wildlands, Jim turns his pen to bringing together treatises on such people in the printed form. But this is no mere re-tread of his blog. Some of the historic figures explored have featured on his blog but the book expands on them. And the book includes plenty of new characters, too.

Wisely, Jim focuses on three eras to consolidate the spirit he wants to illuminate to modern readers.

We start in the Ohio Valley frontier of the late 1700s and early 1800s. The first "Western" frontier of the U.S. Manifest Destiny expansion. Bloody, hard fought engagements constantly raged in the area - French & Indian War, American Revolution, the War of 1812, continuing battles with displaced natives - until the native populations were finally quelled.

No collection of tales such as this can ignore the classic American West of the 1800s. We meet frontier fighters from both native America and American settlers expanding into their lands. Jim also brings us south, into Mexican-American skirmishes and disagreements.

Finally, we cross the Atlantic and are embroiled in late 1800s through early 1900s battles of Empires in Africa, right through and including World War I partisan operations.

The one modern touchstone is provided in the Epilogue, where Jim draws a straight line of ancestry from the guerrilla, scouting, and indigenous recruiting tactics of the Frontier Partisans of the past to allied operations in Afghanistan against Al Qaeda, the Taliban and Osama Bin Laden.

Many people find history dry or not worth their time. And some history books read like phone books. This book is a balm against such books and attitudes. These characters of the frontiers, these warriors, come to life and their (sometimes astonishing) exploits leap off the pages of Warriors of the Wildlands.

Put this on your bookshelf - especially if you enjoy learning the finer details of history.
Posted by Paul R. McNamee at 2:06 PM 2 comments:

recent read; Dead on the Bones 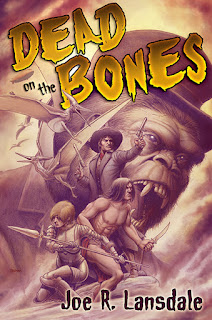 Dead on the Bones by Joe R. Lansdale

Dead on the Bones gathers some of Lansdale's pulpier adventure tales (though a murder-mystery and horror find their way into the table of contents, too.)

In the introduction, "Pulp Fury," Lansdale writes about how he came to his crime and pulp sensibilities through early television programs. Many of the shows adapted old pulp stories for material. It's an interesting note that Lansdale points out - pulp didn't really go away. It shifted formats.

"The Gruesome Affair of the Electric Blue Lightning"
Lansdale channels Poe, bringing us a new adventure of C. Auguste Dupin and the unnamed narrator, the dynamic duo from "The Murders in the Rue Morgue."

"King of the Cheap Romance"
Lansdale's entry from the Old Mars anthology. Angela King must transport vaccine and her father's corpse across the frozen Martian landscape. Oh, and keep one step ahead of the ice shark the entire way.

"Naked Angel"
A murder mystery with a victim found in a block of ice. In an alley. In Los Angeles.

"Dead on the Bones"
A horror story about murder, revenge, boxing, and voodoo.

"Tarzan and the Land That Time Forgot"
ERB sent Tarzan to the Earth's Core but never got around to sending him to Caprona. Lansdale does here, with a story faithful to ERB's Tarzan and worlds. The story first appeared in the Baen anthology, Worlds of Edgar Rice Burroughs

"Wizard of the Trees"
Lansdale's entry from the Old Venus anthology. More sword-&-planet, featuring an ex-buffalo soldier transported to the jungles of Venus.

If you're reading this post, then you probably have similar reading tastes to mine. If so, you want this book. Lansdale + pulp = gold!
Posted by Paul R. McNamee at 2:15 PM 1 comment: 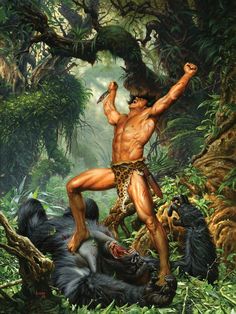 I don't know about resolutions. I joked about needing a mantra (several, really) for the new year.

On the health side;

On the writing & reading;

For further details on health; well, simple stuff, I hope. I need to lose pounds and I have high blood pressure. The meds work but I shouldn't make them work harder than they need to. Time in the woods is more a mental health thing. I look back and realize how much I used to head into the woods. I guess age (and the tick population explosion plus Lyme disease worries) put me shy to that in current years. There's a good loop around a reservoir in town. The one time we went we saw turkey vultures fairly close. I need to get over there more often.

Reading. I never really have a set plan. I do want to focus on writers I enjoy who I still need to read much more of - Glen Cook, Fred Saberhagen, A. Lee Martinez. Classics of pulp like Robert E. Howard (a lot of re-reads there, of course,) Leigh Brackett, Henry Kuttner. I would like to get back to science fiction - used to read it a lot as a kid. More in the space opera / military science fiction vein.

Slow down the book buying because I am running out of space. Start reading what I've been acquiring. Move some along when I'm done. I've been buying crazy these last few years trying to catch up on what I missed and keeping up with new things. I need to back off a bit and focus.

The NECON crew. In addition to the headliners (Cherie Priest, Laird Barron, Weston Ochse,) there are friends and other conference attendees whose works I want to read before July.

Writing plans. That would be telling ;) Let's say I need to finish at least one novel - the one I started at the River City Writers workshop. That's a horror novel. And, it will be horror if Jim & Chris come after me for not finishing it ;)

After that? I want to write another novel. Probably not horror for that one. This year I'd like to write two minimum - maybe three if I can swing it. I'm not imagining doorstop novels here - just the classic 60-70K words.

I have lots of ideas for short stories but those can wait while I get my novel-writing sea-legs. I hate missing exciting open calls or invites but as a friend pointed out - there will always be open calls and invites. I need to focus on longer work. I do have a short list of open anthologies. But I won't go much beyond that list. Even there - if the 'short' I need to write is taking too long to write, then I'm going to drop it in favor of novels.