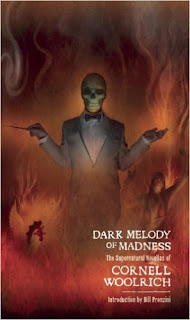 Woolrich is known for his mystery, crime and noir stories. In this collection of four novellas, we see a side not often shown - Woolrich working in the supernatural & horror milieu.

"Graves for the Living" tells an updated (for the 1930s) tale of Poe-esque obsession with premature burial. After his father is buried alive, a boy becomes obsessed with protecting himself from premature burial. As an adult, the man stumbles on a graveyard cult where people are temporarily buried alive to overcome their fear.  He is left with a choice of joining the cult or being executed by the cult to protect their secret activities. He chooses membership. Of course, things go wrong when his girlfriend gets involved. Technically, there is nothing supernatural in this story, but the story fits better under a horror banner or a "tale of terror" banner than any other classification.

"Dark Melody of Madness" brings us a step closer to the the supernatural. The main plot element, from a high level, isn't that far removed from "Graves for the Living" - a musician gets caught in a cult and chooses to join rather than die. This time around, however, the cult is a voodoo cult. And the musician steals their ceremonial song. The song becomes his signature hit on the nightclub circuit of New Orleans. The voodoo priest, Papa Benjamin, puts a curse on the man. Or is it all in the protagonist's mind? This story was adapted for the television series THRILLER under the title "Papa Benjamin" and has sometimes been reprinted under that title.

"I'm Dangerous Tonight" is the most plot ambitious of this collection. And it has the most direct supernatural element. One night in Paris, a demonic entity visits a fashion designer and leaves its cape behind. The seamstress uses the cape's material in a new dress. But contact with the demonic material causes evil thoughts of murder and mayhem, some of which are acted upon by hapless wearers of the dress. The plot then follows the dress, and an American detective whose path keeps crossing the dress as he tries to take down an international narcotics smuggler. Murder, mayhem, demons, drug gangsters, trans-Atlantic ship voyage, night clubs. I also thought some of the violent imagery - imagined and acted on - were quite shocking for something from 1937.

This is a case where the whole is greater than the sum of its parts. Anyone else trying to weave all these plot elements together probably would be left with a jumbled mess. Under Woolrich's pen, it all feels seamless. This was my favorite of these four novellas.

"Jane Brown's Body" was another surprise. This time, Woolrich tackled the "Weird Menace" genre. The tropes are all here - a mad scientist, an isolated lair in the deep woods, and beauty in distress, and our happy-go-lucky, rakish pilot of fortune, (Bad) Penny O'Shaughnessy.

This collection also starts off with a good introduction by crime writer and editor, Bill Pronzini.

I liked these stories a lot. Woolrich definitely puts his own stamp on this territory. He imparts frenetic, frantic desperation of panicked protagonists in a way that sweeps a reader along for the ride.
Posted by Paul R. McNamee at 9:45 AM 3 comments: 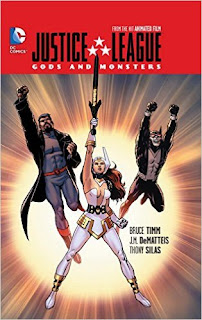 This collection serves as a prequel to the animated movie of the same name.

Each character - Superman, Wonder Woman, Batman - had their own prequel issue and then they joined forces in the 3-issue story arc.

The story involves a scientist who is creating super-humans. Do the Justice League see a potential threat to humanity, or are they merely jealous and want to keep their position of superiority?

For the most part, I enjoyed this book and I think it weaves nicely with the movie.

On the down side, the artwork sometimes confused me about action that was happening. The strong start of the story felt like it was going off the rails by the end. Personally, I wanted to know more about Luthor and how he ended up like he was in the movie, but this story wasn't about that. Maybe they can do another comic or movie.

The Hernan Guerra, son of Zod, Superman is growing on me. I liked him quite a bit after the movie and I like him, mostly, here. He is a character that has to grow on you. He has an abrasive side, for sure.

I even like the Kirk Langstrom vampiric Batman a bit more after reading this. In the movie his character didn't move me very much but he plays better in this story, I think. 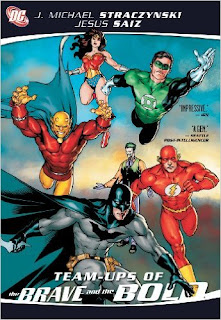 Team-ups of the Brave and the Bold

A thin book but some interesting team-up choices. Straczynski can write stories, and these are all solid, fun and some have poignant moments. We get Batman and Dial-H for Hero, Flash and the Blackhawks in the Battle of the Bulge, Batman and a really obscure hero from the 1960s, Brother Power. The Atom doesn't exactly team-up with the Joker but their story heavily involves both both of them. Wonder Woman, Zatanna and Batgirl have a night on the town.

Perhaps the most fun of the bunch is Aquaman teaming up with the Demon to stop an underwater interdimensional invasion. Mutated fish, resurrected drowned men, and a ruined city with angles that are all wrong. Yeah, they went there. And it was cool.
Posted by Paul R. McNamee at 10:45 AM 2 comments:

Coinciding with the premiere episode of HAP AND LEONARD, two Hap & Leonard ebooks were on sale last week. The first novel, SAVAGE SEASON and the story collection, HAP AND LEONARD RIDE AGAIN. 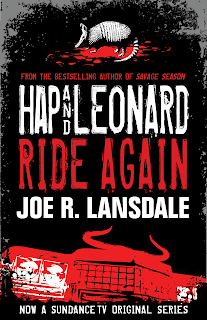 I bought them both.

I read them both.

I enjoyed the hell outta them. HAP AND LEONARD RIDE AGAIN also contains some great essays on the characters (including an 'interview' of Hap and Leonard by Joe Lansdale,) and about Joe Lansdale's writing.

Yes. I read two books within mere days of purchasing them. Will wonders never cease?

I also watched the premiere episode of the television show. It is a strong adaptation of the book. The characters are spot-on.

You can bet I'll be reading more Hap and Leonard. And Joe has some weird Westerns I want to read, too.
Posted by Paul R. McNamee at 10:50 AM 6 comments: