To round out my 31 reads for October, I turned to my Kindle while flying cross-country.  The plane ride gave me time for some novellas.

I've been curious about Brian Lumley, especially after learning he's written some sword-&-mythos tales.  As he describes it, he writes Lovecraftian tales, but his protagonists fight back (rather than faint.) Recently, some of his Cthulhu Mythos collection e'books went on sale.

I read two novellas, found in the collection, The Taint and Other Novellas. 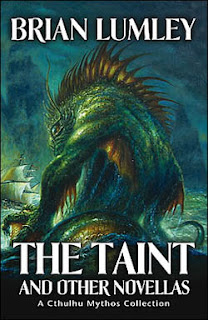 "The Horror at Oakdeene" - early effort in a strong Lovecraft mold, but with enough original touches to  have its own voice.  A writer who moonlights at a sanatorium finds himself drawn into the madness of a patient who dealt a little too closely with the occult.

"Born of the Winds" - this tale, though having a very convenient setup, was a good blend of the Wendigo legend with other Lovecraftian elements. 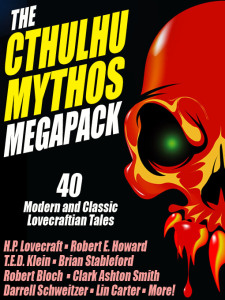 "The Graveyard Rats" by Henry Kuttner - I have read this before, but I want to get more Kuttner in my diet.  An unscrupulous Salem grave digger meets his fate at the hand of body-thieving rats - big rats.

"Envy, the Gardens of Ynath, and the Sin of Cain" by Darrell Schweitzer - this one surprised me, it is very good.  A lyrical tale of a domineering friendship gone bad.  A "black stone" even makes an appearance.

"Toadface" by Mark McLaughlin - somewhat humorous take on what happens when you displease the locals of Innsmouth.

(For those interested, the megapack also includes "The Events at Poroth Farm" by T. E. D. Klein.)

I finally watched the THRILLER episode of "Pigeons from Hell."  Currently, you won't find a more faithful Robert E. Howard adaptation.  My only dislike (and it is a small one) is that their twist ending was somewhat different, telegraphed a bit too early, and wasn't delivered with the same punch as the original story.

I read Karl Edward Wagner's "The River of Night's Dreaming", and then watched the episode of the old cable erotica series THE HUNGER, which adapted it.  I enjoyed the story which had a lot going on, and is one of those surreal stories where you can connect some of the threads, but nothing is spelled out.  It seems a lot of readers focus on the kinkier elements and miss the strong element of The King in Yellow being involved.  Predictably, the t.v. episode has no mention of The King in Yellow and is only tangentially related to the source material - and it is bland. 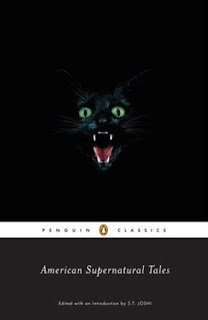 I bought this anthology a while ago, mostly because it contains "The Events at Poroth Farm" by T. E. D. Klein.  I read The Ceremonies years ago, and it is one of my favorite horror novels.  I have always wanted to read the original novella he rewrote into the novel.  This anthology also has a skewed selection - in a good way.  The stories here aren't the typical classics that you find in any given anthology, and I appreciate that.  Though, some selections did leave me a bit mystified.

Anyone who has read around Robert E. Howard circles, or H. P. Lovecraft circles, knows that Joshi doesn't have a lot positive to say about Howard (especially over Lovecraft.)  It's clear from the introduction and some of the story notes that some other authors are also worthy of his sneer.  Frankly, Joshi should leave his editorializing for critical writings.

While I didn't feel he maligned Howard too much this time around, he certainly has no love for Dean Koontz, and almost begrudgingly includes Stephen King (without reading more Joshi, though, I must admit his introduction to the King story is ambivalent at best.)

Anyway, taking Joshi comments with a grain of salt, I can appreciate this anthology he put together on the strength of its contents.

For those curious, here are the stories with dates of original publication; (I am including the list for those curious about my October reading goal.)

Rather than review them all, I'll just drop some thoughts here.

Currently, I have novel ideas but need to get them rolling past their rough outlines.  (maybe I should do that NaNoWriMo thing next month to get some traction.)

I do have a story that has a deadline, though, so that is probably my next project.  We'll go with that.  It will be novelette length.

What is the working title of your story/book?

What genre does it fall under?

I have two Halloween "bucket list" items.  The first is to watch a horror movie per day for the month of October.  I have not managed that one yet.  With no "man cave" and young children, I probably won't get to it anytime soon.  Though, I do try to watch at least one horror movie in October - sometimes I even manage to watch one on Halloween.

The second item on the list is to read one horror short story per day for the month of October.  I've been meaning to do that for a few years now.  I hadn't really planned on it happening this year, but I jumped in at the beginning of the month, almost on a whim.

I have been averaging reading one horror story per day.  I say "average" because my wife's birthday comes at the beginning of the month and I tend to get focused on that, forgetting that the Halloween season has started.  Also, I spent the past week away on a rare business trip.  But, I was able to catch up and front load my reading on the plane flights.

It is October 20th, and I have read twenty-one short stories and novellas so far.  Most of my selection is coming from a single anthology, American Supernatural Tales, edited by S. T. Joshi.  When I finish it, I'll put up a fuller review, but generally it's a really good selection of titles that usually don't make the standard classic horror anthologies.

I pulled some other stories from Kindle collections & anthologies while I was traveling - all Cthulhu mythos tales.  I've been in the mood for that lately for some reason or other.

I hope you're having a fun Halloween season, too! 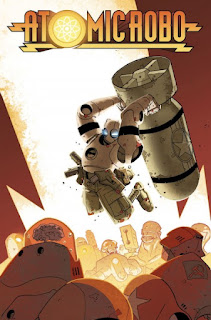 This was more fun than a comic should legally be allowed.

The setup here is straightforward.  In 1923, Tesla created Atomic Robo. Ever since, Robo has been battling the bad guys - Nazi super-scientists, giant ants, other robots and cyborgs - and even helping out NASA by getting the Viking explorer down to Mars (where we learn, Robo doesn't have a fondness for Stephen Hawking.)  Then there were those incidents with Edison summoning the ghost of Rasputin to assassinate Tesla and Jack Parsons' rocket.

While this has echoes of Hellboy, I think it stands on its own.  Certainly, if you enjoy Hellboy, I see no reason why you wouldn't enjoy this one.  Robo is a great, fun character - nearly indestructible with Spider-Man's fondness for quipping.  One blurb quote stated he was Iron Man with Indiana Jones inside the suit.  Robo is somewhere in the middle of all those comparisons.

I'll be buying the rest of the available volumes, for certain.  And most likely checking out some of other titles from Red 5 Comics. 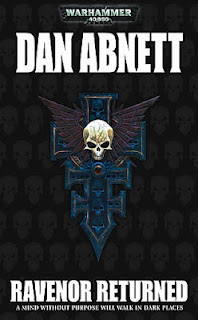 Dan Abnett is rapidly becoming a favorite author of mine.  He first impressed me with the Eisenhorn trilogy.  While not an Eisenhorn sequel, the Ravenor trilogy ties into Eisenhorn because the lead character, Gideon Ravenor, was an underling of Inquisitor Eisenhorn at one time.  A terrible accident left Ravenor disfigured and bound to a mechanized chair.  But Ravenor has tremendous psychic abilities, and he still carries on as an inquisitor.

Ravenor Returned is the second novel of the Ravenor trilogy.  I had read Ravenor a while ago.

Ravenor and his team continue to track Chaos-tainted artifacts that are finding their way into the higher echelons of Imperial hierarchy.  Unable to trust anyone but his own staff, Ravenor has gone rogue - an Inquisitor beyond resource or assistance from anyone officially.  Further complicating his dangerous mission, is the prophecy that one of his own team might bring about a world-shattering manifestation from the warp of chaotic sub-space.