As noted, I took a break from my current reads to sit down one evening with a Robert E. Howard tale.  I went for his historical fiction this time around, with a selection from Del Rey's Sword Woman and Other Historical Adventures. 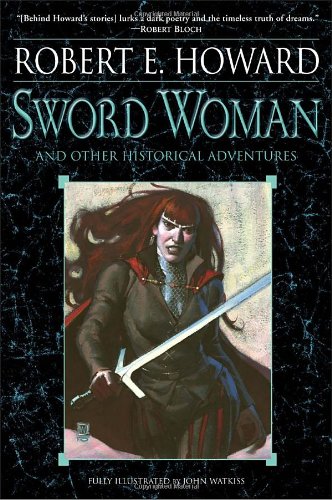 I was going to read "Blades for France" but then remembered I had bought the graphic novel of Boom Studios adaptation of "Hawks of Outremer."  So, I thought it was a perfect time to read and compare both.

"Hawks of Outremer" is a tight tale.  The main character is Cormac FitzGeoffrey, a bastard Norman-Gael who has thrown his lot in with the Crusaders.  Once a loose peace was established in Outremer, Cormac returned to Ireland but after a short stint fighting, peace broke out there, too.  Cormac returns to the Holy Land (Outremer) seeking to attach himself to a liege, only to learn that his liege of choice has been assassinated.  Plots are afoot between Muslims and Christian lords who want nothing to do with Saladin nor European kings.  Rather than jeopardize the peace with an armed force, FitzGeoffrey vows vengeance and embarks solo to deal death to those who deserve it.

"Hawks of Outremer" appeared in Oriental Stories in 1931.  The fantasy character Conan soon followed in 1932.  Cormac FitzGeoffrey does feel like Conan is bubbling under the surface.  Cormac is described as having blue eyes and a square-cropped mane of dark hair.  He might be slightly larger, physically, than Conan, but he moves with the same pantherish grace.  Even his armor barely makes a sound as he pads secretly through medieval fortresses. 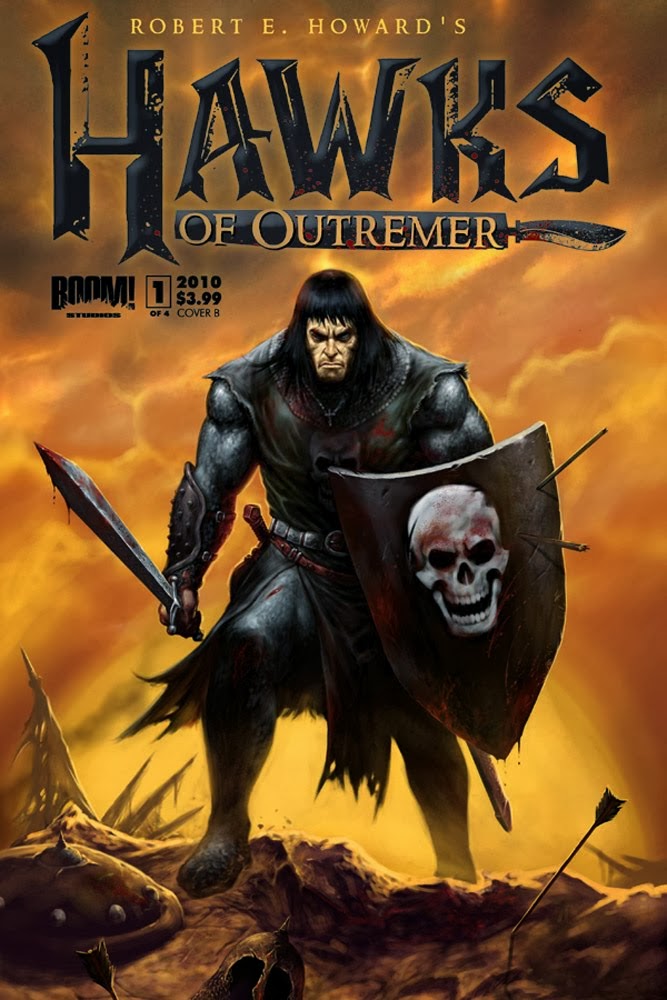 Now, onto the graphic novel.  Boom Studios were entirely faithful to the original tale.  There is hardly a difference, other than a few extra dead bodies and very, very slight dialog rearrangement.  The characters all resemble the descriptions provided by Howard.  All the dialog is word-for-word from the original, too.

The artwork is vivid and bloody.  This is truly a REH tale brought to colorful comic life.  The graphic novel also contains an insightful afterword by Mark Finn.

Well, like every other fan in REH-dom, I feel obliged to note the anniversary of the birth of Robert E. Howard, 108 years ago.

It's probably preaching to the choir at this blog, but I'll do it anyway.

It is cold here. So, this evening, instead of a beer I might look up a Hot Toddy or some other warm rum drink recipe.

That I shall imbibe whilst I read a historical fiction tale from REH, preferably one I have not yet read.


I might have been over this territory before, but I came to REH very late compared to most who discovered him as teenagers.  I had read some of his Mythos horror when I was in my Lovecraft phase.  REH didn't get on my radar that time around.

But later, in a used bookstore, this cover caught my attention and would not let go;

Having always had an interest in the Vinland Sagas and the Viking exploration of North America, you can only imagine how "Marchers of Valhalla" grabbed me, too and wouldn't let go.

I came to Conan, et al, a bit after that.

So there, in the mid-to-late 1990s, in my early thirties, my fervent acquisition of books by and/or related to Robert E. Howard began.

The rest, as they say, is history. 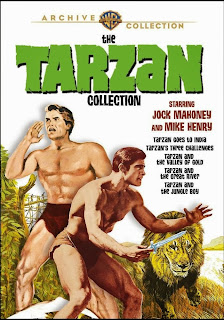 As I am reading the original Tarzan of the Apes, I also continue to explore some recommended movies.  I had bought this DVD set featuring movies from the 1960s, where Tarzan is played closer to the literary character - articulate and able to adapt and to transition smoothly from civilization to the wild jungle. 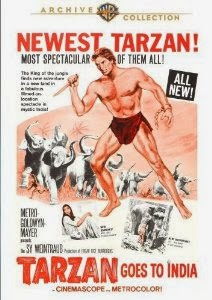 Tarzan in India, trying to save a herd of elephants from being destroyed when dam engineers flood their valley.  Jock Mahoney's first outing, taking over for Gordon Scott.  Stronger film than its follow-up, and Mahoney looked a lot better than he did in the follow-up - though, he still seemed lanky and he had an awkward gait which did not create a very convincing Tarzan.  It had an enjoyable story, though, with an interesting supporting cast of characters. 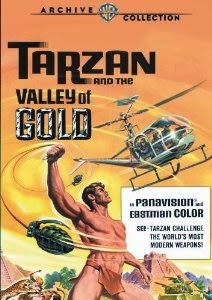 Tarzan and the Valley of Gold

Tarzan continues his globetrotting, finding himself in Mexico for this adventure.  The producers really upped the ante on this film.  Not only was a younger actor chosen to play Tarzan, they jumped on the James Bond bandwagon, too.  This movie comes complete with a maniacal villain who likes to dispatch people with clever little bombs inside jewelry gifts.  The budget shows, though, when a crashing helicopter hides behind a bush before it explodes, and the villain's private army has only two vehicles.

Not only was Henry a younger actor who looked the part, he also came from professional football.  It might seem an odd thing to note, but compare his Tarzan's motion when running with Jock Mahoney's gait - there is no awkwardness in Henry's dash and speed.

Also, it is worth reading Ryan Harvey's excellent Black Gate posts concerning both the movie and the novelization by Fritz Leiber. 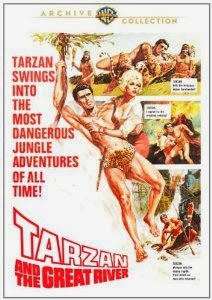 Tarzan and the Great River

Tarzan in Brazil, this time.  He must help a doctor bring medicine upriver while also investigating and halting a violent jungle cult.  This movie suffered from "stock footage"-itis the most.  The mixing of African flora and fauna is one thing.  But, here we see hippos and other African stock footage animals in Brazil.  Worse than that, though, was the extremely lazy use of footage of Africans setting fire to an African village, in the middle of a Mesoamerican attack on a Mesoamerican village.  (All 3rd world people were the same to 1960s Hollywood, I guess?)  It turns out the village footage wasn't stock, but was part of the story in the next movie.  Because they were both filmed back to back in Brazil, actors, sets and footage were reused.

The villain of the piece and Tarzan only meet at the very end, so there is an extreme lack of tension built.  Overall, I found this to be the weakest movie of the set. 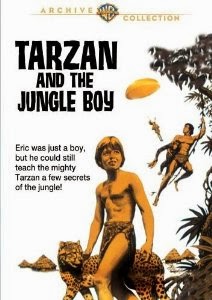 Tarzan and the Jungle Boy

Promising first act, second act sag, strong finish.  I think I enjoyed this Henry movie the most.  The James Bond hyperbole of Valley of Gold is gone.  We have a very straight-forward tale of Tarzan and company being swept up in a tribal leadership conflict between two brothers (played by real life brothers.)  Set in Africa (though filmed in Brazil) - the stock footage finally makes things more convincing rather than less convincing.  Tarzan is reflected in the young boy - also a jungle orphan - which is a nice touch.

Overall, I really enjoyed Henry's performances.  Without a doubt, Mike Henry looks the part of Tarzan more than anyone who has undertaken the role.

His acting was a little stiff but not horribly so.  I think the biggest weakness was that sometimes he sounded more like a cinematic cowboy than the king of the jungle.  It's too bad he bowed out before the television series started (which went to Ron Ely, instead.)

The movies are all fun viewing for a rainy Saturday home matinee, if nothing else.
Posted by Paul R. McNamee at 10:30 AM 4 comments: