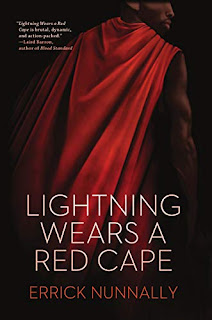 Bringing something new to the superhero genre isn't always easy. Making superheroes pop off the page in prose is a tall order, too. And then, if an author wants to bring a proper measure of reality to their superhero story without taking a "tear it all down, this could never happen in real life" deconstruction attitude, that writer needs a deft touch.

Errick Nunnally can do all that. His new novel, LIGHTNING WEARS A RED CAPE, proves he can.

From the city to the statehouse, a quartet of super-powered criminals are pushing the power of their gangs' influence as far and as high as it will go. At the street level, altruistic heroes--super-powered and merely human--find themselves pulled into the widening conflict.

Nunnally's love of comics and superheroes comes through. His superheroes show roots and have their own angles. Atlas, the super-cop. Thunder, the Puerto Rican Amazonian Wonder Woman and her speedster sidekick, Lightning. Shade--the space war veteran who just wants to live in peace and help his community thrive--like a skewed reflection of Green Lantern John Stewart.

And Shango, the unstoppable wildcard, an African god of thunder.

Other heroes in the shadows, discovering new abilities, waiting for their time to shine.

Nunnally keeps the reader engaged throughout. The action scenes flow. The downbeats push the plot along exactly as they should. When novel rockets into the climax, the action does not let up.

I recommend you read this excellent book. It's an important genre novel--it opens windows on the minority experience woven flawlessly into the narrative. Something Errick Nunnally does extremely well.

LIGHTING deserves a sequel, and I can't wait to read that, too!
Posted by Paul R. McNamee at 4:25 PM No comments:

Back to the Valley of Gold


TARZAN AND THE VALLEY OF GOLD

I've been revisiting the late 1950s through 1960s TARZAN movies with my son. Yesterday we watched TARZAN AND THE VALLEY OF GOLD. (which I've touched on before)

It's a crazy mix of modern world Tarzan, James Bond pastiche, Tarzan pastiche. On the 007 side, the main baddie is pure Bond villain. Tarzan first appears in a suit, fighting assassins in Mexico City. The jazzy soundtrack. For Tarzan moments, we see Tarzan suiting 'down' to the loincloth and requesting a knife and a length of rope. His use of the animals (leopard as tracker, chimpanzee as scout, lion as his army) has echoes of original Tarzan novels (Beasts of Tarzan, Tarzan the Untamed.)

The sum of the parts never really adds up. The story's scope & vision far exceed its budget. The climax drags on too long.

But it's a favorite. Maybe because Mike Henry is a physical cast perfect for Tarzan--and Nancy Kovack is quite fetching. Or maybe I just enjoy the audacity of what they were trying to pull off.

I think it's a fun way to spend a ninety-minute weekend matinee.

The Fritz Leiber novelization was recently re-released. It takes the story where it could have gone and adds a lot to it. Maybe not worth the current collectible hardcover price for casual fans but when it comes out in paperback or ebook, you might give it a read, if you're a pulp / action adventure fan. 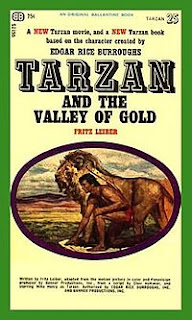 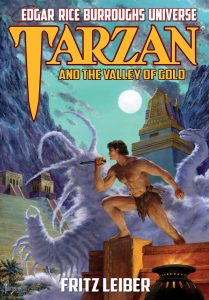