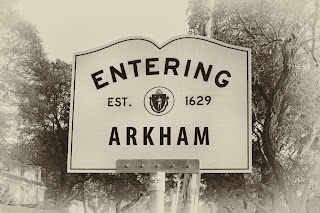 When the first cool, post-August day breezed in, I began to turn my attention to thoughts of Autumn reading, which of course means Halloween and horror stories.  I have a hankering to return to the Cthulthu mythos, which I haven't read deeply for some years.  I am hoping to get through one if not two of Brian Lumley's Titus Crow novels, as I enjoyed his stories last year - one of which was a Crow tale. 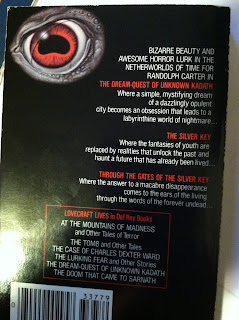 Being on a Mythos kick lately, I investigated the availability of the Chaosium Call of Cthulhu Fiction series, which I missed the first time around.  The first entries in the series are long out-of-print, of course, and I'll need to monitor eBay and ABEBooks.  But, it turns out that Chaosium have a large selection of "Boo-boo Books" - books that have wandered between stores and warehouses and have some scuffing or slight crumpling of cover corners - and they sell them at half-price.  While none of the classic ones seem available (shopworn or not) - e.g.; The Book of Iod - I couldn't resist expanding my Mythos library a little. 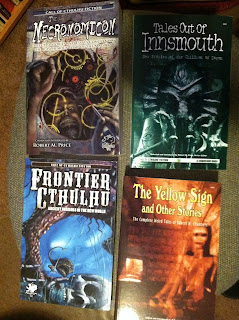 I could have gotten some e'books, but sometimes you just want print.  Plus, I have some new bookcases on order.  :)   (Hey, I am also moving some books along, really I am.)

It feels creepily good to wander the haunted hills of the surrounding countryside and walk through the darkened streets of gambrel-roofed houses of timeworn Arkham again.
Posted by Paul R. McNamee at 10:15 AM 7 comments:

Doctor Who: The Dalek Project 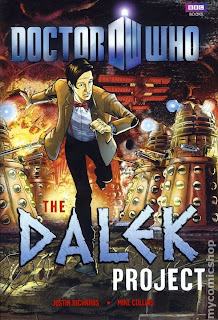 Doctor Who: The Dalek Project.

This graphic novel has an interesting genesis history.  Originally, it was slated to be a 10th Doctor story, but it had similarities to a television episode of the 11th Doctor, "Victory of the Daleks."  The episode aired nearly at the same time the book was to be released, so the book was put on hold.

Now, it has been resurrected as an 11th Doctor story (though, using the 10th would have distanced it from the t.v. episode - but, whatever.)

Finding Dalek remains while excavating a World War I battlefield, a group of archaeologists soon need the Doctor's assistance when the Daleks come to life.   The story then moves back in time, to the First World War, where the Doctor happens upon a strange house of an English munitions manufacturer.  Certain rooms open to other vistas - trenches on the European front, and a similar munitions factory in Germany.  Both sides believe they have created the ultimate weapon that will win the war - Daleks.  It's the Doctor's job, of course, to show everyone how wrong they are and to stop whatever master plan the Daleks have engaged.

Visuals are good.  I enjoyed the rendering of the primitive proto-Daleks with their tread tracks, heavy machine guns and iron crosses.

This was a fun comic, and I liked it a bit more than its predecessor, The Only Good Dalek.