Thanks to the iPad, I've been tearing through comics lately.  In addition to many single issues (some of which have added series to my wishlist, some which have not) I've read a few collected arcs.
Superman Beyond is new digital exclusive title from DC, though this collected edition was available in trade paperback (which is how I read it.)  Set in the Batman Beyond universe/timeline, the focus here is on an older Superman in the future.  He has recently come out of "retirement," and must face a new era without the friends and family who used to keep him centered.  Battling Lex Luthor (and Luthor's post-death plans,) future super-cops gone rogue and alien oppressors, Superman squares off against the future and his own misgivings & doubts.  I think there was a lot of good going on here, and I plan to continue on with the series - as well as adding Justice League Beyond and Batman Beyond to my wishlist, too.
Welcome to a world where dinosaurs never died out.  Mankind live in fortress-cities reminiscent of feudal Japan.  When the big, hungry lizards come calling, it's time to call out the Predator Defense League - experts in ways to kill T-Rexs and other nasties.  This wasn't exactly what I was expecting, but it is still an enjoyable dino romp with politics and religion in the mix.  One complaint is the art-style which is fine but occasionally I felt faces looked too much alike and I lost context a few times on close-ups.  Red 5 Comics just started up a 4-issue sequel, which I will probably be reading in the future.

Hellboy is a hero, but what heroes inspired Hellboy?  Well, Lobster Johnson was one.  A pulp/noir fighter of crime & evil, Lobster dispatched the baddies with a claw-mark burned in their foreheads.  When mobsters playing Indian (Native American) ghosts try to stir up New York City, Johnson is determined to get to the bottom of things.  But, the occult trappings might be more than trappings, as mobster-fighting leads to deeper, darker things.  This is great, fun stuff.  If you like Hellboy and/or pulp adventures, this will satisfy.
While Dark Horse uncoupled from the faithful Conan adaptation wagon with their (IMHO) horrible and loose Conan the Barbarian main title, it seems maybe they were hedging their bets by producing some excellent King Conan titles.  The Phoenix on the Sword was the second tale directly adapted from Robert E. Howard under Dark Horse's own King Conan series (as opposed to Marvel reprints.)  (The Scarlet Citadel was first, and The Hour of the Dragon starts soon.)

This is truly excellent.  The adaptation is faithful, though bookends have been added.  The artwork pops off every page.  It is as detailed as the old black-&-white The Savage Sword of Conan, but in full, glorious color.

note: I believe all these titles are available in trades (Neozoic was recently reprinted,) or digital through Comixology and/or Dark Horse.
Posted by Paul R. McNamee at 7:00 PM 1 comment:

The Doctor vs. the Daleks

In the last quarter of last year, Big Finish ran quite a few sales on their Doctor Who line of audio-dramas if you went the download route.  I had some of the initial CDs, but lost track for a while.  It seemed like a good time to get back into it.  Being a Whovian, having the CDs as collectibles is always tempting, but the downloads were priced very low at sale time, so I skipped the CDs (also saved shelf space at home.)

Lucie Miller and To The Death are two parts of a single tale that closes out the 8th Doctor's 4th Big Finish series.  (The numbering is a little confusing because Paul McGann also had many 8th Doctor Adventures in the main release line before they spun him out specifically.)

Anyway.  The Daleks are back.  Back on Earth.  Back in the 21st century.  Lucie Miller, the Doctor's off-and-on again companion for most of this season is trapped, crippled by a disease unleashed by the Daleks before their invasion.  The Daleks are following a very familiar pattern.  Susan - the Doctor's granddaughter - is exiled on Earth and she notes it is the same as before - referencing the television serial, The Dalek Invasion of Earth.  And the Doctor has failed to answer desperate summons from his friends and family. 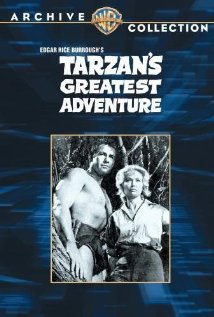 I'm not very versed in Tarzan.  I've seen a few movies, and I've read the first novel.  Recently, two strong recommendations for this movie appeared in my web-crawling circle.  Noted by both Charles R. Rutledge and Ryan Harvey, I knew I needed to give this one a viewing.

When greedy diamond prospectors steal dynamite from an African village and murder his friend, Tarzan picks up their trail to exact vengeance.  Along the way, he picks up a feisty blonde companion, Angie.  Jungle dangers abound as Tarzan comes closer to his prey, and the psychological pressure on the villainous band soon has them tearing each other apart, even as they battle against Tarzan.

Don't let the black-&-white stills fool you, this movie is in color.  As noted by others, it was filmed on location in Africa, getting away from the stagnant movie sets of the past.  Gordon Scott's Tarzan is no longer monosyllabic, but neither does he speak eloquently as an English Greystoke might.  While Scott might not have been the best deliverer of a line, as Tarzan his delivery works very well.

One drawback; there is a notable absence of Tarzan through the fourth fifth of the movie.  Wounded and out of commission, Tarzan mostly falls off-screen while the focus shifts to the heroine and the villains.  I was enjoying Scott's Tarzan portrayal enough that I found the absence distracting.

As someone who did not grow up with jungle adventures, I did have a little bit of disconnect when the movie went into "stock footage" mode - mixing terrain and animals that would never be found that close together.  (e.g.; From the heart of a thick jungle, Tarzan and his companion observe a lion hunt & kill on the veldt!)

But, this isn't about accuracy, it's about having a grand adventure on the Dark Continent.  As a fun throwback to Saturday matinee adventure films, Tarzan's Greatest Adventure hits its mark and does so strongly.