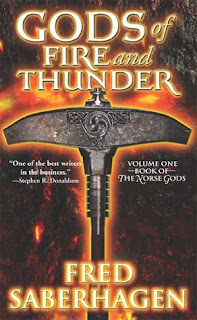 With GODS OF FIRE AND THUNDER, Saberhagen delved into Norse myth and legend to weave a novel.


Haraldur the Northman once joined Jason on his fabled quest for the Golden Fleece, but now he wants nothing more to do with gods and adventure. Returning to his homeland for the first time in many years, he hopes only to settle down on a farm of his own—until he comes across an impenetrable wall of Eldritch fire and a lovesick youth determined to breach the wall at any cost.
Behind the towering flames, he is told, lies a beautiful Valkyrie trapped in an enchanted sleep, as well as, perhaps, a golden treasure beyond mortal reckoning. It is the gold that tempts Hal to agree, against his better judgment, to assist the youth in his quest.

Declared as 'Book One of the Norse Gods,' the novel is also the fifth book in Saberhagen's 'Gods(Masks)' series. The first four novels deal with Greek myth and legend.

If you've come for a hard-hitting Viking tale, this isn't it. Saberhagen's story concerns the gods, ghosts, gnomes, and other trappings of the Norse myths. The gods aren't truly gods--they are people who have acquired magical masks which transform them into gods. The Masks are a good hook and the characters and their interactions are enjoyable. (I still wonder if the series is in any way connected to Saberhagen's SWORDS world. It has a similar setup.)

It's a solid time-passer as a fantasy story. If you seek blood & thunder and clashing Viking hordes, you need to look elsewhere.

The Masks concept is interesting. Not enough for me to rush out and immediately find the other books in the series. But enough that I might return to the series sometime in future.

If I spot them cheap enough during my bookstore travels I would probably grab them. 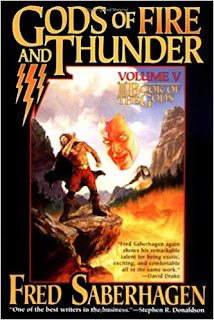 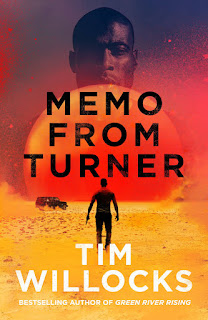 MEMO FROM TURNER by Tim Willocks


What happens when a man of absolute integrity finds himself trapped in a world of absolute corruption?

During a weekend spree in Cape Town a young, rich Afrikaner fatally injures a teenage street girl with his Range Rover but is too drunk to know that he has hit her. His companions – who do know – leave the girl to die.

The driver’s mother, a self-made mining magnate called Margot Le Roux, intends to keep her son in ignorance of his crime. Why should his life be ruined for a nameless girl who was already terminally ill? No one will care and the law is cheap. But by chance the case falls to the relentless Warrant Officer Turner of Cape Town homicide.

When Turner travels to the remote mining town that Margot owns – including the local police and private security force – he finds her determined to protect her son at any cost. As the battle of wills escalates, and the moral contradictions multiply, Turner won’t be bought and won’t be bullied, and when they try to bury him he rediscovers, during a desperate odyssey to the very brink of death, a long-forgotten truth about himself...

By the time Willocks's tale is finished, fourteen men have died. He shows once again that he is the laureate of the violent thriller.

As you can see from the synopsis, this might be filed under crime thriller but the story is a modern western. An incorruptible officer of the law, wading into mining territory controlled by a big boss who will stop at nothing to protect their offspring? What could be more western?

Warrant Officer Turner is determined--a man of honor who will uphold the law until the bitter end, like any good sheriff of old. He encounters corruption and resistance at every turn.

With Willocks, we can expect a spaghetti western, too. We get one, sure enough. Willocks lays out the characters like chess pieces, and the tension builds as events and people are moved into place for the showdown.

Willocks pulls a bit of a feint. The violence arrives and it starts off not quite so visceral as I would have expected. But then the plot hits its major twist and Willocks again casts an unflinching brutal eye over the madness of violence and survival. Not for the squeamish.

I enjoyed this one a lot. Recommended if you like crime fiction and/or bloody westerns. It moves right along. I read it in a few days.

MEMO FROM TURNER has not been published in the U.S. It is available via second-hand sellers through Amazon, ABEBooks, and other sites.
Posted by Paul R. McNamee at 11:02 AM 3 comments: