Stumbled on this one from Arcana during a Comixology sale. It intrigued me as Kade seemed - from a quick glance - to be a combination of Karl Edward Wagner's Kane and Barry Sadler's Casca.

Although the cover clearly indicates a WW2 adventure, the blurb mentioned turn-of-the-20th-century Cossacks, which made me even more interested. I was a little disappointed the Cossack section didn't last very long. I think it would have been more interesting. The story largely involves Kade chasing after Lucifer. Lucifer is impersonating a German officer (Sympathy for the Devil?) and trying to raise an undead army in a most gruesome manner. Kade just misses Lucifer more than once, usually at a physical cost - including years of 'death.'

This story did not make clear to me (nor was there a foreword to explain) where Kade comes from. I can't tell if he is man, demon or angel. He is immortal and he feels no physical pain. Once I figure out which book is the first one, it might have his origins.

There are quite a few of these Kade collections, and in the back of this one, they list each era & location were each story is set. I already have a couple more (it was a half-price sale) and might get some more if I like those.


Onto the jungles of Africa, where Dynamite Entertainment revived the old King of the Jungle...- Thun'da. As Tarzan knockoffs go, I didn't find Thun'da too bad, and hey - originally created and drawn by Frank Frazetta!

Roger Drum is an Army specialist who crash lands in a strange land populated by dinosaurs, Stone Age tribes and other nasties. The crash gave his partial amnesia. He tries to piece together his memories as he fights to survive and climb to the top of the food chain.
The very nice touch here is that each issue includes original Thun'da comics, drawn & created by Frank Frazetta (and, a lot of the stories were written by Gardner Fox.) It also allows you to follow the revamp and see where the new stuff came from. Very neat.


Last up, we have a Mike Mignola entry, Sledgehammer 44.

I enjoyed this, but I must say... - the opening and the opening of Atomic Robo's first tale are very similar. I sure hope that is coincidence. In each case, the metal heroes are delivered into an enemy position via a bomb, from which they then exit. Someone else already did the footwork.

I found a little thread here, too. The Sledgehammer suit predates Robo, but the Robo story and layout predate this Sledgehammer 44 spinoff. And the Sledgehammer is just a suit (a'la Iron Man) whereas Robo is an actual robot.

Anyway, once the story got rolling, it was certainly its own entity. I enjoyed it enough to try another Sledgehammer 44 title sometime in the future.
Posted by Paul R. McNamee at 7:40 PM 1 comment:

Seeing as how lots of Carnacki pastiches have been popping up on my radar lately, I figured it was time to read the original tales.

Carnacki was an occult investigator created by William Hope Hodgson, best known in Lovecraftian circles for his novel, The House on the Borderland. 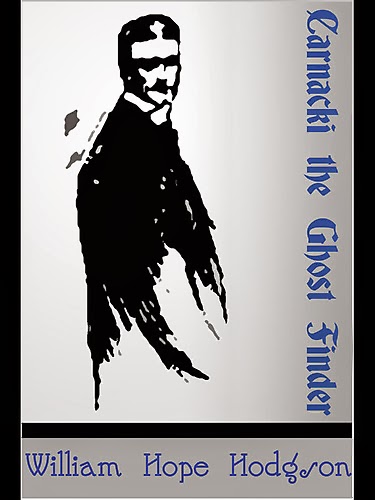 Each story is laid out as Carnacki relates a tale to friends after a formal dinner. Some tension is lost there, as we know Carnacki will survive the haunting. It makes of a bit a repetition when reading all the stories in one pass - but often collections are like that.

It is interesting that Hodgson, for all his formulaic presentation of Carnacki stories, keeps the reader guessing. Some stories end with a hoax being exposed, others are true hauntings, and in the case of "The Horse of the Invisible," there is even a surprise double feint.

I enjoyed the main body of six stories (see the Wiki link above.) I really liked the idea of Carnacki experimenting with technology and naming fictional magic rituals. I don't know the full extent of influence on Lovecraft from Hodgson's work, but there are certainly connections.

It fits that the final three stories of the collection were posthumous. Each has elements not found in the typical Carnacki story. I wonder if Hodgson ever meant them to see the light of day as Carnacki tales. "The Hog" is too long-winded and bogs in pseudo-science and cosmic terrors. Similar cosmic swine make an appearance in The House on the Borderland and the concept is more fitting outside of the Carnacki milieu. "The Haunted Jarvee," which does work as a Carnacki tale, is set at sea aboard a ship instead of the usual land-based haunting. The final story, "The Find," is not ghost or haunting related at all, and Carnacki is played as pure mystery sleuth trying to suss out the appearance of a rare book (and it's not even a grimoire!)

Dovetailing with the reading, I also learned there was a single television adaptation of Carnacki during the 1970s, on the British show The Rivals of Sherlock Holmes. "The Horse of the Invisible" was adapted, with Donald Pleasence starring as Carnacki. It's on YouTube if you don't want to shell out for the entire series. 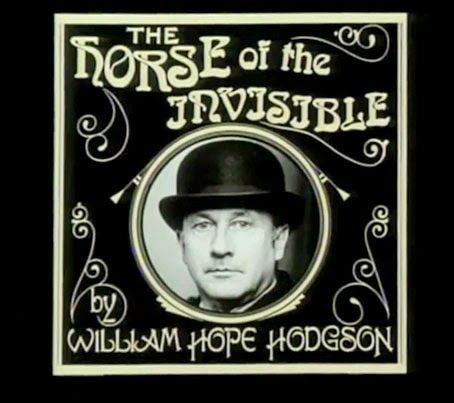 Given the book illustration, Pleasence seems an odd choice. But, the original stories never physically describe Carnacki, anyway. As for personality, the literary Carnacki has an intensity that Pleasence ignores or did not know about - his Carnacki is very laid back. I did enjoy how he played Carnacki's rational side, not coming to any supernatural conclusion immediately. He constantly examined people's potential motives for creating a hoax of the horse.

The dramatization is what you would expect from mid-1970s British t.v. Videotape (not film) and sets that look nice but seem like the walls might come down at any minute. The reveal of the horse at the end both points to a low budget - and, frankly, made me realize that what seemed plausible in the written word of the story, once enacted, makes you doubt the hoax could have been so well executed at all in reality.

The adaptation closely follows the original story. Very faithful, even to the double-feint "it was all a hoax... - but something supernatural is there, too."

I thought there were two sadly lacking visuals, though. The first being the turning point of the supernatural aspect of the plot. Carnacki photographs Mary Hisgins in the dark cellar, and when the photo is developed, a horse's leg and hoof appear to be descending from the ceiling over Mary's head. I fully expected a mocked up photo to make its way before the television camera, but it is a case of "tell not show" as Carnacki merely describes what he is seeing on the photo he is handling.

My biggest disappoint was the "Electric Pentacle." Instead of something full of glowing Tesla tubes and Edwardian-Punk, the pentacle is realized as a pentagram of twisty electric wires. The budget strikes low, again! 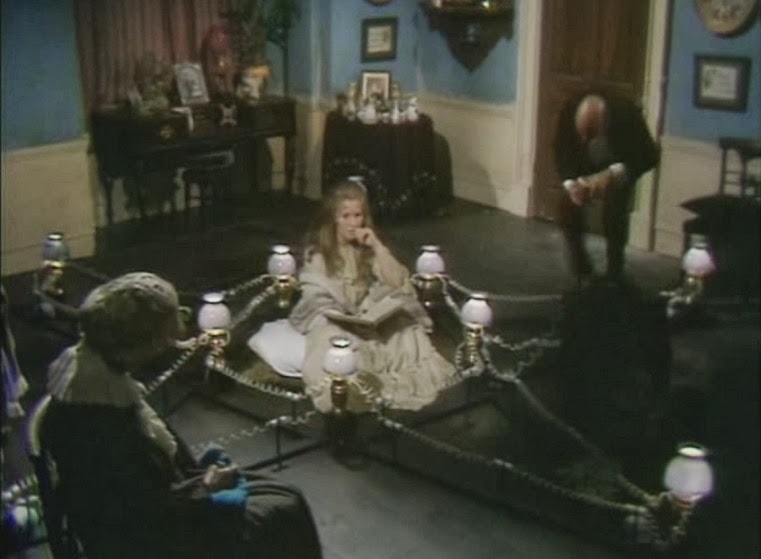 All gripes aside, though, I mostly enjoyed watching the episode. It's too bad they never tried another Carnacki during the run of the show.
Posted by Paul R. McNamee at 7:45 PM 3 comments: