recent read: Pirates of the Levant

Pirates of the Levant by Arturo Perez-Reverte

It is 1627. Captain Alatriste and his young protege, Inigo Balboa--now both soldiers of Spain--find themselves assigned to the Spanish naval infantry, serving on privateer vessels based out of Naples. The Spanish ships prowl the Mediterranean, competing with the other political powers of the region. Of course, they are privateers, operating with the blessing of the Spanish King, and all the other European powers are pirates.

And then there are the Turks--the Muslims and the Catholic Spanish are eternal enemies.

There is not a straight plot through-line in this novel, other than the dramatic tension of Inigo and Alatriste being at odds with each other as the young man tries the establish his own identity. Otherwise, the story is episodic naval adventures highlighting the breadth and scope of the Mediterranean in the early 1600s.

At first I thought having Alatriste become a Marine was a forced excuse to write a pirate novel. But as usual, Perez-Reverte's historical veracity pulled me into the story in short time. PIRATES OF THE LEVANT is as fun, exciting, and historically interesting as any of the other Alatriste titles. If you're a fan of the series, you shouldn't be disappointed in this one, either.

I listened to the audiobook for this one.

If you've been following my Captain Alatriste reviews, you'll notice I've jumped over THE CAVALIER IN THE YELLOW DOUBLET. That's because it wasn't on audio, so I skipped ahead. The novels can be read out of order. I'll double-back soon enough.

Maybe by then, El puente de los asesinos, (THE BRIDGE OF ASSASSINS,) the (currently) last Alatriste novel will finally get an English translation.
Posted by Paul R. McNamee at 9:54 AM 3 comments:

Last year, I posted about being accepted to the sword-&-sorcery anthology, THE MIGHTY WARRIORS.

Well, sometimes things in publishing take awhile. But good things come to those who wait, right?

THE MIGHTY WARRIORS is out in paperback now from Ulthar Press. Kindle eBook to follow.(edit: Kindle version now available)

And my-oh-my, just dig that risque art by the one and only Bruce Timm! 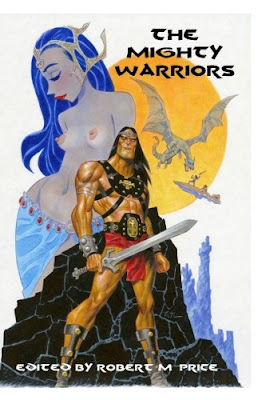 (You might want to order soon in case Amazon has an issue with the cover.. could be a collector's item .. just sayin' ;) )

The Amazon listing is sparse. Fortunately I have the means to let you see the table of contents.

"Know, O Prince: An Introduction" by Robert M. Price
"Spawn of the Sea God" by Adrian Cole
"The Corpse's Crusade" by Cody Goodfellow
"Thongor in the Valley of Demons" By Robert M. Price
"The Shadow of Dia-Sust" by David C. Smith
"Amudu's Bargain" by Charles R. Saunders
"The Secret of Nephren-Ka" by Robert M. Price
"The Temple of Light" by Milton J. Davis
"Kiss of the Succubus" by Charles R. Rutledge
"The Living Wind" by Ken Asamtsu, translated by Edward Lipsett
"The Last Temple of Balsoth" by Cliff Biggers
"Lono and the Pit of Punhaki" by Paul R. McNamee

This is an incredible lineup of authors and heroes - classic and new. Not only is Robert M. Price delivering a Thongor story, Adrian Cole is tackling Henry Kuttner's Elak of Atlantis, again. (I covered Cole's first foray in this post last year.) And the incomparable Imaro appears from the pen of Charles R. Saunders himself!

recent read; DARKER THAN YOU THINK 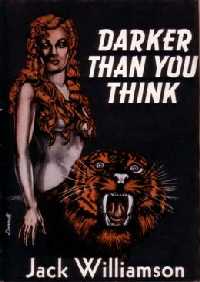 DARKER THAN YOU THINK by Jack Williamson

Will Barbee, an alcoholic small college town reporter, is pulled into a noir-ish nightmare of witchcraft and  lyncanthropy. The deeper he goes, he discovers horrifying secrets about the history of mankind and about himself.

Or, is it all in his head? Has the beautiful, red-headed April Belle bewitched him into devilish deeds, or is his unconscious mind simply playing out his jealous desires?

Written in 1948, by now most of the surprises in the story were predictable. But Williamson works with the suspense of Barbee not understanding what is happening, while the reader does. And that works, too. When will Barbee figure it out? What choices will he make?

Williamson, being a science fiction writer, injects the lycanthropy with pseudo-physics and it suspended my disbelief well enough. It's tricky to try to justify any trope with real world rules.

Near the end, there are reveals. Some worked. One in particular I didn't feel had been setup at all, though.

I don't know if certain writers were influenced or even had read DARKER THAN YOU THINK but there are threads seen later in THE OMEN and ROSEMARY'S BABY, to name a few.

I enjoyed DARKER THAN YOU THINK for its craft and darkness. It deserves its status as one of the great horror and/or werewolf novels. 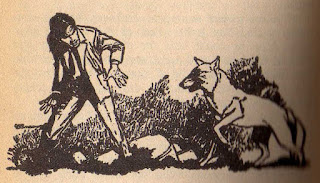 DARKER THAN YOU THINK is also available via Audible.
Posted by Paul R. McNamee at 12:17 PM 2 comments: 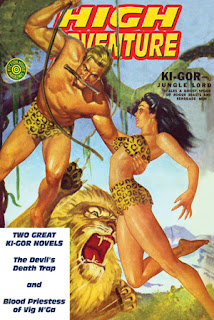 Keeping with my resolution for more 'zines in my reading mix...

I swung back into the jungle pulp, following up last year's Ki-Gor read with two more of the better Ki-Gor tales, "The Devil's Death Trap" and "Blood Priestess of Vig N'Ga." Luckily, both stories are included in this single volume.

"The Devil's Death Trap" finds Ki-Gor and his stalwart companions trapped in a lost city of intelligent gorillas (shades of DC Comics' Gorilla City!) "Blood Priestess of Vig N'Ga" also features a hidden city--this one more of a classic Middle Eastern flare. While the former story had echoes of Edgar Rice Burroughs, the later tale had echoes of Robert E. Howard.

Both delivered on pulp fun and adventure.

Unfortunately, this issue (or my copy, anyway) has a glaring misprint in "Blood Priestess of Vig N'Ga" that repeats a page and left out a piece of the story. Fortunately, there is an archive available here. I need to check this out and fill in the gap.
Posted by Paul R. McNamee at 10:42 AM 4 comments: 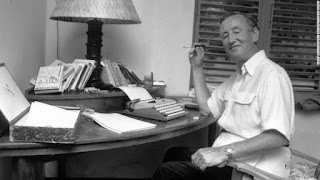 Current short term writing goals;
Check back in 30 days to see how I did!
Posted by Paul R. McNamee at 10:00 AM 2 comments: