This past Friday I was fortunate enough to attend one day of "Camp NECON" in Rhode Island. (It is a 4 day affair, but I figured I would ease into it considering family time demands, etc.) NECON is the abbreviation New England Horror Writers Convention. I don't know why HW is left out of the acronym - I guess it's not as fun to say. And NECON is fun!

I haven't really tried my writing pen on horror in a long time, but there have been some short stories in that vein of late on my computer. I've been reading more horror lately, and a lot of the writers attending are genre-crossers anyway.

I met Charles Rutledge and Jim Moore in person. Charles showed me all the ropes. We spent most of the day together and with others chatting & socializing.  I cursorily had brief greetings with Amber Benson, Kasey Lansdale and Christopher Golden, among higher profile names you might recognize.

I met and bought a pile of signed books from Darrell Schweitzer, plus a few other books.
I just missed meeting F. Paul Wilson as he showed up just as dinner started, and I headed home afterwards.

Aside from those names you know, I met plenty of other friendly, considerate, passionate and kind folks. The panels were fun. The informal KaffeKlatsch discussions were informative and fun.

I must thank Charles publicly for including me. Learning that he had been in my backyard (so to speak) last year, I wanted to meet up this year. Then I figured I didn't want to just third-wheel my way into a dinner, so I decided to do at least a day of the convention properly. And Charles agreed that was a fine plan.

I ate well, I talked writing and books and genre and Doctor Who and I had a blast.

The unfortunate bit was that this is NECON's 34th year, and the convention founder and organizer Bob Booth died last year, so I never met him. But there was a wonderful tribute to the man, his legacy. We watched an interview where he went over the history of NECON. It was touching and very informative.

And that was all in one day! And I didn't even get to stay for the evening stuff!

NECON is a great, small, no pretensions, all inclusive little convention.They do keep it small. But, if you ever get the chance to go, especially if you know someone else attending who can guide you through the first time, it's is absolutely worth the experience.

Great motivation, too. I can't show up empty-handed next year, or Jim Moore will look me in the eye and say, "Write your damn book." ;)
Posted by Paul R. McNamee at 9:59 PM 4 comments:

Fred Saberhagen is one author I made a point to read more of this year.

I didn't think I'd read three of his in a row, but seeing as how I had them in omnibus form, I went ahead with reading the entire first trilogy of his Swords novels. (I did take some breaks between to read other material.) 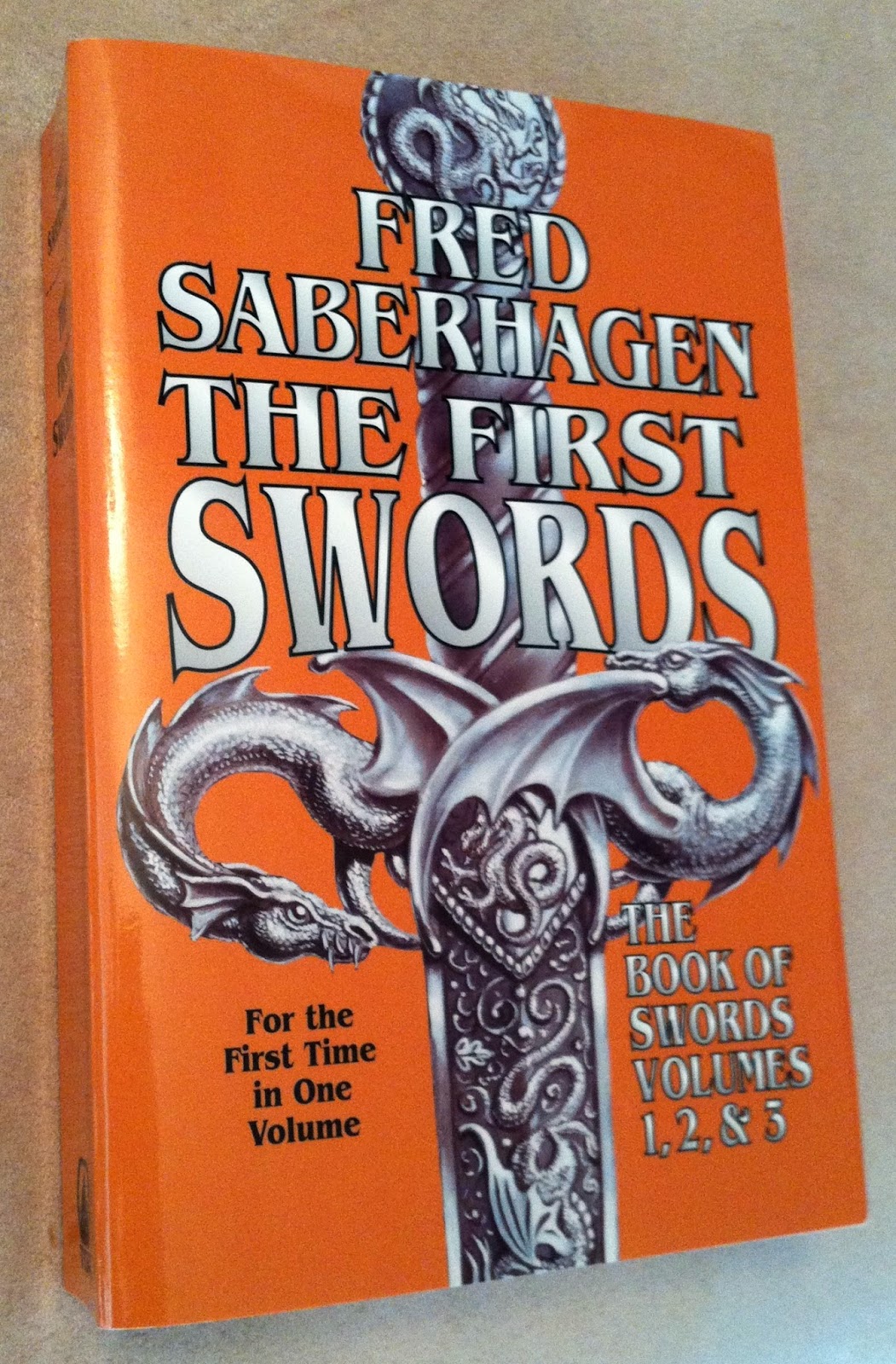 Twelve magical swords, forged by Vulcan himself, are the focal point of the series. But this is not the ancient god, Vulcan, that we know. Rather, the Swords tales are set centuries into Earth's future, generations after Saberhagen's sci-fantasy trilogy, Empire of the East.

The gods have returned, and they want to play a game. What the game is and what they might win or lose is never made clear. That is intentional. The gods themselves don't entirely understand their own nature. That is just one intriguing mystery of the trilogy. The Swords are dispersed among men. Struggles and battles ensue as both men and gods attempt to acquire the Swords and harness their powers - for good and evil.

The first tale's hero is named Mark. (I get a kick out of Saberhagen's use of such commonplace names in a fantasy setting.) Under magic compulsion, Mark's own father, Jord, helped Vulcan to forge the swords. Jord also sacrificed an arm in the process. Mark's lineage is somewhat uncertain and he seems to have a connection to the swords, but he doesn't fully understand that connection. Forced to flee home, Mark becomes entangled in swords, princes, seers, dragons and villains. He makes fast friends among a group of dragon hunters, two of whom, Ben and Barbara, become the major secondary characters in the trilogy.

The second novel is almost a classic dungeon crawl, as Ben and Mark join with a group of treasure looters. Everyone wants to get rich, but Mark also wants to secure Swords for his liege's cause. Their choice of raid is fraught with peril. The Blue Temple see the worship of money as a religion, and they don't look kindly upon thieves.

I really enjoyed the third book. It had an intriguing opening, and lots of variety to the plot. Very unexpected things happened. The Blue Temple return for revenge, the gods become much more directly involved in the struggles of men. A new villain, the Dark King, is wonderfully creepy.

The first strong point of this trilogy is its variety. Saberhagen keeps changing things up. Each book does not follow immediately in the world. Four years or so pass between each book, and things happen between the tales, that shift settings, balance of power, and even how and where the characters are and where they have been.

I was surprised that the story was not wrapped up neatly. At the end, some gods have died, some have disappeared, two Swords have been destroyed, and the fate of the main human characters in their last ditch battle is unknown.

I know the Swords tales continue for the eight novels of the Lost Swords series. I guess I thought the Lost Swords might take place between the lines of this first trilogy, but it appears that is not the case. The world goes on, the gods go on, characters, gods and swords come and go.

I look forward to reading some of the other titles, just to see what Saberhagen threw into the mix with each story.
Posted by Paul R. McNamee at 7:00 PM 4 comments:

No, not binging on the reading, but the buying. I found an eBay dealer with a bunch of overstock books. As though you were in the bargain section of B&N. But, he offers many paperbacks and many fiction titles that appeal to my interests. Combined for cheap shipping, these are new, though shelf-worn in very minor detail. In most cases, I also bought them cheaper than their ebook versions.

My second order came in today; 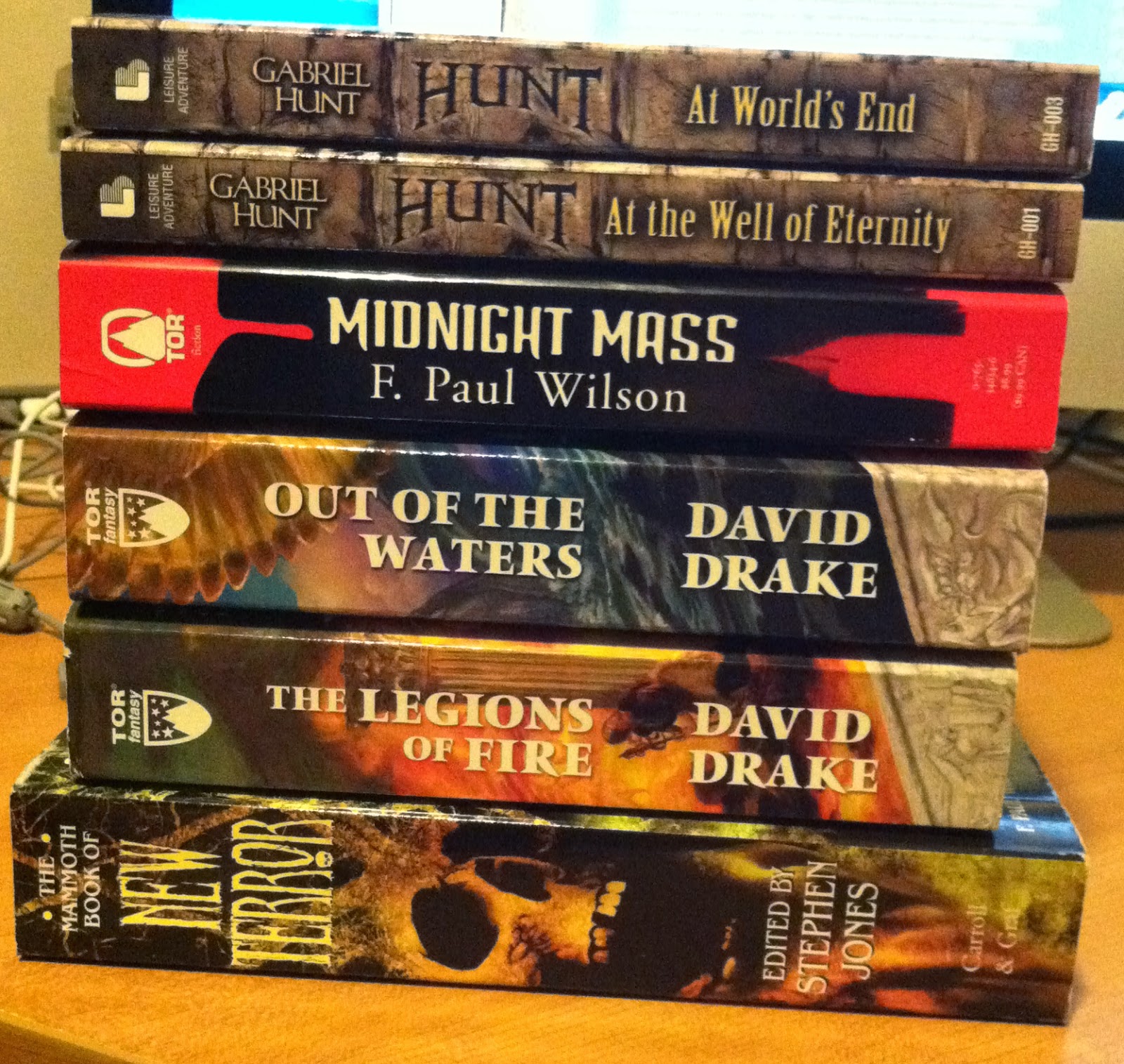 I've been stocking up on the Mammoth Books of.

I've wanted to read Midnight Mass for a very long time. I assume it is a rewrite of Wilson's short story "Midnight Mass." A story set where vampires have overrun our world.

The two Drake titles are from his newest TOR fantasy series. Unlike his Isles series, this one is supposed to close out at book number four, and was planned that way from the start. (One per classic element, I guess.) I did enjoy the Isles series though it had (intentionally) repetitive plotting.  I will be interested to see how this series unfolds.

I've been curious about the Gabriel Hunt books. It starts with At the Well of Eternity, I believe. There was a mistake in the eBay listing, the second one shown here was listed as being written by David Schow, but Schow wrote a different one. Ah well, I'm still glad I got them as they appear to have already been revamped with new, less interesting cover art.
Posted by Paul R. McNamee at 9:39 PM 3 comments: 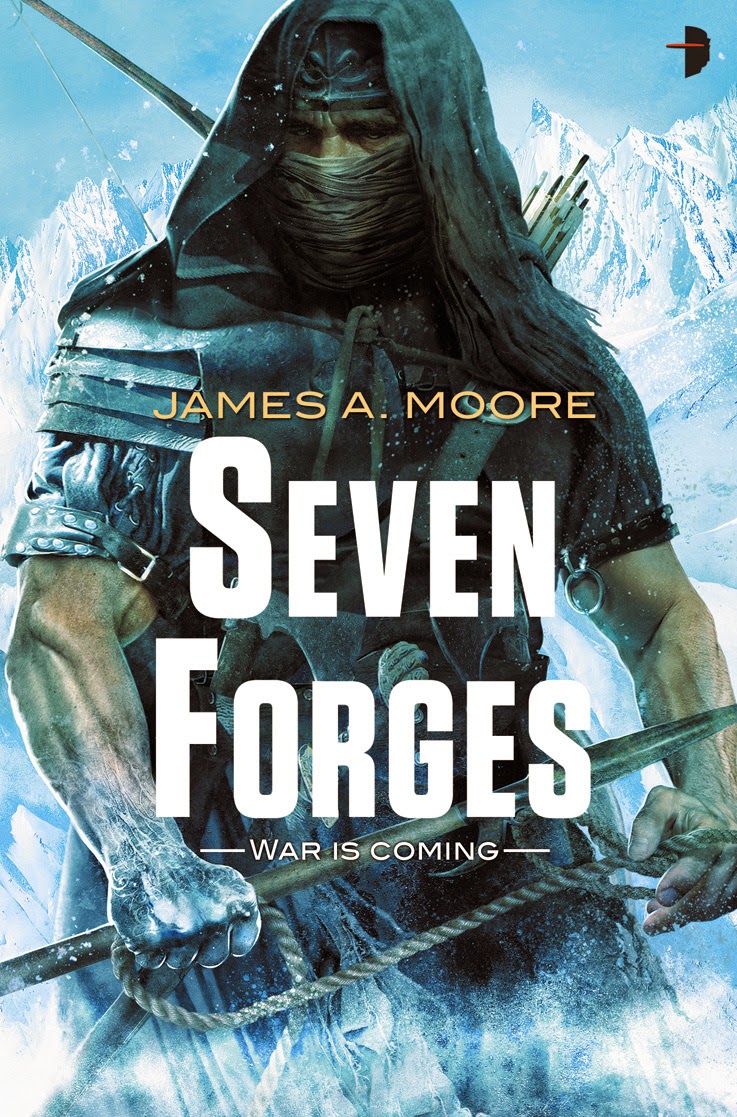 Seven Forges is the opening novel salvo of what promises to be a large, rollicking dark fantasy series from James A. Moore. Moore has experience as a horror writer and this is his first published fantasy work.

In the novel's opening, we are introduced to Merros Dulver, a mercenary and former soldier who has undertaken a commission to explore the Blasted Lands - a scary wasteland north of the Fellein Empire. His mission comes at the behest of not only his emperor, but also his emperor's sorcerer/advisor. Things get complicated when Dulver makes contact with an unknown/lost race, the Sa'la Taalor; and they know him by name. Uncomfortably thrust into role of semi-ambassador, Dulver is soon embroiled in politics and cultural honor. The Sa'la Taalor are large, scary and the most efficient, violent warriors Dulver (or any Fellein citizen) have ever encountered. To have them as enemies instead of allies would spell certain destruction for the Fellein Empire.

The book spreads its vines and roots as Moore brings various characters into play, and sets up many questions - some which are teasingly not answered in this opening volume.  While there is a bit of lack of martial action in the second act, the story does move forward as Moore explores and explains various cultures and characters. It is groundwork laying for the entire series, and I didn't really mind it because it was not presented as info dump. Moore kept me interested with exploring the world he has created.

The third act kicked everything up a notch, establishing some riveting suspense and by the novel's end, we are left with some large, breathtaking cliffhangers - including the opening of war.

I really enjoyed this novel. Moore deftly arranges all his story elements to keep the reader engaged straight through the tale. The cliffhangers work - I am eager to start reading the sequel, The Blasted Lands, shortly.
Posted by Paul R. McNamee at 10:00 AM 2 comments: