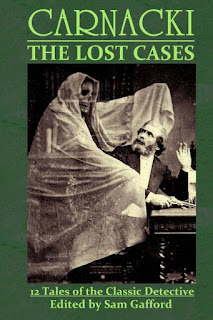 This anthology is now available. I'm excited to be in this one. Instead of inventing new tales from scratch, editor Sam Gafford asked us to use pre-existing titles of  'cases/adventures' specifically mentioned by Carnacki in the original stories while he was investigating other cases.These are tales William Hope Hodgson - creator of Carnacki - himself never got around to writing.

It was a good challenge to write within the framework of Carnacki's world and the given title.

Here is the announced table-of-contents;

THE DARKNESS by A. F. KIDD
THE SILENT GARDEN by JASON C. ECKHARDT 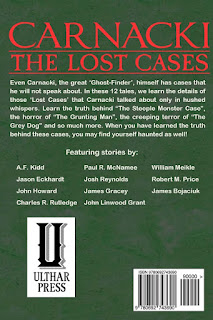 A few weekends ago we spent the weekend in western Massachusetts - "western" being the Pioneer Valley of the Connecticut River, not quite so west as the Berkshire mountains.

I took a very brief stop in historic Deerfield and got the bug to read about the raid of 1704. During Queen Anne's War, one cold winter morning, a combined force of native forces and French soldiers attacked the English settlement, carrying off over one hundred prisoners and marching them to Canada (New France.)

The gift/bookshop didn't have any very short reads about the raid. I forewent any thick history books and tried to go to a source - the narrative of John Williams - minister of Deerfield who was taken in the raid and spent three years in Canada until he was finally "redeemed" (prisoner exchange/ransomed) back to Boston.

I grabbed the Kindle edition. As it turns out, Williams's own narrative is hard to come by. The common edition available is a book written by one of his descendants decades after (1833.) The descendant gives highlights and excerpts from the original narrative.

Not having the original, I don't know how it was presented. But this later rehash is concerned with the details of the raid and the march to Canada for only about 20% of the volume. The other 80% describes all of Williams's hardships while living among the heathens (Indians) and idolaters (the French Catholics.)

What you get is much more The Temptation of Williams in the wilderness instead of Last of the Mohicans. He is tortured, beaten, roughly handled, debated by Jesuits on all sides. But he refuses to convert to evil Popery. I don't know if the original narrative has such an imbalance. But given that Williams was a Protestant (Anglican) minister, and so was his descendant, this is the track the book takes.

One thing I did find revealing was the French alliances with the Natives. It is clear - between the lines - that the French were in no way all-powerful in matters with their native allies. They were outnumbered and cautious. There are constant references to various French agents negotiating on Williams behalf - both with Natives and Jesuits priests who worked among the natives. The French could not simply order the Natives to comply.

Interesting read for a while but by the end I was skimming large portions.

p.s.- While searching for a cover image, I came across this nice, short article about the place of the execution of Williams's wife, Eunice. Great photographs.

The Ghost of Eunice Williams 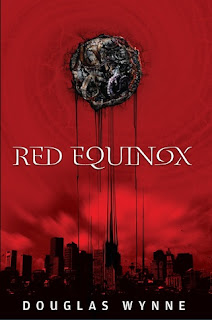 When some people ask or wonder if Lovecraftian fiction is played out and is not applicable to modern times, we now have an excellent example of where an author can take the genre.

Becca Philips is an adventurous photographer who explores urban decay of Boston when she is not combating her seasonal depression. One day, strange images appear through the lens of her camera. Soon, she is the epicenter of a coming apocalypse, hunted by both Starry Wisdom cultists and a government shadow police, SPECTRA. And, her own family ties back to Arkham might have far more to do with her involvement than she ever realized.

Douglas Wynne's Red Equinox is firmly set in the now, with well-done moments of updating the tropes - and here in this story they are the tropes, not the cliches. Wynne understands the alien blend of sorcery and technology at the heart of the horror in Lovecraft and does wonderful, twisted things with it. Wynne also hits many touchstones of Lovecraftian fiction. These "Easter eggs" should bring a grin to any Lovecraft Mythos fan as you come across them in the novel.


Wynne does well presenting real modern characters. Photographers, artists. Agent Brooks - a "cop" with a gambling problem - is the secondary major protagonist of the story and I enjoyed his character.

This story also drips with Boston locations which give the tale a strong veracity. Maybe if you're from out-of-town it might not work as well - or maybe, hopefully, it gives you a real feel for the city, further anchoring the novel along with its characters.

Red Equinox is a solid Lovecraftian novel for the early 21st century. If you are on the hunt for such a read, give this one a look.
Posted by Paul R. McNamee at 11:45 AM 1 comment:

In addition to cramming guest-of-honor reads in time for NECON this July, I'm also trying to read stuff by people attending - not just the headliners.

This one caught my eye for a song at the used book store a few months ago. 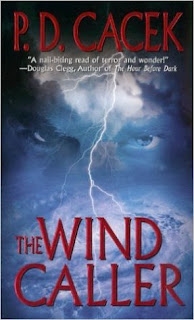 There is much conflict in the air of Richland, Arizona — the longstanding conflict between the "white" and the "red," the very modern conflict between landowners and a real estate developer, and even a conflict of trust between Native American schoolteacher Sky Berlander and her lover, Sam. But these all pale in comparison to what brews between Sky and her estranged grandfathers, as a feud which has divided their family will finally come to a head over an ancient and terrifying birthright — the power to control the wind itself.

I really enjoyed this one. I think it is my favorite NECON prep read for this year so far. The little blurb really tells it all. Gideon is a nasty, cantankerous old man who controls the wind for his own selfish means - hunting and worse. When his land is encroached, the winds blow harder. Arrayed against him are his granddaughter, and old Joseph - a good man who should have control over the wind but was too afraid of the power and responsibility.

This one delivers. It was a fast read, wind demons and folklore and solid characters pulled me right in. Maybe I'm partial to it because I've been keen on Ithaqua/Wendigo tales. Must have been all that windy weather we had the past half-year.

The Wind Caller is available as a ebook, too.
Posted by Paul R. McNamee at 9:40 PM 3 comments: