I attended the WRITE BETTER FICTION workshop last November, as you might recall.

For the first half of 2017, they are offering the workshop again. They have added three seminars, too. One deals with the business side of publishing. The other covers writing for comics. And, building your novel from the ground up. I will be attending the WRITING FOR COMICS seminar. At some point, I will also attend BUSINESS OF PUBLISHING but I'll need to catch the next one.

If you're in the area, give this consideration. If not, perhaps they'll be able to expand to webinars in the near future. 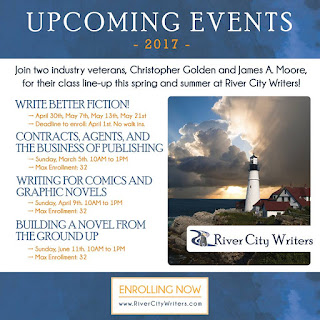 recent read; Planet of the Apes: Tales From The Forbidden Zone

Planet of the Apes: Tales From The Forbidden Zone

This is the book apocalyptic apes dream of.

It's hard to be unbiased about this book because I am an ApeHead since childhood. Anything new in the Planet of the Apes realm is like a nostalgia life preserver. I discussed that recently.

Tales from the Forbidden Zone gives us sixteen tales set across the various Planet of the Apes classic universes. Meaning - the original five movies, television series and Saturday morning cartoon. It does not include the 2001 movie or the recent movies.

The stories are enjoyable. I preferred some more than others but that is the nature of anthologies. Rather than delineate all sixteen, I will mention a few of my favorites. Your mileage may vary.

"Unfired" by Dan Abnett starts off the book with a bang, focusing on a group of underground mutants (Beneath the Planet of the Apes) making a daring pilgrimage across the open wilderness.

"The Unknown Ape" by Andrew E.C. Gaska starts in the cartoon universe (Return to the Planet of the Apes,) but we soon learn that Planet of the Apes time travel also creates the ability to cross dimensions into the other Apes realities. This is a fun crossover.

"Message in a Bottle" by Dayton Ward is an intriguing story in the television series setting. It almost serves as the first step in a 'season two' arc, bringing the astronauts' story back to its science fiction roots and away from "The Fugitive with Apes" rut the show quickly fell into. As a fan who wished for exactly that in regards to the show, this story really stood out.

"Milo's Tale" by Ty Templeton explains how Cornelius and Zira met Milo and came to be on the spaceship (Escape from the Planet of the Apes.) It also delivers a convincing backstory for Milo, explaining how he was such a knowledgeable ape given the primitiveness of the society presented in the original Planet of the Apes.

Finally, Jonathan Maberry closes out the tome with "Banana Republic," exploring the political machinations and alliances of ape society, coupled with the discovery of an ancient place of evil.

Tales from the Forbidden Zone is a welcome addition to the Planet of the Apes universe. If you enjoy that universe, you'll enjoy this book. Perhaps if it performs well, there could be another volume. So, buy yours today and go ape!
Posted by Paul R. McNamee at 11:30 AM 2 comments: 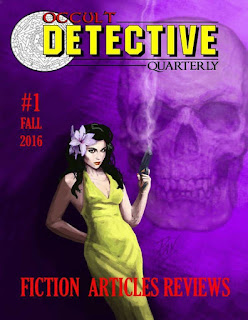 OCCULT DETECTIVE QUARTERLY #1 delivers on its premise and promise of .. well .. occult detectives. If you don't know what classifies an "occult detective" - they're those heroes of fiction who investigate, expose and battle the occult - whether that be ghosts or monsters, other strange happenings, strange people, stranger creatures and things beyond the ken of men. Think Carnacki, Kolchak, and a host of others.

This debut issue has a wonderful mix of haunts and fun and whimsy. How about a tough guy PI who is a talking gorilla? A vengeful ghost? Men who walk in other dimensions and faerie realms? (And, don't think we're talking about cute faeries - we mean the dark fey of old times.) Voodoo and black dogs. You will find all that and more in these pages.

Plus reviews, a history of comic occult detective Dr. Spektor, and an interview with Spektor's creator, Donald Glut.

I enjoyed all the material and strongly recommend grabbing a copy if you enjoy the wide range of the occult detective milieu.
Posted by Paul R. McNamee at 10:45 AM 2 comments:

The world has gone ape. Yes, in more ways than one. I'll stick with the non-political one.

In hindsight, my first fandom was PLANET OF THE APES. I was an ApeHead.

What also surprised me, in hindsight, is how much of the fandom marketing machine I missed. It's also a bit of a shock to remember how much merchandise was available. It really was the first franchise merchandise blitz out of Hollywood. Sure other movies and shows had toys and a few coloring books, but POTA really went ape.

But I never knew about the novelizations. I spotted one in the library during junior-high years later. I never knew a thing about the comics, either, surprisingly enough.

Now, Titan Books are allowing me to relive my childhood and then some. 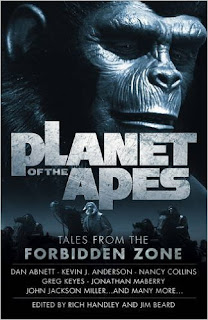 Two omnibuses collecting the original movie novelizations are coming, too. 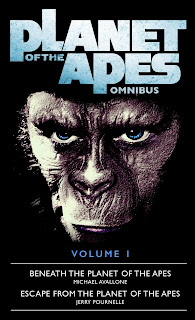 Wait. Not done. They are also publishing an omnibus of the original television episode novelizations. 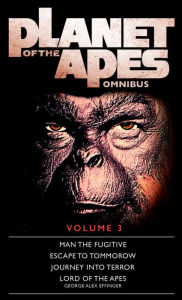 Nope. Still not done. Not yet available but listed in Tales from the Forbidden Zone (and personally confirmed for me) a fourth omnibus with the original novelizations of the cartoon series.

Also rumored - perhaps a collection of the comics. 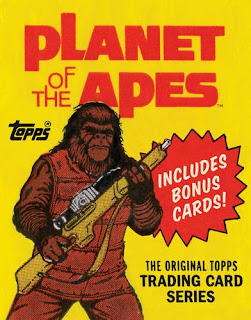 I knew the t.v. cards, I had those. I didn't know there had been cards from the original movie, too.

Last night, I picked up the new #1 of the PLANET OF THE APES / GREEN LANTERN cross-over comic. 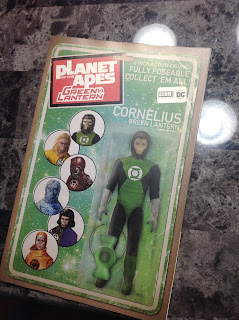 Yeah. Combining the Apes with Green Lantern with the old Mego action figures packaging for the artwork.

If nothing else, it will be a great year to be an ApeHead! 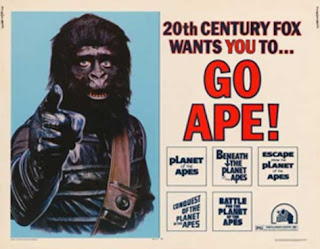