As DC meanders in the live-action realm while Marvel takes off into the stratosphere, quite the opposite continues to occur in the direct-to-Media animated movies arena.  Justice League: The Flashpoint Paradox is another homerun for DC. (Unlike my disappointment with Iron Man: Rise of the Technovore.)

Barry Allen, a.k.a. the Flash, awakens from a desk nap to find the world has completely changed, and most of it not for the better.  His superpower speed is gone, some other heroes don't exist, and those that do are not the same that Allen knew.  The world is on the brink of annihilation as the fabled nations of Atlantis and the Amazons wage all-out war against each other - regardless of human casualties caught in the crossfire.  Can Barry Allen regain his speed and time-travel ability in time to change the alternate timeline before it is too late to save the world?

Like some mythic tale of old, Atlantis and Themyscira are at war over assassinations and lovers' betrayals.  Aquaman and the Atlanteans have already struck a major blow, driving the Amazons from their native island.  This leads to the Amazons conquering England and declaring it New Themyscira.  And now Aquaman threatens to use an ultimate weapon.

Justice League: The Flashpoint Paradox doesn't so much reverse the DC Universe as much as it skews it arse over elbows.  This is not a simple "good guys are bad guys / bad guys are good guys" alternate universe story.  There are a few surprises in that vein, and that's all I'll say to avoid spoilers. 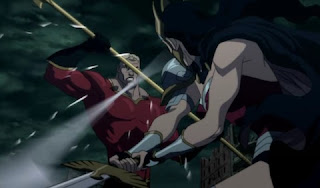 DC are not joking about the PG-13 rating this time around.  There is blood and disturbing violence.  Wonder Woman is a stone cold killer.  (In fact, a friend of mine who received an early review copy texted me immediately and warned me not to show my kids [It's okay, I don't let my kids watch these PG-13 DC movies.])  Older kids might be okay but if you have any very young ladies who admire Wonder Woman's heroics, this is probably not the time to introduce the concept of an alternate reality with a murderous Wonder Woman.

Post vacation blues - but, not really.  I had a great week off.  For the first time in a long time, the vacation felt longer than it actually was.  I'm not sure why.  Maybe because we did lots of different things rather than one.

We spent a few days at York Beach, Maine.  Specifically, the Short Sands beach - which is smaller and very rocky.  But, the kids did not care.  They were happy to dig holes, collect mountains of rocks, and jump in the waves. 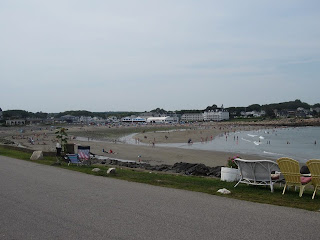 Aside from that, it was just days at home.  I did some personal shopping, scored some nice goodies.  This past weekend was wonderfully full of serendipity.  Spur of the moment, we had lunch with my parents on Saturday.  My sister and most of her family spontaneously stopped by my parents' house while we were there.  (They were also on their way home from a different Maine locale.)  Sunday night, we decided on dinner at a local establishment and bumped into our friends there.  They live in town, but we haven't seen each other in person in a very long time.  It was really great.

I even had some sense of accomplishment as I started cleaning out the home office yesterday in anticipation of a redo of the room.  We thought about hiring someone to build-in bookcases, etc., but we've decided to take our time.  I'll order a few custom pieces at a time (e.g.; storage cabinet, custom-sized bookcase) and work a wall at a time myself.  That'll spread the cost over some months.

I did not get much reading done.  Well, I didn't get much reading done on The Twelve Children of Paris.  It is a large enough physical book that I didn't want to lug it on vacation.  I brought my Kindle instead, and read a handful of tie-in Doctor Who short stories that have been released this year to coincide with the 50th anniversary of the show.  So far my favorite was the Second Doctor story, which featured The Necronomicon.

Iron Man: Rise of the Technovore 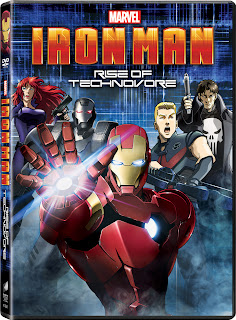 This is not at all what I was expecting.  I guess I should have read a little more about it before I made the impulse buy when I saw the disc at the store.  I knew we were in for something different when I popped the disc in...and the default language was Japanese with English subtitling.

This movie spun out from the Japanese anime series of Iron Man.  There is some anime I enjoy a lot, but much of it doesn't appeal to me.  I did watch the initial anime episode of Iron Man (on G4, I think) and it entirely failed to capture my attention.

The movie starts out promising enough with a lot of aerial goodness as Iron Man and War Machine zip through canyons racing each other.  The initial attack of the Technovore is creepy and disturbing, and though it does devolve into bigger and bigger explosions, the artwork of the devastation and blazing fires is impressive.

But soon, the tropes kick in and the plot holes loom large.  The action just stops for still pauses and brooding, both among the villain and the good guys.  When the action picks up, it is in the form of S.H.I.E.L.D. running Iron Man to ground with orders to use lethal force because they want to protect Iron Man as the only witness to the initial attack.  Yeah, it makes that much sense.  (Maybe they had bad translators.  When I initially switched the language to English with English subtitles [before I turned off the subtitles] they were not equivalent.)

I didn't like the Technovore, at all.  He is a petulant boy with biotech armor whose sister/girlfriend (they never said) reads him Nietzsche while he stares at himself in a pool in a sterile white room. 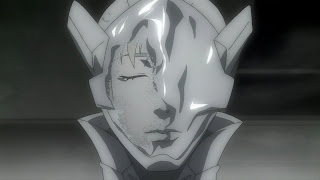 Compare that with the bug-like version of the Technovore I was first exposed to via The Avengers: Earth's Mightiest Heroes (which, btw, is a very enjoyable series.) 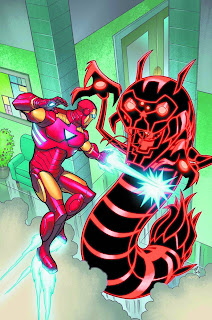 I prefer the big techno-bug, myself.

Besides dead air brooding moments and still frames, another anime aspect I can do without is the fuzzy/cloudy lens.  I prefer sharp animation, and if muted, okay, but you don't need to further obscure the visuals and make me wonder if I need to clean my glasses again. 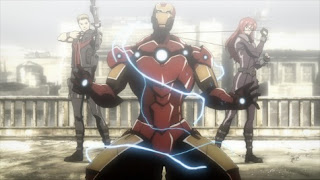 Another annoyance, outside of the movie itself, is the disc.  We were forced to sit through all the previews - bailing to the menu was not an option.  I hate it when discs do that.  It makes the likelihood of me putting it in the machine and watching it again even less.

So, if you like the tropes of anime and enjoy Marvel heroes, you might like this one.  If you're looking for a straight-ahead style of animated action, you're not going to find it here.
Posted by Paul R. McNamee at 12:30 PM 2 comments: 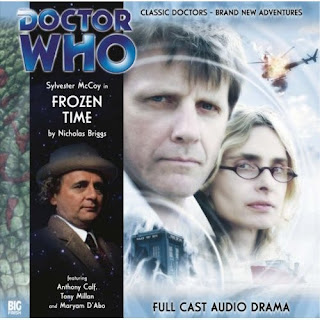 Plot:  In the early 21st century, Lord Barset mounts an Antarctic expedition to find the remains of his grandfather's 1929 lost expedition.  But Barset's motivation is not purely genealogical.  Barest believes there is a pre-human reptilian civilization buried under the ice.  He is half-right.  The Doctor knows better, but after a million-year coma, his memory is fragmented and he might not recall what they need to know in time to save themselves and the planet.

The Ice Warriors.  They sound right, and they have layers to their society - they aren't just an entire race of baddies and this story remembers to highlight that.

(Originally when this was released, the Ice Warriors' appearance was kept secret - that would have been a strong point, too, but by this time most everyone knows they are in this adventure.)

Weak points:  The setup fails to suspend disbelief.  I'm not sure even the Doctor could have survived frozen for a million years, Time Lord induced coma or not.  Would the Doctor really aid a prison facility - even one for his foes?  Would the Doctor agree to a Martian prison for the most dangerous criminals existing in Antarctica on Earth (of the past,) knowing what will happen in the future of that planet?

Frozen Time is a good Doctor Who story if you go along for the ride and don't think too much about how it all came together to start the adventure.
Posted by Paul R. McNamee at 9:45 AM No comments:

At one of my area comic shops this weekend, I noticed they had a cache of original Weird Tales by the register. I hadn't seen them there before, and as soon as the shop owner noticed I was buying Boom Studios' graphic novel of Hawks of Outremer, he pointed them out to me. (Of course, I had already thumbed through them!)

They had some with Robert E. Howard content and some with H. P. Lovecraft though I don't remember exactly what.

So tempting. But at $90~100 per issue I couldn't personally justify a purchase.

Two of the issues they had; 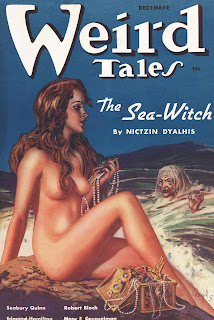 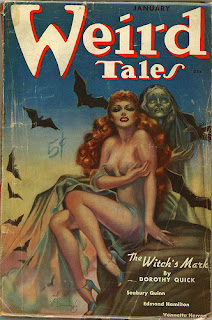 "The Sea-Witch" by Nictzin Dyalhis wound up in Echoes of Valor III thanks to Karl Edward Wagner.
Posted by Paul R. McNamee at 11:30 AM 2 comments: