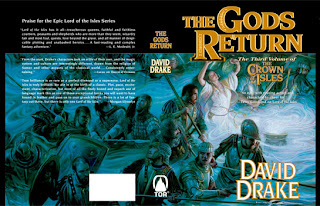 The Gods Return by David Drake

The Gods Return marks the end of Drake's Isles series, and the third act of the closing trilogy of novels.  I've enjoyed the series, and revisiting the main characters every year or so since I started reading it.

The Isles have become a single continent, the land mass upheaved from time & space through sorcery.  This makes for interesting challenges for seafaring city-states that find themselves landlocked.

The old gods - if they ever existed - have fled from the new continent, and malefic gods from other dimensions are ready to invade, aided by marching armies of conquerors who wish to take advantage of the chaos in the wake of the upheaval.

Drake delivers a good novel, with the usual beats that have been happening all along in the series.  The ending surprised me, though it was setup and can be seen in hindsight.  The surprise was a good thing.

I did feel that this novel took a while to get going.  There is a lot of setup before the action gets cooking, but in the end, The Gods Return is a solid wrap to the Isles series.

p.s. - The classical style of the Donato covers on this series have been fantastic.  The Gods Return was no exception, which is why I went for the full wraparound here. 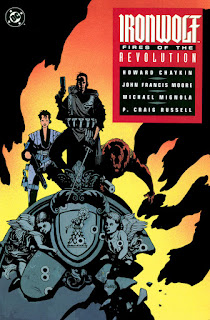 This graphic novel was mentioned on The Swords & Planet League on Facebook. I spotted it at a comic store not long after. Mike Mignola's involvement piqued my interest, so I grabbed it.

The story is more along the lines of steampunk swashbuckler in a space opera setting, rather than sword-&-planet. (to me, anyway. I suppose the genre doesn't really matter – I am just trying to give you an idea of the flavor.)

Ironwolf is a nobleman from a decrepit and decadent empire, ruled by heartless vampires and their drug-addled sycophants. Disgusted by what he sees and experiences, he joins the rebellion, only to be betrayed by allies and family alike. After a multi-year coma, Ironwolf returns for revenge. But, his side lost the war, so navigating the Empire is fraught with peril.

It was entertaining enough for what it is, but I don't know if I'd return to the setting for another story. The Hitman's Guide to Housecleaning by Hallgrimur Helgason

When the e'book edition of this title popped up as the Kindle Daily Deal, the blurb intrigued me;


With some 66 hits under his belt, Tomislav Bokšić, or Toxic, has a flawless record as hitman for the Croatian mafia in New York. That is, until he kills the wrong guy and is forced to flee the States, leaving behind the life he knows and loves. Suddenly, he finds himself on a plane hurtling toward Reykjavik, Iceland, borrowing the identity of an American televangelist named Father Friendly. With no means of escape from this island devoid of gun shops and contract killing, tragicomic hilarity ensues as he is forced to come to terms with his bloody past and reevaluate his future.

I expected something along the lines of a British gangster movie – violence and grim humor. It turns out, this novel is straight ahead black comedy; though it does slip into drama along the way. There isn't a central crime caper like a gangster movie. The story is about Toxic's exile, and being on the lam, surviving day-to-day, eventually making a genuine effort to live straight and narrow.

Helgason has the sharp ability elicit laughter and then just as equally generate horror and sympathy for Toxic in regards to his past of warfare and violence. But the laughs subtly return again a few pages later. It that respect, I felt echoes of Joseph Heller.

A murderous hitman could be difficult to present as a sympathetic hero, but Helgason pulls the reader in. Given Toxic's mad world of the Yugoslav Wars of the 1990s, his violent life as a hitman, and the crazy characters and situations Toxic experiences every day, Helgason manages to make the gun-free, idyllic life of Icelanders seem to be the absurdity.


What is with these Icelanders? No army. No guns. No nothing. Only gorgeous women driving luxury jeeps...

I really enjoyed this novel. It's dark and twisted, but it was such a change of pace, I couldn't help smiling most of the way through.
Posted by Paul R. McNamee at 7:00 PM 2 comments:

Planet of the Apes (television series) 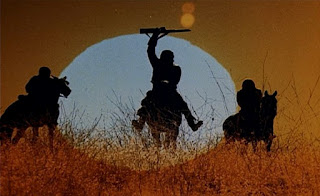 Maybe this is coming from rosy-lensed glasses of my youth and long being an Ape-Head. But, I re-watched the first episode of the 1970s Planet of the Apes television series last night, and thought it was very strong. Some very suspenseful moments, a good setup. Very good classic scifi with hints of a much larger backstory.

Alas, the ratings failed early. Attracting only younger viewers, suit execs ordered the show dumbed down for kids. Ape menace and scifi threads were dropped in favor of action where buffoonish gorillas were constantly being whacked over the head with logs. As one actor noted, it became The Fugitive with apes. Who gets captured and who escapes this week?

The tactic didn't work, anyway, and the show continued to dwindle.

Too bad they didn't even get the old standard 24 episode season, and only managed 14 episodes. It would have been great if they could have explored more lost technology and possible mysteries of the gaps between their time and the future of the Apes.
Posted by Paul R. McNamee at 7:45 PM 8 comments: