The Dunfield Terror by William Meikle

In this short novel, a deadly interdimensional fog bank attacks an isolated Newfoundland town at the height of a disastrous blizzard. This book is a quick read with nifty backstory simultaneously explored as the "now" story rages on. There are even flashbacks to the 1800s, establishing that the phenomena genesis in the 1950s caused a rift in time, too.

The only negative was some repetitive incidental action - drink coffee, drink rum, smoke a cigarette. Then again, at the height of a Newfie blizzard, what else can you do?

I am trying to explore genres and read some tales from NECON attendees before this July's next con. Bracken MacLeod and Chris Irvin both had crime novellas out last year.

Tight, quick read that hits hard and fast. An idealistic prosecutor tries to help outside the boundaries and gets caught in a noir-ish trap. Things only get worse and darker from there.

I like that MacLeod's stage was quick and small, befitting the story and novella length. The tale happens quickly, over a few days, and the setting is a smaller city of Massachusetts. When we say "Lynn, Lynn, city of sin," we aren't kidding. It works far better than trying to stage this noir-ish tale in New York City or Los Angeles. It works.

In Mexico, law enforcement comes in shades of grey, never black & white. An idealistic Federale, Marcos Camarena, finally gives in under pressure (and threat to his life) and leaves law enforcement. He can't keep from trying to help, though. He is hired as a bodyguard to an anti-drug crusader who has already had brushes with death and assassination attempts.

On the plus side, this tale has very evocative characters and tone. I felt the heat, the sweat, the hopelessness. On the negative side, the narrative sputtered and gave out at the end, I thought. It felt like a setup for a longer work, a shift into the second act, but then it hurriedly ended.

Rather bleak stuff, but the war on drugs is a bleak subject, especially over the border in Mexico.
Posted by Paul R. McNamee at 4:15 PM 2 comments:

I've been doing research on the Maori wars of the mid-1800s. These were the battles fought between Maori New Zealand natives and the British colonizing forces. It all sounds far too familiar - forcing people off their lands to appease settlers, miners and other greedy people. Maori fought Maori, too, as some tribes considered allying with the British as their best option.

Thanks to Jim Cornelius' review of River Queen, I thought it would be a good way to get some feel for the era.

You should read Jim's review, it's short and to the point. 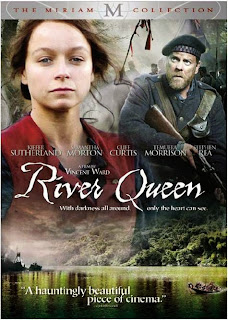 As with many such movies, it is not about the war specifically, but about the people caught in the middle. But there are combat and battle scenes, and those alone are worth a viewing if you are a military history buff and you don't know much about these conflicts.

My take away; it had great visuals, and excellent battle scenes. It especially highlights the rugged NZ forests that made the fighting a hard slog.

On the other hand, the main narrative was all over the place and got worse near the end of the movie. It felt like scenes were strung one after another without a polish to pull them all together. I felt like some scenes were almost out of order, and quickly reworked to fit the new order. More and more characters started vying for the story's attention, too.

There was too much use of voice over. Never a good sign. On top of that, the sound was muddy. I finally turned on captions, though I am usually all right discerning accented dialog.

River Queen is a decent historical drama with some nice visuals and battles, but it's a bit of a jumble. It's one of those movies I wish I could like a bit more than I did.
Posted by Paul R. McNamee at 1:45 PM 1 comment:

Growing up, more than once my mother mentioned the classic movie, Northwest Passage. At some point I finally did see it via broadcast television. I had it on VHS tape at one point. It was one of the movies I waited forever to come to DVD. It was finally released via the Warner Archive. The Archive features no-frills transfers of older, less-than-big-hits. The films aren't cleaned up, feature no or very little bonus material.

The movie follows the exploits of Rogers' Rangers during the French & Indian War. Specifically, it focuses on the Saint Francis Raid - an expedition deep into hostile French and Abenaki territory to destroy a base of operations the Abenakis used for raids deep into English colonial territory. 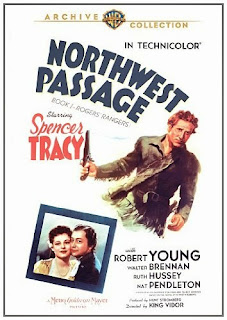 I finally sat down and gave it a re-watch this week.

As with many things through rosy glasses, it's not nearly as good the second time around.

Not surprisingly for 1940s Hollywood, the "Indian" portrayals are weak. The first indian we meet is drunk. The Abenaki village Roberts' Rangers assault and destroy just happens to be overpopulated by males. There is a token appearance of kids & women to be spared. And, if they don't look Mohawk, then they look Apache. There is much told of "innocent" settler folks being butchered by Natives, and nothing said of things from the Natives' viewpoint.

Speaking of the Abenaki village, that's the only combat action in the entire movie. The rest of the action centers around the Rangers arduous journey to make the attack in surprise. Boats hauled over hills, swamps, rain, creating a human chain across a fast running river, discord among the troops and their Native allies.

The screenplay was adapted from a 1930s popular novel by Kenneth Roberts. It's out-of-print, and I'm surprised it hasn't been given the ebook treatment. Part of me still wants to read it. But if the movie followed it closely, it might not be my cup of tea. It does appear to have had a longer story than the movie, going beyond the Saint Francis Raid.

If you like old Hollywood frontier movies, you should probably watch this one at least once. I don't know about repeated viewings, though.

Historical note; while Rogers and his Rangers were heroes of the French & Indian War, in the end, Rogers washed out and sold out.
Posted by Paul R. McNamee at 2:00 PM 1 comment:

On my bucket list, and on my Dad's bucket list, unfortunately, was to get my mother's father's (my maternal grandfather) World War I paraphernalia into a display case. We finally did so this weekend. 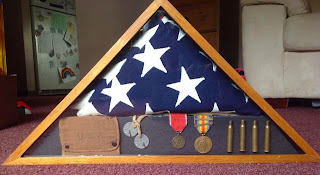 His flag was undersized, but that worked out perfectly. My wife put together a shadow box that fitted into the bottom of the case. (For the record, he didn't die in the war, he died in 1943.) Under the flag we have a doughboy sewing kit, his dog-tags, a French Verdun medal (see Unofficial medals, on the linked page) American World War I Victory medal with three battle clasps, and rifle bullet shells.

This case now stands on our fireplace mantle, but the glare from the light didn't make for a good photo. Hence, the floor shot.

One other item did not fit into the case. A rather unique crucifix. 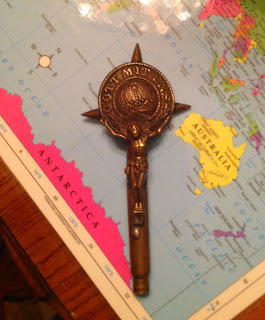 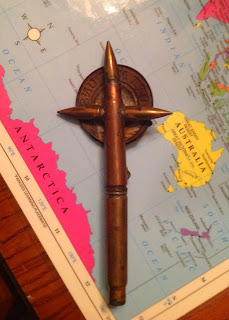 As a side story, my six-year old daughter recognizes Jesus and crucifixes. She wanted to know why Jesus was on 'that' (the cross of bullets.) I was a bit on the spot. The best I came out with was, "The problem with war is that sometimes both sides think God is with them. But it's a just a terrible thing." Or something to that effect.
Posted by Paul R. McNamee at 10:17 PM 5 comments: