The middle class expanded, GIs earned college degrees, the suburbs sprawled. Rock’n’roll and television arrived, and Hollywood continued to entertain America. But underneath the idyllic facade, there were dangers. The Cold War, atomic annihilation, red communists infiltrating the West and war in Korea.

But what of Cthulhu and sundry Mythos gods? Did they sleep through the boom years? Or were they and their disciples and their enemies actively at work furthering their unfathomable objectives?

Some of these nineteen stories play with our history. Some offer alternate worlds where history is slightly different. The entire set of stories offer a wide range of tones, ideas and Mythos elements - some are humorous, others horrific, some have a spirit of adventure and others drip with paranoia. The humans, of course, are sometimes the worst monsters of all.


Atomic-Age Cthulhu is a very solid anthology that delivers on its premise. Highly recommended for a different slant on the Cthulhu Mythos.

(Perforce, this review is condensed. I wrote a much fuller review for periodical that will be coming in the near future. I will let you know when that becomes available.)
Posted by Paul R. McNamee at 9:16 PM 1 comment: 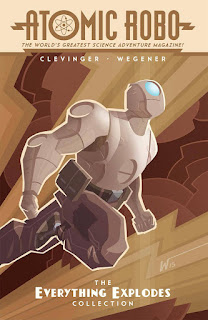 Out of the blue, Clevenger & Wegna were contacted by IDW Publishing to keep Atomic Robo in print. IDW have been putting out the latest story arc (in parallel with the web comic,) and they have put out an omnibus of the first three volumes, Atomic Robo: The Everything Explodes Collection.

The second omnibus is already listed at Amazon, too, Atomic Robo: The Crystals Are Integral Collection.

Clevenger guested on a Comics Alternative podcast. It's long, but very insightful. I loved his observation that in a way, Atomic Robo is the Bugs Bunny of his universe. But Dr. Dinosaur is Cecil the Turtle - the only character who ever disrupted Bugs Bunny's winning streak.

Again, I can't recommend this comic enough. It's written for adults, but it is all ages appropriate and tons of fun for everyone.

The Real Science Adventures continue!
Posted by Paul R. McNamee at 10:14 AM 1 comment:

Time for a retro review! 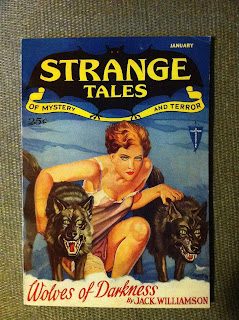 I've picked up a few Girasol pulp replicas in the past year. This Strange Tales Jan 1932 issue jumped out at me both for its cover and for the authors listed in the contents. It's October, so I decided to read the entire content rather than cherry pick this one.

"Dead Legs" by Edmond Hamilton
Thugs meet mad surgeon story. In this case, a crippled mob boss forces a brilliant doctor to graft new legs onto his body. The legs are those of the mob boss's murdered rival. The cursed legs try to get the mob boss killed. Entertaining but a bit of a stretch and certainly not classic.

"Wolves of Darkness" by Jack Williamson
Classic horror novella that turns the werewolf story on its ear. What starts out in the usual fashion - a lone man called to a remote destination where strange thing are afoot - soon changes tracks. For, not only do the wolves and people of this story seem preternatural, it is eventually revealed that strange alien life forces - not lyncathropy - are at work.

"The Moon-Dial" by Henry S. Whitehead
This one falls under light fantasy as a young man falls under the spell of the moon. He recalls past lives - all with a connection of scrying scenes under the light of the moon. Robert E. Howard fans might enjoy the passage from a Roman soldier's point-of-view, as they abandon Hadrian's Wall to the amassing Picts.

"The Black Laugh" by William J. Makin
Good horror story set in Boer Africa. A young man woos a woman who teases him into scaling a plateau. But the hapless lover cannot find his way back down. Madness ensues. I swear I've read this one before. I'll need to check some of my anthologies.

"The Shadow on the Sky" by August Derleth
A haunted house and a curse. A non-Lovecraftian story. Nothing wrong but nothing memorable, either.

"The Door To Saturn" by Clark Ashton Smith
A sword-&-sorcery entry involving a blasphemous sorcerer who flees through a portal to Saturn, and his arch rival who gets trapped there with him. Entertaining story and Smith has a great way of imparting cyclopean landscapes. It is a story on the light side, though. No clashing barbarians here.

"The Smell" by Francis Flagg
A ghost story where instead of the ghost being only seen or only heard by one person, a certain odor accompanies the spirit's presence. Again, serviceable albeit not overly memorable.

"The Door of Doom" by Hugh B. Cave
A ruined mansion, a strange Oriental servant, and four daring survivors of World War I who thrill themselves with occult challenges. This one went places I wasn't expecting. I assumed a weird/yellow menace story but it is, in fact, a tale of the supernatural. It reads like a series, yet some main characters die. So, it does a real good job of feinting the reader. This reader, anyway.

All in all,  a strong issue with justifiable classics. I'm glad I grabbed it.

(and who doesn't love all the old advertisements?)
Posted by Paul R. McNamee at 4:26 PM 3 comments:

Seeing as how I am reading various short stories from various anthologies for the month of October, wrap-up lists will make for long gaps between posts.

I thought I'd take a post to enlighten you on an upcoming release. 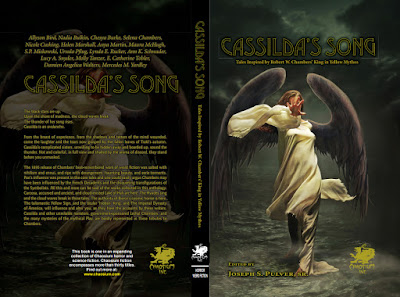 It contains all stories from female authors to give their spin on The King In Yellow motif.

Do I have a special "in" with Chaosium?

They were selling these at Necronomicon Providence. Now, I am glad I bought one, because they have yet to materialize anywhere else. (Which is why I'm not providing a link - I can't. Not now, anyway.)

At the Con, I was impressed with the Robert W. Chambers panel - particularly with Joe Pulver, who is very knowledgeable about Chambers - though there is little to know about the man. Most of his estate and effects were squandered by a wayward son after Chambers' death.

I've also listened to the Lovecraft eZine Talk Show, where Joe is also one of the regular panelists.

Pulver also spoke at length about The King In Yellow being its own entity, - its own 'mythos', if you will - and should not be considered a "meteor orbiting the Cthulhu Mythos." Basically, Derleth and then later Chaosium games rolled the King in Yellow into the Lovecraftian milieu. Like another well-known character of barbarian streak, the King in Yellow had a hard time uncoupling from the pastiches for a while.

Pulver specifically cited Karl Edward Wagner's story, "The River of Night's Dreaming" as one of the first "back to basics" which took only Chambers' original tales as the foundation to build upon.

I figured after that elucidating talk, I'd be all right grabbing an anthology Pulver edited.

I've read his intro and the first tale, and I'll be working more of the stories into my October reads. And I will get to the original four Chambers' King in Yellow stories (yes, there were only four!)
Posted by Paul R. McNamee at 5:23 PM 3 comments: