I'm on a kick to read a lot more new pulp. I'm using Derrick Ferguson's list, 75 New Pulp Books To Get You Started, as a starting point. 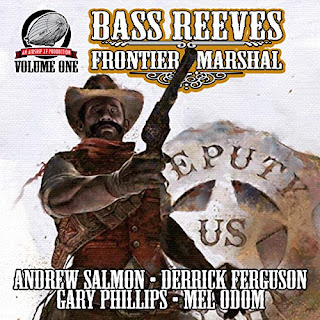 Bass Reeves was a real person. A black man, a former escaped slave who worked the Indian Territories (Oklahoma & Arkansas) as a U.S. deputy marshal. He had an amazing career.

The stories in this volume are fiction, not history. The palate of the Old West and Reeves's exploits serve as a cauldron to mix facts of the man's life with Western tropes to produce enjoyable tales.


"Ride from Three Devils" by Gary Phillips
While chasing the notorious outlaw, Alamosa Bill, Bass Reeves stumbles into a plot to rob a government silver shipment on a west-bound train.

"Whiskey Road" by Mel Odom
Bass must infiltrate a gang of vicious horse thieves to find a kidnapped child.

"No Master But Duty" by Andrew Salmon
Reeves and his posseman collar a wanted man only to have the citizens of the small frontier town he is hiding in refuse to give him up.

"A Town Named Affliction" by Derrick Ferguson
When an old lawman turns outlaw, Bass Reeves and his possemen must hunt down the Chance brothers and bring them to justice.

There is also an introduction from Ron Fortier with suggested histories of Bass Reeves for further historical reading, and each author has an afterword with their story.

I'm not a Western expert. I've read a few. I've seen a fair number of western movies though I still feel like I've only scratched the surface. That said, I thought these stories were solid and entertaining. They were well narrated, too.