recent read; The Mines of Behemoth 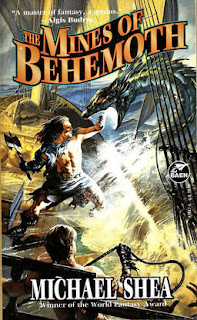 THE MINES OF BEHEMOTH by Michael Shea

This is the second book concerning Nifft the Lean and is a full novel, unlike the first collection of novellas.

Nifft the Lean and Barnar Hammer-Hand are thieves fallen on hard times. They sail to earn money working a "sap mine." This is no ordinary venture - the "sap" comes from draining gigantic grubs - the offspring of even more gargantuan behemoths. These creatures nest in our world and burrow far into the demon sub-world to sustain their ravenous appetites. On their way to the task, Nifft and Barnar are offered a more lucrative enterprise. Despite growing dangers, their work yields more and more opportunities for wealth, which the two thieves cannot resist to exploit.

Shea seemed to love giant monsters. The creatures throughout the Nifft tales are mostly of giant proportions. It's an interesting take for fantasy novels, where - aside from dragons or frost giants - heroes often face things their own size or somewhat larger.

Shea's use of language in these tales borders on purple and flowery but it does convey and bring Nifft's world to life in vivid detail.

The Nifft stories are heroic fantasy but somewhat removed from classic sword-&-sorcery. The combat is negligible, often tossed off in a few words as monstrous limbs are hacked. No hard or long fought duels or grand armies in battle. There is more an exploration of the fantasy world and Nifft's character journey.

Speaking of which, Nifft does get greedy along the arc of this tale. To the point where I was afraid I wouldn't like him at the end. But Shea, thankfully, includes redemption in the conclusion of the story.

I enjoyed Nifft's journey through the behemoth mines. I'll be returning for THE A'RAK in the near future.

(p.s. - Technically, this was a "recent listen" not a "recent read" as THE MINES OF BEHEMOTH is out-of-print but available through Audible.)
Posted by Paul R. McNamee at 11:25 AM 1 comment:

recent read; A Conversation in Blood 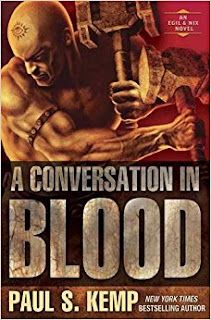 A CONVERSATION IN BLOOD by Paul S. Kemp

Egil and Nix are back.

The story started off a little slow this time. Egil spends too much time in his cups and Nix tries to pull his friend out of the downward spiral while feeling caged and edgy himself. Finally, Egil and Nix and their friends agree that Egil and Nix need to get busy with an adventure.

Spring-boarding from the previous story, Nix decides to investigate a mysterious treasure they secured on the their last adventure. As their luck would have it, the simple task of investigation blows up in their faces and they are soon on the run from wizards, unkillable creatures, and seeking sanctuary in the last place they want to go; the thieves' guild house - which they had assaulted in the previous novel.

Egil and Nix are their bantering selves and this time they are joined by a third adventurer, Jyme, who returns from their first story, THE HAMMER AND THE BLADE.

Kemp peels away a few more layers of the onion that is the history their world, too. Tantalizing tidbits.

Though the story is still very much (what I would call) sword-&-sorcery/heroic fantasy milieu, the stakes do get very high and large in scope by the climatic end of the tale.

Though events in A CONVERSATION IN BLOOD are initiated by events of the previous novel, the book can be read standalone.

A CONVERSATION IN BLOOD is another satisfying romp with Egil and Nix.

==
One complaint that has nothing to do with the story or the writing - the font of the mass market paperback. I am very disappointed with Del Rey. The font on this is just ridiculously small. Yes, I have glasses but I hate taxing my eyes as I get older. I find the use of tiny fonts with small presses, sometimes, and I assume they are cutting page count and cost. I still don't like it and I see no reason why a larger press like Del Rey needs to do such a thing.

Pay for the extra print pages!

Luckily, for my old eyes, I listened the audiobook.
Posted by Paul R. McNamee at 1:15 PM 1 comment: 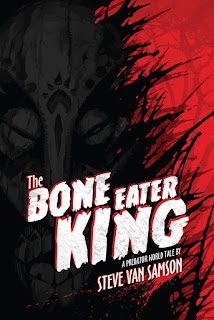 When an author states that one of Robert E. Howard's stories was a direct influence and inspiration to his novel, my ears perk up. When the author then notes "Hills of the Dead," rather than the expected Conan nod, you have my rapt attention.

"Hills of the Dead," of course, features REH's hero, the God-driven Solomon Kane, striding through vampires in an Africa of the 1500s.

Though inspired by Robert E. Howard's "The Hills of the Dead," this story is no re-tread. Van Samson chooses Africa as his setting but he wisely uses current (near-future) Africa rather than a past, pulp styling of the Dark Continent. Van Samson's Africa, while a post apocalyptic wasteland, touches on modern Africa - poverty and success, wealth and knowledge, game reserves, poachers, industrial complexes and modern cities.


Once there were no more plant eaters, carnivores had to turn on each other for food. Lion preyed upon the jackal and the hyena upon the leopard, but all cowered before the new apex, the matsatsaku maza.

The matsatsaku maza are monstrous vampires and Van Samson plays with traditional tropes and African myth to create his own unique breed of vampires.

The story tells of the red man, who we learn is in some form of vampire transformation. He is befriended by a hard warrior woman, with her own secrets and emotional baggage. They make their way through the deadly terrain, heading for sanctuary - of which there is little to be found.

Van Samson handles the narrative very well. Confusion and fear are palatable. The non-linear unfolding keeps the reader interested and engaged. The African setting is stellar - another intriguing facet of the story.

THE BONE EATER KING is a startlingly original horror action novel that grabs you tooth and claw and does not let go. 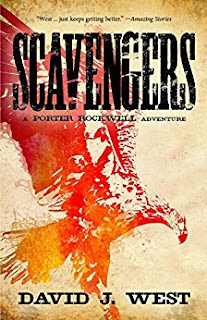 David J. West continues to challenge his story writing abilities and we're all the better for it. After walking, running, and haranguing Porter Rockwell through various adventures of the Weird West, West now brings us a novel length work which - for the most part - is a straight-up Western featuring the stalwart hero.

Rockwell finds himself caught up in the hunt for lost treasure. He makes a few friends along the way but mostly he is beset by enemies - hostile Natives, criminal gangs, a bandito army, a U.S. cavalry unit lead by an unscrupulous officer, and a manic German reverend with brainwashed followers.

Rockwell needs his guns, wits, strength and fortitude to blaze his way through adventure, enemies and traps. There are some great mental images I had while reading. West provides terrain descriptions that come to life, too. Porter is often out of the frying pan and into the fire as the cliffhanger action keeps the story moving along at a brisk pace.

The only touch of 'weird' here is the Reverend's mushroom-tainted communion drink and lost Spanish treasure. The rest is a Western, with a healthy dose of spaghetti-Western, at that.

If you like action-driven Westerns, you should give SCAVENGERS a read!
Posted by Paul R. McNamee at 11:00 AM 2 comments: