The blog has been quiet, so I thought I'd throw out a writing post wrap-up. Yes, I know it is still November but I have nothing else coming out this year.

In retrospect, it felt like a quiet year. But that was because I focused on novel writing for most of it. And, everything that came out this year had been in the pipeline since last year. 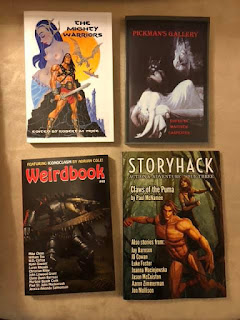 Four appearances. Turns out that is the most I've had in a single year. I'll take it.

The pulp serial, HOUR OF THE ROBOT, was delayed. Pro Se Press are hoping to get back on track. With luck, the serial will start coming out in January with the others that were announced.

It was a good--if not great--writing year. (yes, I know we still have December.) I finished two novels that had been languishing. I wrote and submitted a few short stories. I didn't get any bites but some of the stories were sent off to other slush piles that are still open.

I'm working through a short story now that will be completed and submitted by year's end. Then it's back to more chapters of the serial.

So, that's what's up with me on the writing front. I hope all you other authors are having success at either writing and/or publishing.