I hadn't planned on shopping on Free Comic Book Day. But, I received a Facebook note from a local music/comic chain (Newbury Comics) and in addition to free comics, they offered 'buy one graphic novel, get a 2nd for $1'.

So, I took my daughter and headed out. We were there by 10:45AM and it was quiet. The hardcore crowds had already descended and gone. The freebies were wiped out. No big loss - though I had thought about getting the new Elric series teaser if it was there.

I also wanted to get some Hellboy graphic novels, but they had none. I went with two Hellboy spinoffs, BPRD (vol 7) and Witchfinder (vol 1). I would have liked to start earlier in BPRD, but that was the oldest volume they had on hand.

I also bought a $1 grab bag. Came out with a 1-in-10 rare Red Sonja issue (cover art is "virgin" - no imprint). The oddest thing in the grab bag has to be Female Force with a fictional(?) spy account of Carla Bruni-Sarkozy. Definitely not one I'd read on my own, but because I have it, I'm rather curious read it. Grab bag also had #1 of The Expendables. I don't know if it is the movie adaptation or a spinoff of the movie storyline. (sequel or prequel?)

And a free pint glass, too.

Not a bad haul for spur of the moment shopping.

An Alarm of Crows 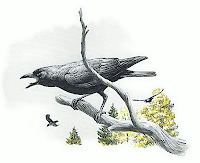 Last night, at dusk, I heard crows cawing outside. I've had some experience listening to crows. They have a distinctive caw when they are raising an alarm. Usually, they are busy harassing a hawk. Being the raptor-phile that I am, I started glancing out windows, looking to the sky and trees.

I spotted one crow directly behind my house, perched in a maple tree. I couldn't see any hawk. The crow flew off, over the roof, and headed to the front yard. I followed from the kitchen to the living room and gazed out the picture window, still searching for a hawk.

Then I saw what the crows saw. I should have been looking down. 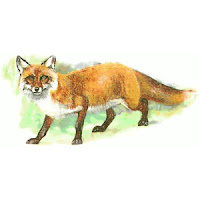 I just caught a glimpse of the red fox as it leapt over a stone wall into my neighbor's yard. I also spotted a white flash dashing. I assume it was a rabbit, but it all happened so fast it might have been the white tip of the tail of a second fox. Entirely unsure on that point.

If you've friended me on Facebook, this won't come as a surprise. Just two nights ago I overheard neighbors talking about hearing a fishercat, and it turns out foxes and fishercats sound similar when making their loud cries. I was suspecting a fox, I've had them traipse through the yard before. But with our healthy population of rodentia this year, I wonder if this fox will stick around. He has plenty to dine upon - chipmunks, red squirrels, gray squirrels, black squirrels, rabbits and we just spotted the woodchuck again over the weekend.

I'm fine with that, it's neat. Only slight concern is for my kids & wife outside playing. Rabid foxes, it seems for some reason, have no fear and attack people. I have no reason to believe this fox is unhealthy, but we'll be vigilant.