Well, I read 15 books in 2013.  But that's deceptive because that only counts books I read cover-to-cover.

I read lots of graphic novels, too.  I wound up buying & reading many comic issues as they were released this year.  I also read short stories, some which I forgot to note, probably.

Movie & television watching were nearly null except some older movies, Jeopardy and Doctor Who.  Not so concerned there.  I finished off some Tarzan movies right up to the wire.  Maybe I'll start noting the movies I watch next year.  I used to do that, but fell out of the habit when my movie viewing really slacked off. 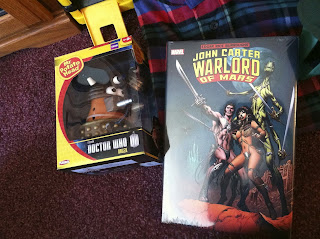 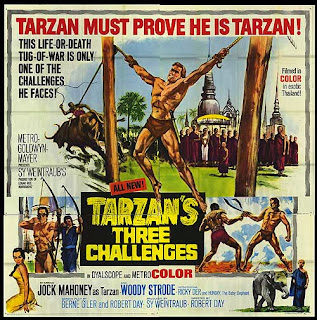 Trying to add to my Tarzan experiences, I watched Jock Mahoney's second and final outing as the lord of the jungle in Tarzan's Three Challenges (1963).

Following Tarzan Goes to India, this installment again takes Tarzan out of Africa.  This time, Tarzan goes to an unnamed Asian country (portrayed by Thailand.)  There, he must escort a child "chosen one" to safety for his installment as new leader of the nation.  But the current ruler's brother, Khan, is a jealous type.  Tarzan's road will be beset by villains.  But first, he must prove he is Tarzan and worthy to protect the child, and he undergoes three challenges of dexterity, strength and wisdom.

This movie was mostly enjoyable, a few moments over the top and some lingering shots of the exquisite locales of Thailand.  It is good rainy Saturday afternoon adventure matinee fair, if nothing else.

My favorite moment was Tarzan's third challenge; the challenge of wisdom.  I am not sure which martial philosophy it was taken from, but it is a nice little gem.  (Paraphrasing, because I can't find the exact quote online;)

Monk: After a march of a thousand miles, you will face your enemy in the morning.  What is the first thing that you make certain?

Tarzan: I make certain that it is my enemy, not me, who makes the thousand mile march!

The only drawback was, unfortunately, Jock Mahoney's portrayal.  The acting wasn't bad, but the physique and athleticism were wrong.  He was lanky, thin and seemed to have awkward and stiff body motion.

It turns out, that was with reason.  Mahoney contracted fever, dysentery and pneumonia nearly as soon as the production started on location in Thailand.  Co-star Woody Strode attributed the illness to Mahoney's own braggadocio of swimming across the largest river in Thailand - which was also the most polluted.  Mahoney was also, at that time, the oldest man to play Tarzan.  Mahoney lost 45 pounds during the movie, and it shows.

Though eventually he recovered, Mahoney was never quite the same and he was done with Tarzan and many other physical action roles he would have taken in the past.

I acquired this movie through the Warner Brothers Archive collection - on-demand printed DVDs of many movies that weren't available before.  A set of 5 Tarzan movies (2 starring Jock Mahoney and 3 starring Mike Henry) was released earlier this year.  Two weeks ago the price plummeted 45% on Amazon, so I finally grabbed them.  (It is currently still down 40%.)

I look forward to revisiting Mahoney in his first outing, and watching the other Tarzan movies in the near future.
Posted by Paul R. McNamee at 12:15 PM 1 comment:

In the Company of Ogres In the Company of Ogres by A. Lee Martinez

I am usually not one for humorous fantasy, but I trust Martinez.  Last year, his The Automatic Detective became an instant favorite when I read it.

Never Dead Ned can't get a break, and he can't stay dead. Oh, he dies, but he keeps getting resurrected. A guy like that could be handy as the leader of Ogre Company - it's too bad he's really just a military accountant with a lack of ambition.  Too bad his top three officers--a blonde Amazon, an ogre and an orc who insists he's an orc though he looks suspiciously like a goblin--would rather he stay dead. Ned wouldn't mind that at all, really.

I enjoyed this one, a lot.  Funny fantasy stuff without being snide satire or parody.  Really fun - something like Douglas Adams writing Catch-22 meets (Glen Cook's) The Black Company.


Martinez deserves a wider audience.  I'm not sure why he hasn't caught on.  To date, he hasn't written a series or even a sequel novel.  Each one is standalone.  Maybe this works against him.  He has enough requests from fans that he Kickstarted a short story collection - one tale per novel world.  It's the first Kickstarter I contributed to, and it's nearly ready.  Maybe the sampler will help, though it's really aimed at fans he already has.
Martinez has moved up my reading list for next year.  You should check him out.
Posted by Paul R. McNamee at 12:15 PM 1 comment:

I was at a local comic shop yesterday, they had a special table set out.  It was a Marvel collection they were moving along.  Trade paperbacks were 'buy 1, get 2 free.'  Nothing there jumped out at me.

But, on the second table, there were Marvel hardcover omnibuses.  These list at $100 cover price.

My jaw hit the floor when I saw they had a stack of John Carter Warlord of Mars on the table.  They had multiple copies, at least eight, I think.  The omnibus contains all 28 issues and 3 annuals, in color, hardcover, of the Marvel mid-1970s series.  (It was not the DarkHorse b&w reprint)

The temptation was palpable.  But, I didn't see 2 other omnibuses that held my interest.  I suppose I should have negotiated a different deal.  But, $100 is too much right now when it is the holiday season and I'm trying to cool off my credit cards.

I walked away.  It wasn't easy.

Last night, I checked eBay I was surprised how many are listed. On top of that most of them have a different (alternate?) cover, new, factory sealed, for around $30 including shipping! Some are even "Buy it Now," if you don't want to deal with auctions. I ordered one last night.

So, if you don't already have this and want a copy, now might be your time to hunt around.  Not sure why so many have popped up suddenly.

I have been trying to google up the image of the book I saw yesterday.  I haven't found it.  The cover was this comic image (I think, I could already have blurred the details); 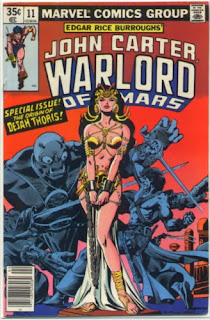 It's going to be Santa's present to me to keep the kids guessing ;)
Posted by Paul R. McNamee at 12:15 PM 3 comments:

This was a banner year for Doctor Who fans.  The show celebrated its 50th anniversary.  There were specials and all sorts of tidbits and quick web interviews.  Oh, and there were sales.  Some directly related to the jubilee, some just because.

I acquired a great many audio-plays, digital short stories, ebooks and comics.

Now that the 50th anniversary episode has come and gone, I have leftovers not unlike Thanksgiving turkey leftovers.  Here are some that I consumed recently;

I mostly enjoyed the stories, though none really jumped out at me as being declared a classic in the future.  The only one that really didn't appeal to me was the 1st Doctor's story.  Far too much physical derring-do for the 1st Doctor.  It didn't feel very much like the 1st Doctor, at all.

My favorite was the 2nd Doctor story, which involved the Necronomicon hijacking the TARDIS.  But, I'm biased toward Mythos stuff right now.

I bought each story individually, but they are going to be collected for a print anthology (and, I would suspect, an e'anthology.) 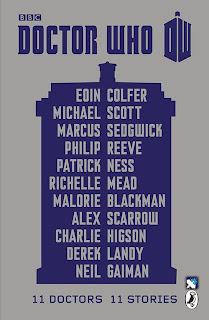 To celebrate the 50th year of Doctor Who, IDW Publishing ran Prisoners of Time over the course of the year.  Each incarnation of the Doctor got a turn in each issue, with a 12th issue wrap-up of the linking story.  The issues mostly followed the same pattern - an unrelated adventure that ended with the Doctor's companions being kidnapped by an unknown villain.

The villain reveal was a good one, if you've been watching the recent show.  It made sense.  The stories were fun, though some of the issues had art styles that did not appeal to me, at all.

Overall,  Prisoners of Time is a good comics celebration of Doctor Who's 50th anniversary.
Posted by Paul R. McNamee at 11:00 AM 1 comment:

The Hammer and the Blade 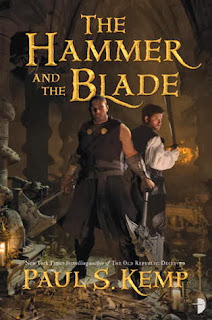 The Hammer and the Blade by Paul S. Kemp

I can't add much to the review already posted by Keith West.

This is a great slice of sword-&-sorcery.  Though it clocks in at the current page count of 400~, it's a quick breezy read that goes by like an old 300-pager from the s-&-s heyday.

I've already bought the sequel, and it is high on my reading list for next year.