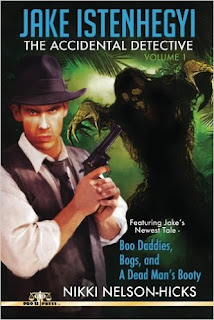 This book collects three tales featuring Jake Istenhegyi, a post-Prohibition, Hungarian immigrant to New Orleans who finds himself pulled into the world of pulp occult detective work (hence, the "accidental.")

"A Chick, A Dick, and a Witch Walk Into a Barn..." starts of the volume with a pulp occult detective bang. When Jake's private detective roommate goes missing, Jake picks up the investigation and finds himself knee-deep in vicious chickens, a loa possessed rooster monster, and a voodoo queen.

In "Golems, Goons, and Stone Cold Bitches," Jake gets caught between two sisters and the artifact they most desire. Along the way, Jake finds a ghost and learns disturbing family history concerning his uncle, from whom Jake inherited his bookstore. An uncle whose large illegal debt Jake is now expected to carry. By the end of the tale, Jake experiences magic that forever changes his life.

The volume closes with "Boo Daddies, Bogs, and A Dead Man's Body." This is the longest story and the most ambitious, with a large cast of characters, sub-plots, intriguing mysteries, and good twists. Laugh-out-loud moments, too.

Each story, while readable stand-alone, builds on the previous entries adding new elements to the world-building as well as revelations. They all flow naturally, nothing felt forced.

Quiet month here at the blog. Sorry about that.

I've undertaken recently not to post negative reviews. Unfortunately, my last couple of reads haven't really wowed me enough to post about them.

I am happy to report my current read (audiobook) is a lot of fun. I hope to finish it up this week and review soon.

I've been reading various short stories and comics, too.

The month is almost over so I guess I can add the "writing roundup" report for March. Eh. Too many zeroes. But, on the writing days I had good output. I also spent a good number of days editing. I submitted two stories (one by invite, one to a slush pile.) The current horror novel progresses, albeit slower than I would like.

I have a half-dozen submissions out there now. I hope to hear back on some of them during early April. 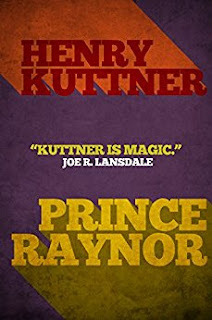 In the 1930s, pulp writer extraordinaire, Henry Kuttner, tried his hand at sword-&-sorcery. Elak (of Atlantis) is the better known series but Kuttner also contributed to the genre with a different set of tales, featuring a character named Prince Raynor.

Raynor only lasted two stories, each appearing in STRANGE STORIES - another pulp that tried to go to the mat with WEIRD TALES. Lasting thirteen issues, STRANGE STORIES lasted slightly longer than STRANGE TALES, which only managed seven issues. 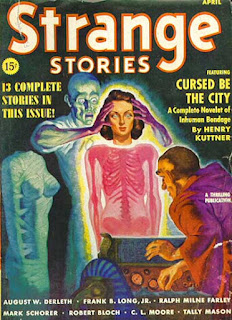 "Cursed Be The City" appeared in the April 1939 issue. The city of Sardopolis is under siege. A prophet within the city declares the city's doom. But he also declares the conquering King Cyaxares shall also be cursed. The doom that once dwelt in Sardopolis shall return.

Cyaxares conquers, kills the king, and places the king's son, Raynor in the torture chambers. Raynor escapes with the aid of his faithful Nubian servant, Eblik. They save a dying priest, and Raynor's path is set. He must free the great god Pan, whose altar once stood in the wild place that became Sardopolis.

I won't give away any more. 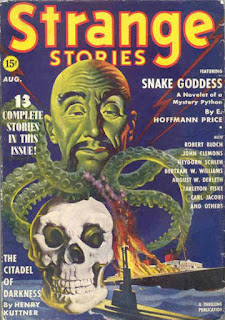 "The Citadel of Darkness" appeared in the August 1939 issue. In aftermath of Sardopolis's doom, Raynor, Eblik, and their female companion, Delphia, are wanderers. Grouping together some of the city survivors, they are beset by brigands and Delphia is kidnapped. A wizard named Ghiar aids Raynor, but pulls a sorcerous double-cross. Raynor finds himself in a battle with the brigands and the wizard and mighty powers of darkness beyond the ken of men.

The Raynor tales are darker than Kuttner's Elak of Atlantis stories. There is a feeling of direness and darkness akin to Robert E. Howard. While Kuttner was no stranger to employing the Cthulhu Mythos in his stories - indeed, one of the Elak stories is titled "Spawn of Dagon" - the crushing inhumanity of cosmic forces are conveyed more effectively in the timbre of the Raynor stories.

In "Cursed be the City," Raynor's willingness to unleash preternatural powers in his vengeance bring to mind Bran Mak Morn and "Worms of the Earth." Karl Edward Wagner pointed out there is a tragic/dark feel like Moorcock's Elric. Raynor is the last royal remnant of a destroyed empire, after all.

Reading the two stories in succession does highlight a formula. Both end with the hero employing a talisman to bring about the destruction of his foes. Kuttner sets the stage so that the resolution does not smack too heavily of Deus Ex Machina. Reading the two stories back-to-back, the technique feels a little heavier handed than it probably is.

As others do, I wish Kuttner had cranked out a few more Raynor adventures. It would have been interesting to see where he went. I wonder if he would have continued to formula or changed some plotting to be different, or it if would have been enough to crank them out easier with a set format and get his pay. 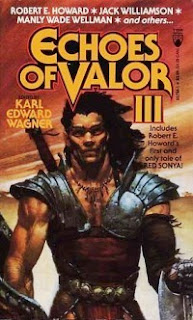 The two Raynor stories were also tagged onto the end of Paizo's ELAK OF ATLANTIS book as part of their PLANET STORIES line. 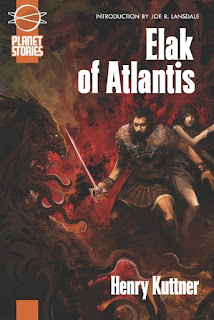 Both print books are, unfortunately, out of print.

Griasol produced some STRANGE STORIES replicas but it doesn't appear that they replicated the issues featuring Raynor.

Luckily for us, the two stories have been collected for ebook (at least, for Kindle.)

If you are a sword-&-sorcery fan and have not read Prince Raynor, I encourage you to do so.
Posted by Paul R. McNamee at 2:59 PM 4 comments: 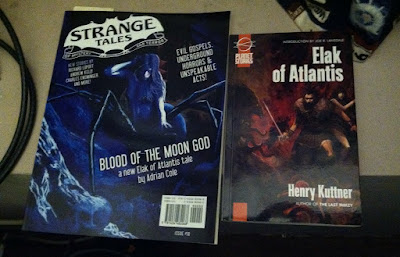 Yesterday I made mention of the old anthology, THE MIGHTY BARBARIANS. In that book, Henry Kuttner's story "Dragon Moon" appears. The story is the last of his tales concerning his sword-&-sorcery hero, Elak of Atlantis. The tale originally appeared in WEIRD TALES in 1941.

I recently learned (stumbled upon the fact) that Adrian Cole had written an Elak pastiche for STRANGE TALES in 2007, when the magazine was briefly revived by Robert M. Price.

I wanted to read Cole's story and today was a good day for it. I read Kuttner's tale first, too.

"Dragon Moon" tells the story of Elak giving up his adventurous ways to accept his destiny as king of Cyrena, one of the Atlantean kingdoms. Of course, his destiny is not so easily embraced or achieved. He must battle villains and monsters and armies along the way.

It's a fun episodic tale. Elak somewhat parallels Conan as far as a man who would prefer adventure over kingship.

Rather than a "between the tales" story, Cole's "Blood of the Moon God" takes place a year after the events of "Dragon Moon" (which worked out for me!) Elak is given to forest expeditions to relieve his royal boredom. Though he is a legitimate king by blood, enemies still abound, including unscrupulous cousins. Trapped by an ambush, Elak and his companions find themselves underground, fighting for their lives against worse foes.

I won't give too much away. I will say that we all know another s-&-s hero from Atlantis, and there are nearly as many Robert E. Howard elements to Cole's story as there are nods to Kuttner.

I was pleased with the story and believe it worthy of Elak and Kuttner.

If you are interested in Cole's story, copies of STRANGE TALES #10 are still available through Wildside Press. (disclaimer; I haven't read the rest of the issue yet.)
Posted by Paul R. McNamee at 9:40 PM 3 comments: 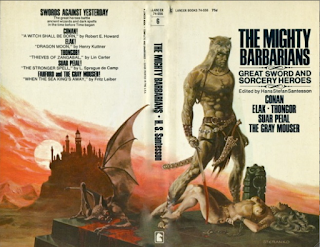 I am extremely pleased to announce: My story, "Lono and the Pit of Punhaki" will be a part of Robert M. Price's forthcoming, THE MIGHTY WARRIORS. THE MIGHTY WARRIORS is a sword-&-sorcery anthology, a spiritual descendant of THE MIGHTY BARBARIANS and THE MIGHTY SWORDSMEN from back in the day.

Very proud to share the t.o.c. with great writers and very proud my heroic duo, Lono and Makani, get to mingle with other great s-&-s heroes!

(Thanks again to Robert for the opportunity and to Sam Gafford - Ulthar Press stepped up and will be publishing this one!) 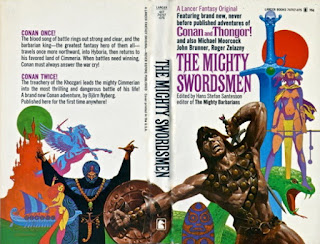