Forging ahead with reading tech

I wanted to try some small press e-zines/e-books, but they were in PDF format - which meant reading on the computer screen. I read, however, that the Kindle (Kindle 2) has native PDF support.

First, I dragged some test PDFs over, and they didn't show up on my index. OK. I needed to update the software on my Kindle. The update came out just after Xmas, just after I received mine. Updated smoothly, no problem. PDF files showed on the list.

However, as some Google hits told me beforehand, the native support isn't anything to write home about. You can't adjust font size, the document is very static. It was like reading microfiche without the machine. You could change the orientation to landscape, but it didn't help much.

Off to Google again. There are many methods of converting PDF to Kindle readable formats. Or, for a fee, you can email the doc to Amazon, through a converter, and sent back to the Kindle.

I went with the free option of MobiPocket.com. I downloaded and installed the free publisher, imported the PDFs, rebuilt them into .prc files and dragged them to the Kindle directly through USB. It works great, files (with embedded illustrations, even) came through without any noticeable issue.

After that success, I went to Lulu.com and bought three items - two issues of Dark Worlds magazine and the new anthology, Swords of Fire.

I've converted those, and sometime in future I'll pull them over to the Kindle and start reading! (only, I wish the PDFs included those great covers, they appear not to - but it's the stories that count.)

Honestly, it might have taken a while to type and to read this, but it was simple and quick thing to do once I was setup!

Quick followup note on an earlier reply to David J. West - yes, the iPad already has a comic reader app. Marvel has created one. (also works on iPhone/iTouch, though with devices that small I guess you'd be looking at one panel at a time - if that!) 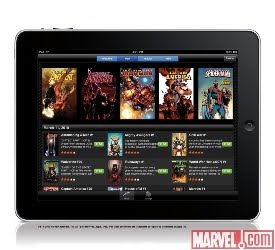 I don't have an IPad nor a strong interest in one just now. But in future, depending on what apps it has that can be useful or recreational, I'll definitely be keeping an eye on it.