Well, here's a break from all the media review stuff.  I was on vacation!  My in-laws are celebrating their 50th wedding anniversary this year, and my wife & I are celebrating our 10th.  My in-laws threw a bash, took us and other in-laws on a cruise.

My in-laws were accommodating.  I get motion sick far too easy, and my daughter has shown a tendency toward car sickness, though she has been much better since we gave her sea-bands and lollipops on long drives.  I also didn't want to deal with a airplane transfer with kids in tow, so my in-laws arranged for a short cruise (4 days) that left from Boston.

We had one stop - at Saint John, New Brunswick, Canada.  We took a brief 'trolley' (bus) tour of the city.  Mostly historic highlights.  Interesting bits - like the two Hollywood connections - both Donald Sutherland and Louis B. Mayer grew up in Saint John - about as far from L.A. as you can get.  (I didn't realize until he said it, but our driver/guide sounded a lot like Donald Sutherland.  So, if you're wondering what kind of accent Sutherland has, it's Saint John, I guess.)

I liked Saint John, though we only saw it from the tour bus.  The kids were too tuckered out to try walking around downtown and back to the ship.  We bought a few souvenirs at a catch-all tent at the disembark.

Although I have not been as blown away by Dark Horse's Robert E. Howard's Savage Sword as I would like, I am still interested in continuing on.

Issue #6 has been pushed out multiple times.  I checked the Dark Horse site yesterday, and now it is pushed to October 2013.
But, I did also spot that #7 is on the schedule.  Granted it is scheduled for November 2013 (my birthday, in fact.)  But if #6 is so backed up, I wouldn't expect #7 until next year.

I am constantly on the prowl for backlisted books getting the e'books treatment.  Today I thought of Robert Adams' Horseclans series.  I'd read the first two novels but never got back to the series.

It appears they were recently (October 2012) made e'available - at least, on Kindle.

That's the good news.  The bad news is .. well, the cover art could be a lot better.

I know - it's just an ebook - but I still like to see some thought and artistic effort applied to the covers. 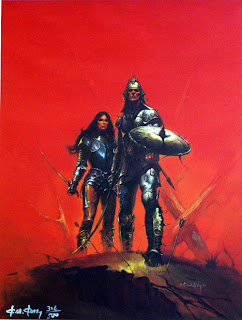 Also good news; unlike some other series that are back that I feel are overpriced, they're holding the Horseclans e'books to $4.99.  Still probably cheaper to find the used paperbacks, but really not a bad place to start.  Maybe there will be some sales in future.

On the wishlist for now.

Throwing this out there;

So, here's a thought I had today.

Sometimes I notice an Amazon listed Kindle edition goes missing (sometimes, it just changes and I re-search for it.) But, in this case let's say the e'book is no longer carried by Amazon.

Now, I own a copy from before.

If I "remove from device" can I still expect to be able to pull that title back from my Amazon archive, or are they totally reliant on their current stock and contracts?

I know of one such e'book, at least. I have it on my Kindle, but they don't list it now.

In my account, I still see the option to deliver from my library to my device of choice, but I wonder if that would get an error?

(Just to be safe, I'm still copying my Kindle content manually to my own backup!)

This was a pleasant surprise.

I'd bought this one a while ago, just because I'm a completist - I piggybacked it on some Amazon order or other.  I spotted it in my Doctor Who Annex and decided to finally watch it.

The Doctor stops at an American roadside diner for a bowl of chili.  Rather than food, he comes face to face with an alien artifact, large bug aliens, MIBs, Roswell aliens, U. S. military conspiracy, Area 51 and a flying saucer or two.  He makes friends, defeats enemies, and saves the Earth - again!

The CGI animation is stiff and no-frills - which is a bit odd when you have access to CGI.  But,  a few minutes of hearing David Tennant as the Doctor (again) made me put aside any misgivings about the visuals.  This a fun story, and as much as Matt Smith's current run as the Doctor has been enjoyable, seeing something 'new' from Tennant was pure joy, even if his face was animated by a computer.

The DVD set also comes with a bonus disc of the Greatest Moments specials that featured highlights and interview snippets from cast & guest stars.  They were a fun review of the Eccleston and Tennant years (minus the last specials from Tennant.)   Of course, I wish it had been a full retrospective back to the original series - especially when delving into old foes.