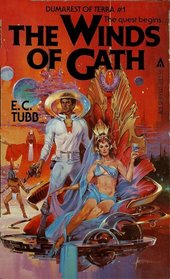 The Winds of Gath by E. C. Tubb

I didn't know anything about E. C. Tubb until his death in 2010, and then I read all sorts of tributes and posts.  The mention that really caught my attention was from author John Maddox Roberts, who noted (on the REH Forums,) "I loved those [Dumarest] books. If Conan were a spacefarer, he'd be Dumarest, just with a knife in his boot instead of a sword at his belt."

As you can imagine, Tubb's Dumarest went right on my radar.

Winds of Gath is the first novel of the series.  Dumarest is stranded on the planet Gath, where pilgrims and tourists caravan to the mountains to hear the singing winds.  But the winds are dangerous, driving men to madness, and the coming storm is worse than anyone predicts.  Against that backdrop, Dumarest becomes embroiled in political maneuvers including assassination attempts.  He must stay alive, and earn his passage from Gath.  There is action and intrigue.  The setting, the setup of galactic factions (that will continue throughout the series) and the characters were all interesting and had their own voices.

Dumarest is his own character, but I can see why there might be echoes of Conan.  I felt more like Dumarest reminded me of Ian Fleming's original James Bond.  Not that Dumarest is a spy anymore than a man who becomes king - but when he kills out of necessity he executes with grim precision.  He lacks the red lust of Conan when it comes to mortal combat.

I enjoyed this story, and as a bonus, it was an "old school" novel - a short, quick read.

If you can't hunt down the paperbacks, the entire Dumarest series are available as e'books, though I wish they were priced a bit cheaper.

I'll be reading more of them, for certain. 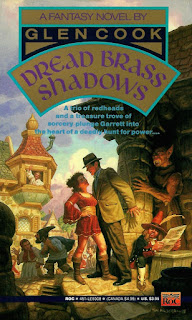 I was surprised to look back over my 2012 reads and realize I had not read a single Glen Cook novel. I usually read at least one.  I grabbed Dread Brass Shadows off the shelf.

Garrett is a noir private eye whose beat is the fantasy city of TunFaire (which Cook bases on St. Louis.)  Unlike most "urban fantasy" featuring fantasy creatures in our modern cities, this is the opposite - a human gumshoe in a fabled city populated by multiple races - human, dwarf, elf, ogre, etc.  Also should note; Garrett is not some guy who fell through from our world, either.  He's a native of TunFaire, a Marine veteran getting by the only way he knows how.

I don't know if Cook invented this milieu, but he does it very well.  He is faithful to the tones of Raymond Chandler, Dashiell Hammett, et al. while pulling in all kinds of sorcerous and fantastical elements.

This time out, Garrett must locate the Book of Shadows - a magic tome spells that allow the reader to take the shape and form of whatever is on the brass-plated page.  Battling factions catch Garrett in the middle, as he tries to understand why he got pulled into the situation in the first place.  The stakes rise as Garrett finally understands he must confront the biggest mobster chief in the city - and only one of them will come out alive, this time.

I always enjoy Glen Cook, and Dread Brass Shadows was no different.
Posted by Paul R. McNamee at 12:00 PM 4 comments: 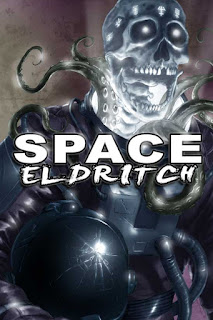 For various reasons, I figured this anthology of space opera meets Cthulhu mythos was worth a deeper review.  Here's a look at all the stories.

Correia provides a fun introduction here, answering the question "Lovecraft in space?" with a resounding "Yes!"


“Arise Thou Niarlat From Thy Rest” by D. J. Butler

This story requires the reader to pay attention, but the rewards are worth it.  Butler explores a mythos angle I have not read very often - not only are the Old Ones ancient, but in the case of this story, they exist simultaneously across space and time.  Butler weaves three points in time, and three disparate threads into a cohesive tale as a priest of ancient times attempts to manifest the Old Ones by way of a future colonizing spaceship and a 1930s private investigator's case gets caught in the middle.

Collings gives us a nice twist, too, as alien invaders bring worlds to their heels until they tackle the wrong world.  The insect nature and alienness of the protagonists is wonderfully realized throughout this tale.  And in the end, just when you might think the aliens are Lovecratian, the aliens themselves are caught in the dead center of a new Dunwich Horror.


“The Menace Under Mars” by Nathan Shumate

A terraforming team on Mars discovers underground evidence of a previous civilization.  A good atmosphere of tension building runs through this story.  We all know what a "rock that just appears to be an artifact" on the Martian moon Demios really means. Broken minds and alien possessions soon follow.

David J. West turns the Cold War space race on its ear in this tale.  Rather than jumping into the future with far flung worlds, West keeps us in the past with clandestine space flights between the U.S. and the Soviet Union, as cosmonauts and astronauts are tangled by a Jack Parsons inspired character and his sorcerous, nefarious plans.  In orbit, no one can hear you scream.  It's been mentioned elsewhere and I agree - pulpiest tale of the group and this is a good thing.


“The Shadows of Titan” by Carter Reid and Brad R. Torgersen

On Titan, a crew discovers an ancient pyramid and a creature in suspended animation.  The hot-shot captain puts everyone in danger as the alien presence enters her body and mind.  The survivors must battle to keep the aliens from gaining passage to Earth.


“The Fury in the Void” by Robert J. Defendi

Somewhere in the far future and far reaches of outer space, two spaceships - one Russian and one Greek, battle out old heresies and wars.  But something is toying with their minds, driving them to rage and madness.  This story was appropriately violent, and had echoes of Warhammer 40K to me, in a good way.


“Flight of the Runewright” by Howard Tayler

This was a highly original tale.  Having read some Brian Lumley mythos stories lately, I would say this ranks right up with those.  A cruise ship laden with Necronomical symbols offers the faster, surest way to escape the Earth and travel further through the spheres than mere atomic drives or faster-than-light or rockets could ever provide.  As the protagonist takes his insane twin brother's place on the lottery for the voyage, things are not what they seem.

---
I really enjoyed this entire anthology.  The only weak spot was that the plots felt too similar between "The Menace Under Mars" and "The Shadows of Titan."  I've seen some reviews exaggerate this and state you can't read all these in one pass due to similarity.  I disagree.  All together, this is an exceptional, original anthology with distinctive entries.  It was a welcome change on mythos stories.  Very enjoyable and worth reading.

You can get the e'book through usual channels, and a print edition is now also available.
Posted by Paul R. McNamee at 10:03 PM 4 comments: