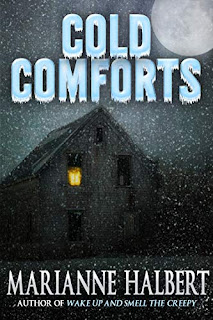 Another spooky read for the Halloween season. Halbert writes quiet horror, and disturbing, haunted atmosphere well. There are thirteen tales in this collection, and each one pulled me in. From the clairvoyant girl in the morbid "A Bone To Pick," to the fairy tale folk horror of "Housing the Hollygobs," to gallows humor of corporate Hell in "Like Riding a Bicycle," the tales in this book do indeed deliver cold comforts. 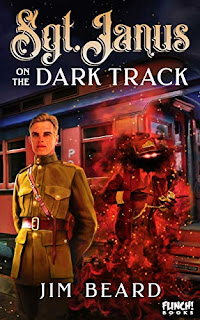 Sgt Janus on the Dark Track by Jim Beard

Settling in for this year's Halloween reads, I started off with Jim Beard's latest adventure of Sgt Janus. (see earlier reviews of the first book here and the second book here.)

Who Rides the Dark Track?

Returning on a cross-country train trip from a prestigious speaking engagement with his occult-minded colleagues, Sgt. Janus encounters one of the most haunting, most dangerous spirits of his career—and must deal with his abject failure to contain it.

To fight this prevailing evil and save the life—indeed, the very soul—of an innocent young woman, the famous Spirit-Breaker must consider taking a desperate path, one he possessed no previous knowledge of despite his vast experience with the supernatural. He must take the Dark Track.

Only hinted at in the tomes in Janus’ occult library, the Dark Track is not to be ridden lightly, and in fact threatens to alter its passengers beyond recognition. Join the sergeant and his intrepid companion Valerie as he pushes all his doubts and fears aside and makes a momentous decision—to forget all he knows and everything he’s learned to confront the darkness in an entirely new way.

ON THE DARK TRACK is another strong entry in the series. While this volume can be read stand-alone, reading it in context of the series once again highlights Beard's daring in not doing the same thing twice. Whereas the first two volumes were story collections (and those varied from each other in the best way possible [see earlier reviews]) here we have one novel-length story.

Beard's writing superbly conveys atmosphere. The train and its haunts come to life from the page. As promised, the situation flummoxes our stalwart spirit-breaker, forcing him into unfamiliar territory, where he is challenged at each turn.

(Also worth noting; my earlier reviews were for the Airship 27 editions [audiobooks, specifically.] Jim has since moved the SGT JANUS series under his own publishing company, Flinch! Books. All the books now have matching artwork covers, and the earlier volumes have been expanded.) 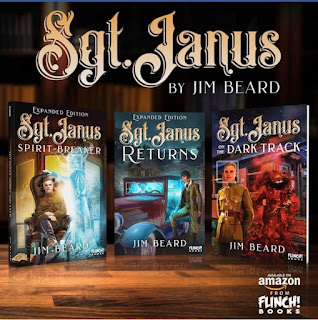