I know - this blog is about as exciting as watching paint dry of late.  Thanks to you - my few loyal followers - for checking in.

Nothing new to report.  I am still behind writing, still reading The Religion.

I have read quite a few single issues of various comics; Superman, Action Comics, Justice League, Planet of the Apes.  I am still enjoying them all.

Betrayal of the Planet of the Apes and Avenging Spider-man have started, and I bought the first issues of those, too.

I haven't specifically mentioned this to family, but I wouldn't mind a iPad for Christmas.  That's kind of steep, though.  If I don't get one, I'll probably buy one early next year.  I really want the comic reader(s.)  Collecting the print issues is fun, but I really need to manage my space at home.  Also, some of the fonts are getting to my aging eyes.  Being able to focus on enlarged digital frames would be a boon.  So, I am considering following these opening arcs in print and then switching to digital - at least for the DC and Marvel titles.

Bonus perk would be having all my app eReaders in one place - though I'll probably still keep my (hardware) Kindle on the side.  Maybe even upgrade that, too, next year.

For the Thanksgiving record, I am thankful for my family, friends, a steady job, food on the table and roof over our heads.  I wish the same for everyone else.   Let's hope the country is in a better economic state this time next year.
Posted by Paul R. McNamee at 12:30 PM 3 comments:

I managed to brush my wrist over something.  Whether it was a poison ivy leaf or some residual oil on a piece of wood, I don't know.  Nasty patch on my wrist, a few random spots on my body.  It could have been a lot worse.  The wrist is localized enough to keep covered and not spread.   It's still a nuisance.

On a totally different note, I am finally the victim of an email hack.  Joy.

Ages ago, (when my ego was larger - stop laughing) I setup my own domain.  I grabbed the first ISP that came along, and wound paying too much and getting very little - in diskspace, certainly.  It was such a tiny allotment, I created a Hotmail  account to move big files, and register various websites (forums, etc.)

I moved the personal account elsewhere, and kept it for personal email.  But, my Hotmail account got hacked the other night.  I had gotten lazy and occasionally dropped an address into the Contacts list.  Spammer went through the list and spammed some folks.  I changed the password, wiped out the Contacts list, but today I still got blocked out.  The only reason I want in now is to delete the account.

I've setup two Gmail accounts.  One personal, one for everything else.  I'm going to ween off the domain thing.  It doesn't cost much now, but with the blog serving as a hub, I don't really feel like I need a domain anymore.  Or, maybe I'll keep it for the redirect and just stop with the email there.  I have time to think about it, I just renewed a few weeks previous.

I'm liking the interface and concepts of Gmail; labeling emails instead of foldering them - allows multi-tag on a single email, instead of deciding which folder to keep it in.  Archiving and lots of space to keep years worth of email (if you want, I like to run light with email folders.)  And, it's Google, so searching for old emails will be a cinch, especially with labeling and other meta-data.

In theory, it will all work wonderfully...until the next hack.
Posted by Paul R. McNamee at 7:15 PM 2 comments:


Fantasy author Ty Johnston’s blog tour 2011 is running from November 1 through November 30. His novels include City of Rogues, Bayne’s Climb and More than Kin, all of which are available for the Kindle, the Nook and online at Smashwords. His latest novel, Ghosts of the Asylum, will be available for e-books on November 21.

To find out more, follow him at his blog tyjohnston.blogspot.com.  He offers all kinds of links and experiences with e-publishing, along with wonderful concise reviews of books he has read -  including many lost classics rediscovered via public domain e-format. 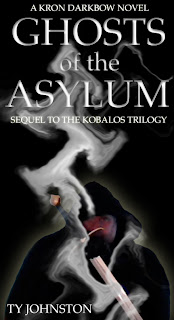 Though this month I’m traveling from blog to blog while promoting my new epic fantasy novel, Ghosts of the Asylum, today I’d like to talk about something more personal, but relative.

When I was ten years old, my mother became a victim of violence. She almost died. Her neck was almost broken. She was left with two cracked discs in her neck and enough pain to cause her to scream.

Growing up in a single-parent household, I had no one to turn to. My father lived a long distance away, and though he helped as much as he could, he was not able to do anything immediately.

Once my mother was free of the hospital, she returned to work and we went on with our lives.

When I was 16, one night at work my mom was pushing a cart and something else cracked in her neck. She was able to drive home, but once there all she could do was lay in bed and scream from the pain. I was older now, and once again I called for the ambulance and rode to the hospital.

In many ways, I grew up in hospitals. For nearly 30 years my mother worked in a hospital, and since she was a single parent when I was young, it seemed I was always hanging out in the hospital waiting for her to get off work. It didn’t bother me emotionally, at least not until I was spending all my time at the hospital watching her slowly heal.

As I mentioned above, I had no one to turn to.

But then I did. Perhaps you’ve heard of him. His name is Terry Brooks.