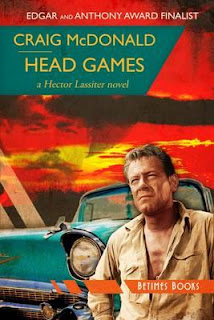 Well, I saved the best for last. This was my favorite read of the year. Well, my favorite listen, anyway. Hector Lassiter is a pulp crime writer, a novelist and a screenwriter (who tends to get more anonymous "script doctor" duty than screen credit.) He lives the pulp life - too many cigarettes, too much booze, too many women and Mexican whores. And he gets embroiled in capers and crimes. This time, he's caught up in a shell game of skulls - one of which was on the shoulders of Pancho Villa. The skull is worth money, if delivery can be made running the gauntlet of FBI, CIA, Skull & Bones society frat boys and Mexican bandits. Beyond that, the skull might be the key to a lost treasure hoard of the Mexican Revolution, putting desperate, violent men on Lassiter's tail.

Lassiter is a fictional construct who McDonald weaves through real history and personalities. Old Mexican Revolutionaries, old mercenaries, Hollywood greats. Maybe the audio narration helped, but Lassiter has a very real, gruff voice. This novel just zips along. The veracity balances the outlandish every step of the way.

It's all that and more. The whole definitely exceeds the sum of its parts.

I will be reading more entries from the Hector Lassiter series.
Posted by Paul R. McNamee at 1:27 PM 3 comments: 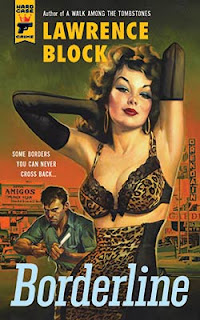 Here's a lesson for you - you might want to research these titles before you dive in.

Why? Because this isn't a Lawrence Block novel. Oh, he wrote it. But he wrote it under a pen name, "Don Holliday" when it was published originally...as Border Lust.

"Lust" as in sex and old "nightstand" pulp novels for men. 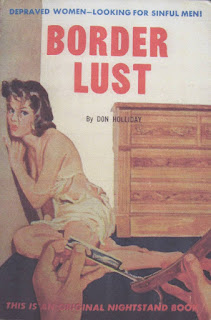 The novel features four main characters washed up in El Paso; a gambling man, a wanton divorcee, a drifting prostitute and a serial killer. The serial killer is really the only crime thread happening. The rest of the stories are sex tales in various forms. The divorcee and the gambler hookup up, spend a wild night on the town in Juarez, Mexico, which just makes the divorcee hot for wilder stuff. Meanwhile the creepy guy with the razor is attacking women on both sides of the border.

Now, I'm not a prude. I wouldn't say this stuff was triple-X but it probably would be considered X-rated.

If anything, it felt like I was reading a Russ Meyer movie.

Anyway, I was looking for more crime and less sex (as fun as the sexy covers might be.) I am still going to delve into the Hard Case Crime line, but I'll be a little more careful about double-checking the origins of any given title before I start.
Posted by Paul R. McNamee at 10:10 AM 3 comments: