I've been itching to get back to science fiction reads for a while. Of course, I am seeking out action & excitement oriented stories, not cerebral deep-thinks. I've been remiss in my reading of Edmond Hamilton. So, I picked up this omnibus and started reading. 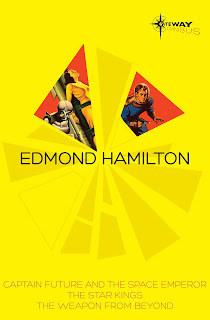 CAPTAIN FUTURE AND THE SPACE EMPEROR
I thought this was an okay story but I wasn't moved to keep reading Captain Future adventures. The team of characters are fun (a brain in a box, a metallic robot, and a plasticine android support Captain Future.) In this debut adventure, Future is hunting down a villain who is stirring up trouble among the natives on Jupiter. Imaginative elements keep this light fun.

THE STAR KINGS
A running adventure of trouble after trouble, influenced by PRISONER OF ZENDA. Gordon, a man from Earth, trades bodies with a prince from the far flung future. Trapped in the future, Gordon falls deeper and deeper into political intrigue as the galaxy teeters on the brink of war. As described in the biography at the end of the omnibus, Hamilton was best known for his "extravagant, romantic, high-adventure style of SF" and this novel is a prime example.

THE WEAPON FROM BEYOND
Hamilton wrote a STARWOLF trilogy in the 1960s. He brought his chops to the table for a different era of space opera readers.

Morgan Chane is an Earth-born, Varnan-raised space pirate (a Starwolf). He flees into exile and falls in with a mercenary outfit. Their latest job is to stop one world from acquiring and using a super-weapon against another world.

This is the story I'd been waiting for. This tale has a lean bite compared to the other novels.

The trilogy was reprinted in an omnibus by ACE. I'll be reading the other two novels.