End of a (retro) era

This was announced in February, but I missed it.

If there are any of their great titles you were considering buying, you might want to do it soon before the supplies dry up.  I ordered the three Robert Silverberg titles (that finished out the line) last night from Amazon.

I didn't get a subscription and I didn't get every single title, but I bought a whole lot of them.  I'm glad they are on my shelf.

I hope they can still put out a few per year.  I was just commenting over at Grognardia that a collection of Gardner Fox's Niall of the Far Travels tales might have potential as a Planet Stories project.
Posted by Paul R. McNamee at 7:00 PM 9 comments:

Apologies on being late with this post.  Busy month, lazy month, etc.
Most of you know about these stories, and with the slim number of followers I have, I suppose this is late and preaching to the choir.
But, I need to keep this blog afloat so, here goes.

Recently, three writers have self-published e-tales involving Orcs.  The only common thread, aside from the Orcs, is that the stories were salvaged from a canceled anthology.  Each runs for $.99, or sometimes free if you catch them at the right time.  For $.99, they are cheaper than a cup of gourmet coffee, and each is satisfying in its own way.

Amarante: A Tale of Old Tharduin by Scott Oden.
Of the three tales, this felt the most "epic" fantasy, though Oden delivers hard-hitting scenes that put this tale more into the "sword-&-sorcery" sub-genre.  Two Orcs, barely escaping some powerful (and well described) sorcery, seek vengeance against the humans who refuse to bow to their Orc overlords.  Oden creates a well-crafted viewpoint between the Orcs, with good interplay between the reluctant allies.  The Orcs are right bastards, and the "bad guys" - you don't exactly want them to win,  but there is enough tension that you want to follow them through to the end.

Harvest of War by Charles Gramlich.
Gramlich flips our expected sympathies by showing the dark side of humanity, as a lone Orc is captured, tortured, and treated worse than a zoo exhibit.  Not that Khales the Orc, doesn't have blood on his hands, either.  The nice turn in this story is not only the examination of human brutality, but human shortsightedness.  The humans zealous extermination of the Orc race puts them at a disadvantage they are not even aware of.  A really well-executed tale.

Blackskull's Captive by Tom Doolan.
Doolan takes us into space opera territory, which might seem odd to some readers, but Black Library, for instance, have Orks in their futuristic universe of Warhammer 40,000.  Doolan's setting is also heavily influenced by the animated movie, Treasure Planet, (in turn based on Treasure Island,) so we also get an Age-of-Sail vibe.  A captive human, Jack Munro, becomes an unwitting aide to an Orc pirate captain.  Staying alive could be at the price of his soul, as the Orcs ply him to help plan attacks on more human ships.  Doolan could easily have skirted the issue with a tale just long enough to get Jack off the ship before the next raid, but instead he makes Jack deal with the issue, and this gives the story an extra emotional edge.

(p.s. - for now, I will ignore that Tom Doolan published another Orc tale this week, thus breaking the trifecta theme ;P  But, you can check that out, too.  More at his blog.)
Posted by Paul R. McNamee at 9:21 PM 4 comments:

recent read; The Jewel in the Skull 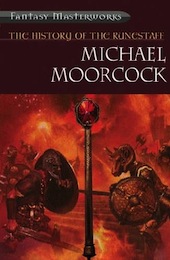 The Jewel in the Skull, the first novel of The History of the Runestaff omnibus, is another foray into an aspect of Michael Moorcock's Eternal Champion.  I've only read Elric tales and a few standalone novels (The Silver Warriors) from Moorcock, so I've been looking forward to trying something a bit different.

The setting is a fictional world, but is our own - a far, far future post-apocalyptic Earth with Granbretan (Great Britain) as the evil Empire, spreading its dark clutches and chaotic madness into the heart of Europe.  In southern France, the Kamarg, ruled by Count Brass, is the only area able to resist the Empire.  Hakwmoon, a Germanic prisoner of war of Granbretan, is offered a deal if he will infiltrate the Kamarg.  To seal his agreement, a black jewel is implanted in his head that allows the Granbretans to see everything he sees.  And, should they not trust Hawkmoon, they can kill him from a distance by the scientific sorcery of the black jewel (it is, perhaps, related to the black sword of Elric.) 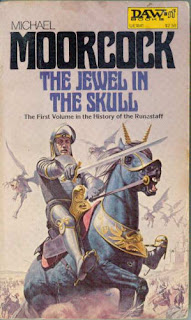 I generally enjoyed it as a fun, quick read.  It could be one of those famous Moorcock "wrote it over a single weekend" tales, though.  I found it unbalanced.  The action is good, but it takes a long time to get going.  The entire first act doesn't even feature the central hero, Dorian Hawkmoon, but rather focuses on the man who later becomes his ally, Count Brass.  Quite a few coincidences pile on in the third act, too.  At least with Moorcock's Eternal Champion and Multiverse, it is a little easier to shrug off disbelief, as many things are fated to be such.

I will be continuing on with the omnibus, but I'll take a break to read some short stories this week before heading back into The History of the Runestaff.