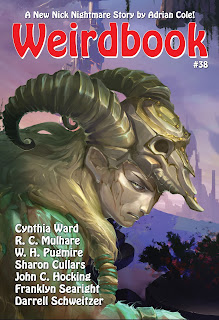 I've been acquiring magazines (electronic and print) in addition to books and I should start reading more of them. And by magazines, of course, I mean anthology fiction magazines.

I should also review the newer titles to support the 'zines out there now that are delivering the kind of stuff I enjoy reading. Weirdbook is certainly one of those titles.

#38 is a good mix and like every anthology, some stories appealed more than others. I should think any pulp fan would enjoy it for the most part. The content is truly a "Weird" mix with fantasy, sword-&-sorcery, and horror (including Lovecraftian horror.) There are poems in the mix, too.

All of the current run of Weirdbook helmed by Douglas Draa are available - even cheaply for Kindle if you want. (this issue is currently the least expensive in eformat.)

Because I want to support them, I feel a little conflict of interest reviewing this magazine for the following reason; I must now publicly disclaim that I am scheduled to appear in Weirdbook #40.

This is also why I am giving a high-level simple review. I don't want to review each story or pick out favorites.

So, all the more selfish reason for me to ask you to keep these 'zines going!
Posted by Paul R. McNamee at 9:52 AM 2 comments: 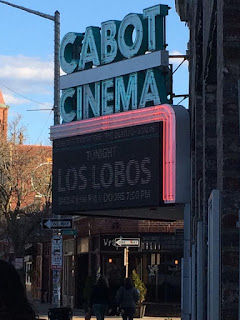 It had been a long time since I'd bothered with going to see a rock'n'roll show. But the opportunity to see Los Lobos in a small theater on a Saturday night was too good to let pass. My wife and I rolled together a date night and an early anniversary celebration, had a nice dinner, and attended the show.

Los Lobos started in with a one-two punch of "Will The Wolf Survive" and "Shakin' Shakin' Shakes." After that, the set list came from the top of their heads. They played a first set that was cut short due to technical difficulties. The guitar tech was on stage constantly. The main issue seemed to be the guitars not cutting through the mix - though other trouble came, too. (e.g.; broken guitar strap mid-song.)

The band soldiered through but went to an early intermission after 35 minutes and 6 songs (which ended with a spectacular jam on "That Train Don't Stop.")

The techs took care of the sound during the break. Not sure why things were so off. Without an opening band, levels should have been locked in during soundcheck.

The band came back on fire, ready to erase the earlier problems and they meant business, with Dave Hidalgo firing off a blistering acoustic guitar solo on "One Time, One Night." From there they started into a Mexican set with "Carabinas .30 .30" The rock and blues returned with "Chains of Love," "The Neighborhood, "Wicked Rain," and others before they closed their main set with a rollicking cover of the Grateful Dead's "Bertha."

For their encore, they had a surprise up their sleeve. They invited local musicians Barrence Whitfield and Willie 'Loco' Alexander to join them. They first served up a blues/R&B song and then blasted out the venue with Whitfield wailing through The Who's "My Generation."

It was a great show, complete with flaws, and I can't wait to see them live again - especially if it's in an intimate venue like The Cabot. 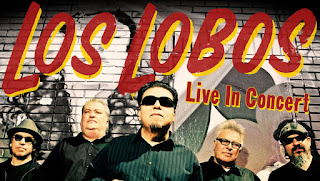