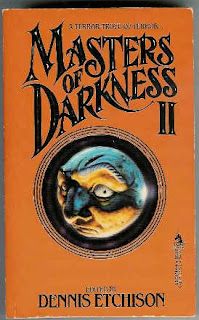 I decided to get an early jump on my Halloween reading this year. I'd found this book used for a song a few months ago. The lineup in the table-of-contents sold me on it.

It's a solid roster of horror stories. (follow the link to read the t-o-c.) They run the gamut from ghosts to monsters to human monsters. A couple weren't to my liking, but that is a matter of personal taste.

My personal favorites came at the end.

George R. R. Martin's "The Monkey Treatment" tale relates the tale of a hapless man committed to a dangerous diet. It is both humorous and horrific.

Richard McKenna's "Casey Agonistes" concerns veterans of the Yangtze Patrol. This story is set years later in the TB wing of a VA hospital. Death is coming for them but they make the most of it. There is a genuine feel of veteran camaraderie here, and it has poignant moments. (McKenna himself was a veteran of the Yangtze Patrol and he wrote The Sand Pebbles.)

I also like this anthology because each story has author notes, as well as the usual author publishing biographies. I enjoy reading "behind the scenes" notes for stories.

There are two other volumes. Honestly, I already have too many horror anthologies, so I'm not hopping on eBay just yet. But if I see either of the other two volumes in my used book store travels, you can bet I will be snatching them.
Posted by Paul R. McNamee at 3:08 PM 2 comments: 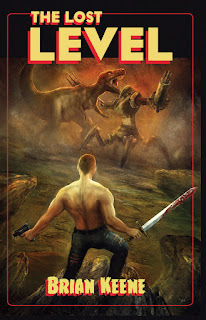 The Lost Level by Brian Keene

I tore through this book this past weekend. It is that much fun!

Taking pages from various "lost world" stories, Keene rolls out his own take on the genre. With influences ranging from The Lost World by Arthur Conan Doyle, the Pellucidar series by Edgar Rice Burroughs, and up through the television series Land of the Lost and Lost, this story romps through dinosaurs, lizard men, killer robots, deadly vegetation and other dangers.

While the tropes are there (in a good way,) Keene also weaves in his own touches. There are some nice modern knuckle-down-and-do-it survivalist methodologies, which are often glossed over in such fiction. It adds veracity to the hero, Aaron Price. Keene's fiction is all connected and in this case, literally - there is a Labyrinth between worlds in time-space. Unfortunately, if travelers in the Labyrinth are not careful, they can wash up into the Lost Level - from which there is no return. Also making an appearance are the sinister Global Corporation, a shadowy conglomerate also present in some of Keene's other fiction.

The Lost Level is both homage and pastiche and makes no bones about it, wearing its influences proudly on its sleeve. It is pure Saturday matinee material in the best way. If you enjoy the lost world genre, you need this book!
Posted by Paul R. McNamee at 10:15 AM 4 comments: 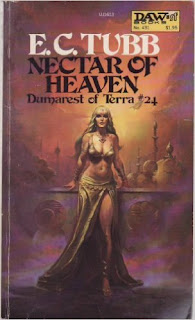 I felt like a quick read of adventure that wouldn't tax my mind too much. Nectar of Heaven delivered. The saga of Earl Dumarest continues. This time around, Dumarest falls in with a partner, Hart Vardoon, as they try to extricate a drug-gem mother lode and make their fortunes. (In Dumarest's case, the fortune will be used to continue his quest to find the mythical planet, Earth.)  On the planet Sacaweena, war has been replaced by vicious economic maneuvering. Soon after securing his fortune, Dumarest finds himself trapped between the political players of the planet, and a representative of the Cyclan - his ancient enemies.

There are some good action sequences though overall the story is uneven. There are lots of plot setups and it takes a while before everything collides. Still though, Nectar of Heaven delivered on what I wanted.
Posted by Paul R. McNamee at 9:24 AM 4 comments: 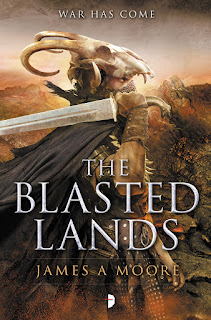 James A. Moore strikes again with The Blasted Lands. This sequel to The Seven Forges picks up directly where the previous novel left off.

The strength of this novel is its characters. They all feel real even though they populate a "grimdark" fantasy world. They exist in politics, in alliance forging, in war, in sorcery, in soul searching. We see all sides of the conflicts.

The plotting is no slouch, either. The players more through a swirl of intrigue and action. The tension ratchets up throughout the story right to the cliffhanger conclusion. The story is even larger and grander than its prequel.

I can't wait for City of Wonders!

(For an even more in-depth review that nails everything I like about this novel, I refer you to Keith West's review.)
Posted by Paul R. McNamee at 11:49 AM 3 comments:

I was flipping past the Glastonbury Music Festival 2015 on Palladia this weekend. I was captivated by a BBC off-stage performance by Songhoy Blues.

I don't understand the words, but I love the Afro-Blues-Rock groove of this song, "Soubour."

I started looking them up on YouTube for more songs. Boy, this one surprised me.

Music, beauty and absolute human atrocity. If you wonder why extremists of any stripe should make you nervous, look no further.
Posted by Paul R. McNamee at 3:53 PM 3 comments:

I had forgotten that Angry Robots were acquired by another publisher. While some series held on with Angry Robot (e.g.; James A. Moore's Seven Forges) other books went to other publishers (e.g.; Chuck Wendig's Miriam Black series.)

Another series that quietly floated off the iceberg was the excellent Egil & Nix sword-&-sorcery series by Paul S. Kemp. (disclaimer: I assume the second novel is excellent, it is still in my tbr pile.)

I was pleased to read this announcement this morning; 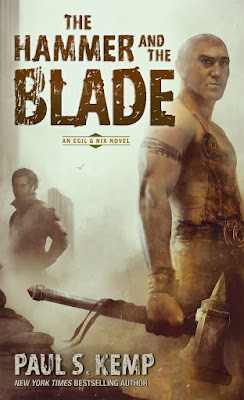 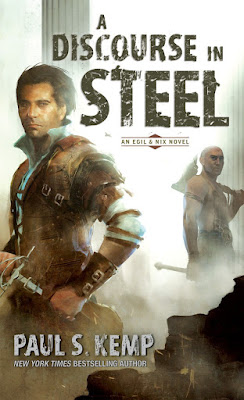 Also, if you dig into the table-of-contents, each book contains an excerpt (same one?) from A Conversation in Blood, the new, third entry in the series - due out next year.

Time to move A Discourse In Steel to the top of the tbr pile!
Posted by Paul R. McNamee at 2:52 PM 2 comments: