recent read; The Wolves of London 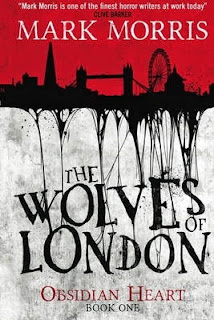 The Wolves of London by Mark Morris

With NECON fast approaching (and sold out,) I've started some reads for the occasion, works from both guests of honor and other attendees.

Mark Morris is one guest of honor, who will be coming all the way from the UK to attend. The Wolves of London popped up at HamiltonBook for a song, so I gave it a try.

Morris writes and edits horror, as I understand. This book is a bit more of a urban fantasy vein, I guess. It comes close to defying categorization - which is good.

This story starts off as a crime drama. A reformed convict, Alex Locke, finds himself drawn back into the criminal underworld - first to save his older daughter from hoodlums and then in a desperate race to find his kidnapped younger daughter. Coerced into stealing "the Obsidian heart," Alex soon encounters strange happenings that could be sorcery or science or supernatural. Things spiral further and further out of control and get stranger as the story unfolds. Is it all happenstance, or has Alex been getting setup by strange forces for a very long time?

This story had unpredictable twists, which I enjoyed. Once the plot enters the supernatural territory, Morris brings his horror chops to bear. If this is "urban fantasy" it is not of the "vampires, elves and werewolf races" sort. There are some real monsters here. Creepy and original.

In the old days, I'd just bop into a bookstore. I had no Internet pre-knowledge of upcoming releases or past releases I felt I needed to read. I'd buy what grabbed me from the shelf. I can safely say, The Wolves of London would have been such a book.

While I'm not rushing onto the next book (and the third in the trilogy is due out later this year,) I did find it interesting and enjoyable enough. I just have a really large list of things I want to read. I am curious about the third book which (minor spoiler) takes place in Word War I, thanks to time travel. I'll probably finish out the trilogy at some point in the future. 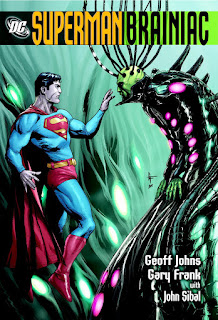 In this stand alone story, Superman finally goes up against his foe, Brainiac. He has dealt with various probes and forms of Brainiac in the past, but here Superman decides on a showdown with the real, original Brainiac. This features great art, has some wonderful moments with Kents and the story is a good examination of Brainiac and his motivations.

I love that the countenance of Superman in this comic is based on Christopher Reeve.

This book was adapted as a direct-to-disc animated movie, SUPERMAN UNBOUND. (Though, the animation didn't carryover the Reeve image.) 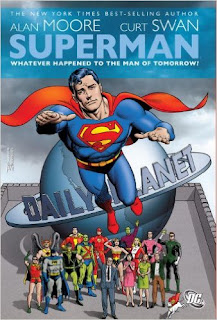 Superman: Whatever Happened To The Man of Tomorrow?

"Whatever Happened To The Man of Tomorrow?" was a swan song story written by Alan Moore. In 1985, the DC line was rebooting. This is their "last" story of Superman up to 1985.

After quiet years, Superman's remaining super-villains try one last all-out assault on the Man of Steel. After his identity is compromised, Superman flies his family and friends to the Fortress of Solitude where he makes his last stand.

This collection also includes a Superman & Swamp Thing story, which is surprisingly good.

The book is rounded out by "For The Man Who Has Everything," now considered a classic Superman tale that was adapted for both the animated JUSTICE LEAGUE television series, as well as recently being adapted for an episode of the new live action SUPERGIRL series. A parasitic alien plant gives Superman a comatose dream of life on Krypton. His friends struggle to free him from the parasite and save themselves from the alien warlord, Mongul. 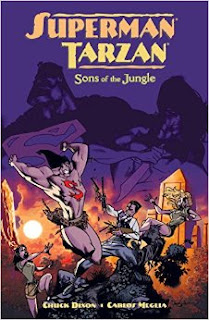 Superman / Tarzan: Sons of the Jungle

What if John Clayton had not been orphaned in the African jungle? What if Superman's rocketship had delivered the baby Kryptonian to the great apes, instead?

I must admit that I am only halfway through this one. I am enjoying this story. But the cartoony style illustration leaves me cold. I'd prefered a more direct approach to the art.
Posted by Paul R. McNamee at 4:30 PM 1 comment: