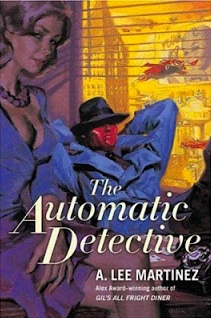 The Automatic Detective by A. Lee Martinez

From the blurb; Even in Empire City, a town where weird science is the hope for tomorrow, it’s hard for a robot to make his way. It’s even harder for a robot named Mack Megaton, a hulking machine designed to bring mankind to its knees. But Mack’s not interested in world domination. He’s just a bot trying to get by....and to earn his citizenship in the process....but some bots just can’t catch a break.


When Mack’s neighbors are kidnapped, Mack sets off on a journey through the dark alleys and gleaming skyscrapers of Empire City...What started out as one missing family becomes a battle for the future of Empire and every citizen that calls her home.

I have a friend whose lists this as one of his favorite novels.  I finally got around to reading it, and I'm glad I did.  This was a fun romp and a quirky story.

You might say it's Blade Runner meets The Iron Giant, or any other number of mash-up descriptions, but The Automatic Detective is very much its own style and story.

The blurb describes what you get.  Along the way Mack gains some humanity, makes friends, and earns the wrath of enemies.  Empire City is a quirky place of golden age scifi stories gone wrong, while its citizens try to do right (most of them, anyway.)  There is some light philosophizing on what makes a sentient machine a man, as it were.  Nothing heavy, it's just nicely sprinkled over a ripping yarn.

This one is worth the read, and I will be reading more of Martinez in the near future.
Posted by Paul R. McNamee at 8:42 PM 1 comment:

recent read; Robots Have No Tails 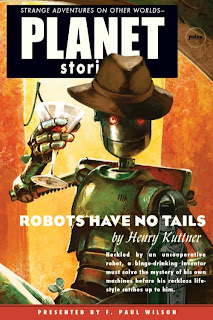 Robots Have No Tails by Henry Kuttner

These stories were fun.  A breezy blend of whimsy and The Twilight Zone.  (I have to believe Rod Serling read one or two of these.)  This book collects the five tales of Gallegher, the drunken inventor whose brilliant work is created when he is blotto.  The sober, hungover Gallegher is formulaically stuck with problems, a hangover, creditors and mysteries left by his alcoholic alter ego.

The book opens with a foreword from F. Paul Wilson reminding us to leave our political correctness at the door.  Not that there is anything racist or sexist, but the character of Gallegher is a drunk and his drinking problem is played for laughs. These stories were possibly influenced by the Nick & Nora Charles Thin Man movies, where the main characters - while not outright drunks - were hardly ever seen without a drink in hand.