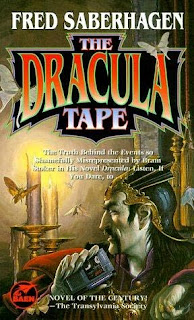 THE DRACULA TAPE by Fred Saberhagen

I am a traditionalist. I like my good guys good and my bad guys bad. But, in the hands of Fred Saberhagen, the flipping of traditional roles in THE DRACULA TAPE, I was still entertained. You see, Dracula isn't all bad. Yes, he's a vampire and he's no saint. But Bram Stoker's novel was a bit of a smear campaign built on misunderstanding. Van Helsing was a bumbling fool.

Saberhagen did a great job of following the original novel and inverting everything a reader thinks they know. Saberhagen drops wonderful bits of history along the way. Some of the deconstruction of the Dracula myth goes beyond mere misinterpretations. Crucifixes? Vlad fought the Muslim hordes! Why would the cross bother him?

I enjoyed the first half of this novel which is very clever indeed with turning all the elements of DRACULA 180 degrees. I did feel, though, that as the book progressed, and Saberhagen created scenes and conversations completely outside the realm of the original novel, the effort lost steam.

And his conceit on how Dracula survived his staking missed some salient points of Stoker's folklore, in my opinion.

Fun, worth a read. You do need to have read DRACULA to fully appreciate what Saberhagen was doing. Looking forward to more entries in Saberhagen's Dracula series now that the beginning has been established.

p.s. - I listened to the audiobook via Audible, and the narration by Robin Bloodworth is excellent.
Posted by Paul R. McNamee at 12:31 PM 2 comments: 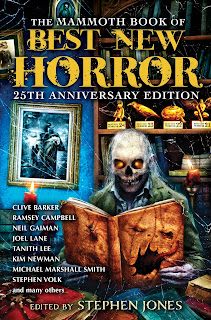 It's hard to go wrong with any of these The Mammoth Book of Best New Horror anthologies from Stephen Jones.

This volume came out in 2014, and contains stories from 2013. It also includes a dense "Introduction: Horror in 2013" which informs about all manner of publications in the horror field for 2013. The only drawback is that titles are embedded in the prose. You'll need to distill your own list, if you are interested in following up on any of the mentioned books.

The stories are all quality, I don't need to review each one. A few weren't to my taste, which is nearly always a given with any anthology. Some of my favorites were "Click-clack the Rattlebag" by Neil Gaiman, "The Middle Park" by Michael Chislett, "Into The Water" by Simon Kurt Unsworth (an Innsmouthian tale,) and "The Sixteenth Step" by Robert Shearman.

The volume also includes the entire novella, "Whitstable" by Stephen Volk, featuring a fictionalized account of Peter Cushing's off-screen life as he deals with a real life monster. Well done and worth the read.

The thick volume ends with "Necrology: 2013," which, sadly, is an "in memoriam" essay. Many people were lost to the horror field in 2013.

As I said at the top, you can't really go wrong with any of these. Worth having. Worth reading.

p.s.; Jones has been republishing earlier volumes through PS Publishing for e-book editions. New ones are e-book and hardcover. (Dropping the The Mammoth Book Of... moniker.) They have new EC Comic style covers, too. 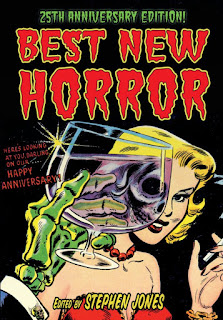 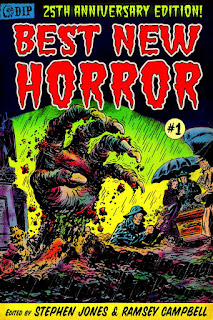 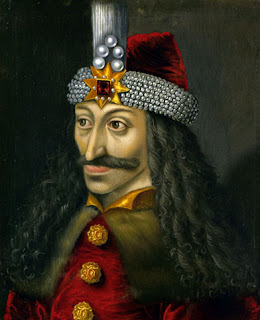 For this October, I am listening to Fred Saberhagen's THE DRACULA TAPE. It is a retelling of DRACULA from Vlad's point-of-view. Parts of the original novel are quoted/re-used. This morning I listened to Dracula's speech of his race. Re-reading the original speech (from DRACULA online at gutenberg.org) I find the speech would fit into a Robert E. Howard story.

“We Szekelys have a right to be proud, for in our veins flows the blood of many brave races who fought as the lion fights, for lordship. Here, in the whirlpool of European races, the Ugric tribe bore down from Iceland the fighting spirit which Thor and Wodin gave them, which their Berserkers displayed to such fell intent on the seaboards of Europe, ay, and of Asia and Africa too, till the peoples thought that the were-wolves themselves had come. Here, too, when they came, they found the Huns, whose warlike fury had swept the earth like a living flame, till the dying peoples held that in their veins ran the blood of those old witches, who, expelled from Scythia had mated with the devils in the desert. Fools, fools! What devil or what witch was ever so great as Attila, whose blood is in these veins?” He held up his arms. “Is it a wonder that we were a conquering race; that we were proud; that when the Magyar, the Lombard, the Avar, the Bulgar, or the Turk poured his thousands on our frontiers, we drove them back? Is it strange that when Arpad and his legions swept through the Hungarian fatherland he found us here when he reached the frontier; that the Honfoglalas was completed there? And when the Hungarian flood swept eastward, the Szekelys were claimed as kindred by the victorious Magyars, and to us for centuries was trusted the guarding of the frontier of Turkey-land; ay, and more than that, endless duty of the frontier guard, for, as the Turks say, ‘water sleeps, and enemy is sleepless.’ Who more gladly than we throughout the Four Nations received the ‘bloody sword,’ or at its warlike call flocked quicker to the standard of the King? When was redeemed that great shame of my nation, the shame of Cassova, when the flags of the Wallach and the Magyar went down beneath the Crescent? Who was it but one of my own race who as Voivode crossed the Danube and beat the Turk on his own ground? This was a Dracula indeed! Woe was it that his own unworthy brother, when he had fallen, sold his people to the Turk and brought the shame of slavery on them! Was it not this Dracula, indeed, who inspired that other of his race who in a later age again and again brought his forces over the great river into Turkey-land; who, when he was beaten back, came again, and again, and again, though he had to come alone from the bloody field where his troops were being slaughtered, since he knew that he alone could ultimately triumph! They said that he thought only of himself. Bah! what good are peasants without a leader? Where ends the war without a brain and heart to conduct it? Again, when, after the battle of Mohács, we threw off the Hungarian yoke, we of the Dracula blood were amongst their leaders, for our spirit would not brook that we were not free. Ah, young sir, the Szekelys—and the Dracula as their heart’s blood, their brains, and their swords—can boast a record that mushroom growths like the Hapsburgs and the Romanoffs can never reach. The warlike days are over. Blood is too precious a thing in these days of dishonourable peace; and the glories of the great races are as a tale that is told.”

I don't think this speech is too far afield from something Bran Mak Morn might say - lamenting his proud race (the Picts) and their achievements that have been eroded by history and the passing of time.

EDIT: Deuce Richardson tipped me off to this addendum to my observation, too; http://www.robert-e-howard.org/VGNNss03.html
Posted by Paul R. McNamee at 4:28 PM 5 comments: