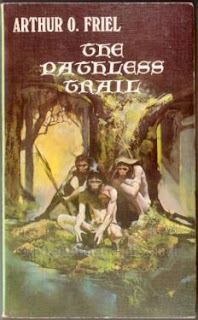 I stumbled on this by accident at a library book sale a few years ago. I recognized the Centaur imprint, as they had done some Solomon Kane collections under the same Time-Lost series.

I later replaced the paperback with a Kindle version to make some shelf space. I wasn't collecting the Time-Lost series, so no loss – except the Jeffery Jones cover art.

If you've followed the link above to Two-Gun Raconteur, you'll see this novel was read by Robert E. Howard, too. So, that was a bonus. Always interesting to dig to the roots of my own reading roots.

The plot entails three American adventurers in the jungles of South America, searching for a heir who has gone native with the man-eating "Red Bones" tribe – or so it appears. Along the way they must deal with treacherous Europeans, Brazilian and Peruvian rivalry on the river, and cannibal tribes that get more dangerous and combative the deeper the Americans travel into the hinterland.

After reading that Friel had once penned a tale with enough racist overtones that no one today will reprint it, I was prepared for the worst. You know, “superior white men” drivel and savages shaking spears. I was pleased that it is just the opposite. Friel had spent time on South American rivers and in the jungles. He paints a very vivid and veracious picture of jungle life. The white interlopers are fully aware that the natives are their key to survival. The natives are shown as clever and pragmatic, surviving in their harsh world. Before the end battle, the white men convince the cannibal tribe to fight their way – not out of superiority, but because the enemy tribe is led by a German, and the Americans know how he will fight.

It could have used more action, but there is a lot of well done tension building as the journey progresses. The final battle is suitably climatic and exciting.

Two things on the downside. First, there are a couple of racial epithets. Really, just turns of a phrase – nothing derogatory aimed at any given character. They could be changed easily enough, but it does give a window to racial attitudes of the 1920s and isn't exactly pleasant. Literally, though, there are only two such moments – it is not like the work is littered with them or anything.

Second, the secondary characters came across more interesting than the three main heroes. The pair of Brazilian bushmen, Lourenco and Pedro, already had starred in other adventures, so that is not surprising. I found the dialogue of two of the Americans stilted, and the third was rendered phonetically – and I have no idea what kind of a regional accent it was supposed to be – Southern, midWestern, New York City?

In short - it's a quick read, an interesting adventure and I enjoyed it more than I expected. That's always nice.
Posted by Paul R. McNamee at 1:01 PM 4 comments:

I was over at Adventures Fantastic via my iPhone the other day, and was surprised when the page popped up mobile ready - meaning, it displayed in a way that played 'nice' when viewing from the iPhone.

I found the Blogger setting. Under Settings->Email & Mobile, if you choose "Yes" on the Mobile Template, your blog will be much more easily read when viewed from a mobile phone. It does not affect viewing from the web browser on a computer.

I wonder which display it would use when viewed from an iPad?

Anyway - if you're on Blogger, you might want to change your setting to help out those accessing from mobile devices.

I've made the flip on mine - which you won't notice unless you're viewing from a mobile device, obviously.

First off, let me state that the title of this post is just for fun with the old pastiche titles. The movie was disappointing. Conan, as played by Jason Momoa, I really enjoyed.

Pretty much what I expected and how I expected to feel about it. I did really enjoy Jason Momoa as Conan - far more accurate than Schwarzenegger ever was.

The young Conan stuff was great. After that - not so much. Way too much riffing off other fantasy tropes. I don't mind pastiche, I can take pastiche if I can't get Robert E. Howard, but I need good pastiche that feels like Conan's world, not some other place. I want a story of Conan in Hyboria, not some run of the mill fantasy riff. The story was far too loose.

The opening narration was far too similar to Lord of the Rings. They damn near lost my attention right off the bat.

I could make a list, but let's just say one other thing that got to me - and I don't know if it's been riffed on much - was the sorcery. The Sand-Dead-Warriors whatever the heck they were. Hyborian sorcery should be treacherous, black candles, chambers in the bowels of the earth, flitting shadows. That 'spell' was pure The Mummy meets Jason and the Argonauts.

I would enjoy Momoa as Conan in a tighter, more faithful story.

Current box office numbers might mean that is a pipe dream.
Posted by Paul R. McNamee at 11:21 PM 4 comments: 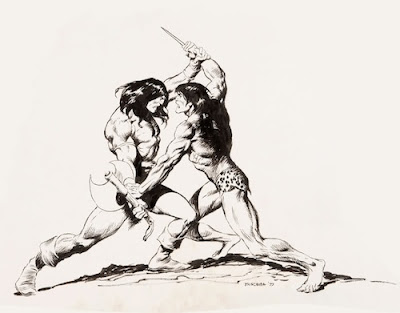 However, I stumbled on this essay this morning, and I think it is really well done. (missed it when originally posted)

Charles Saunders, in addition to Imaro and other "sword & soul" work, also enjoys writing about boxing, so this essay has a definite veracity to it - even though it is, in the end, fiction and therefore never truly decided.

I need to read some more Tarzan titles. I've only read the first novel.

I finally found a stride of more than one post per month, so I figure I should keep it going. 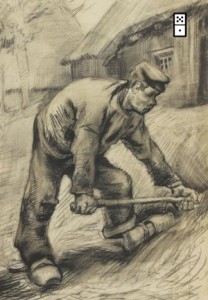 Do the Work by Steven Pressfield

This was a free pre-order on the Kindle. It's a short pep rally. It tangents off Pressfield's War of Art and deals with fighting--what he calls--Resistance. All that intangible fear, laziness, procrastination, etc, that keep you from doing what you need to as an 'artist' (writer, painter, entrepreneur, etc.)

I do like Pressfield's "foolscap" method - any story (or idea) should breakdown to a single sheet of yellow lined paper. For a tale that would be - sentence first act, sentence second act, sentence third act, theme written across the bottom. Take that skeleton and run. (also how this short book is presented, and it's a nice mirroring effect.)

Good pep for free, not sure I'd want to spend too much if you already have War of Art, though.

I mostly liked the revamped SciFi Channel Battlestar Galactica, but I'm still a child of the 70s, and camp or not, the original still appeals as well. This graphic novel popped up for $5 at the comic store, so I figured, "why not"?

The book opens with an especially enjoyable introduction, where Grillo-Marxuach describes pitching an unaired treatment to Glen Larson in 1979 - only that's not how it really happened because Grillo-Marxuach was only 9 yrs old and living in Puerto Rico at the time.

The story revolves around the Cylons experimenting with biological components and things go very wrong. It is a boon for the 'rag-tag fugitive fleet'. Or is it? Will they be as genocidal as the Cylons if they turn the biology experiment into a weapon?

It delivers on the nostalgia and it was fun to see a 'new' episode in the style and cast of the original series.

I don't know if I would have been fully satisfied had I paid full list price ($15) but for a bargain, it was just the dose of space opera remembrance I needed.

I think Charles is getting to me. :) Not only did I have a dream last night, but I remembered enough of it to post about it. And, it has some relevance to my usual subjects.

I dreamt that I was reunited with a schooldays friend. I was maudlin and noted that we couldn't be children again - though, we certainly could still have childish moments. There was a lot of reminiscing between us, but I was still depressed, and said, "We're just remembering what happened, I want to *feel* that way again."

A writer's lesson right there, I think. It's not enough to relate events in your story like a news reporter, or as some form of public remembrance - you've got to impart what it *feels* to be in your story, what the characters are feeling.

I know this is no secret writers revelation, really. We want to engage our readers. It can't just be neat ideas, plot points and execution, we need to invest in our characters as real, not chess pieces on the board of a plot.

Odd that this concept showed up in my dream. Maybe I need to look at my latest w.i.p. and ensure there is enough emotional pull on the reader. Maybe my subconscious is being my story editor, too!
Posted by Paul R. McNamee at 8:52 AM 3 comments:

Heroes of the Fallen 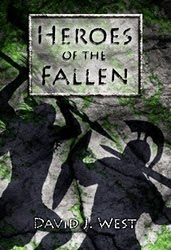 I finished reading David J. West's Heroes of the Fallen and I enjoyed it. I've heard of plenty of Biblical fiction, but personally I am not familiar with LDS circles, so I'm not sure how much fiction has been spun from the Book of Mormon - but I can probably safely say no one has sprung a pulp, sword-&-sorcery styling spin on things like David has. The originality of this work is refreshing.

I will admit the first half feels a little over burdened. There are many characters and a lot of literal wanderings. But, safe to say by the end I was interested in everyone, and invested in the growing action and tension. David not only gives us heroes and anti-heroes of reflection (Amaron, Aaron & Zelph) but we also get some well-drawn stoic strongmen in Samson & Mormon, either of who could hold their own in a tavern brawl with, well, let's just say ... a barbarian from the north. ;)

The main villain, Akish-Antum and his red-capped Gadiantons are drawn with enough pulp tone that I thought of Fu Manchu and insidious plots where his agents could be anywhere, and they are.

There are a lot of characters, as I said, but they all have some level of dimension. They have reasons and desires, and like any people, some make the right choices because of those needs and some choose the wrong path.

This novel, the first half of a much longer work, ends on a cliffhanger. That doesn't mean "this is the start of a series" cliffhanger. Oh no. This means "Sam alone, Frodo taken by the Enemy and things are getting bleak in 'The Two Towers'" cliffhanger.

The good thing is, the cliffhanger works. I want to know what happens. I want to witness some showdowns and battles.

(if you want more, then click on the book cover to head over to Amazon and get a copy for yourself)
Posted by Paul R. McNamee at 8:45 PM 3 comments: