The passing of a giant. RIP Derrick Ferguson 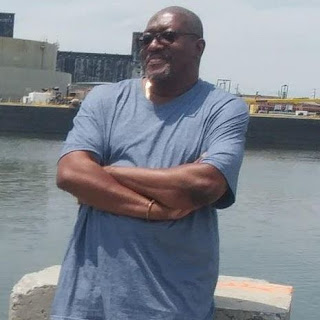 Derrick Ferguson passed away on April 4th 2021. I cannot claim to be anywhere near as close to him as his many friends and writing collaborators over the years but I felt like I should add to the tributes. And there are many. Just take a look at his Facebook page (unfortunately, many of them are set at 'friend' viewing only but there are still a lot of public posts and links to blog posts.)

I'd only gotten to know Derrick in the past few years. He was a huge mover, motivator, and founder of the New Pulp movement. I read a Dillon short story in BLACK PULP and then read THE VRIL AGENDA and friended him on Facebook. He wasn't just a giant of New Pulp, he was a gregarious giant of a man.

His 100 NEW PULP BOOKS TO GET YOU STARTED is an invaluable resource to help a newbie get their feet wet in the New Pulp movement. When I came in, the list was 50. Then in just the past few years, he bumped it from 50 to 75 to 100, often by going on recommendations from others, not just himself. I was honored he took my suggested additions on faith.

He read a short story of mine in STORYHACK #5 and lauded it. That meant a lot, as I was shifting into New Pulp writing, a new thing for me, having dabbled in some horror and weird up until then.

My favorite, and sadly only, collaboration story; Derrick put out a call for stories for DILLON: THE ODD JOBS 2. The concept being that Derrick would take contributions from other authors to write tales of Dillon or other Dillon-verse characters. I'd missed out on the first ODD JOBS. I wasn't going to let the opportunity pass.

I'd been trying to write a novella featuring my jungle hero, the Puma. I kept getting stuck on plotting. When the ODD JOBS 2 chance came, I asked Derrick if it would be all right if I tried a crossover, using Dillon. I wasn't sure two alpha males in the jungle pulp story would work but I wanted to try. Derrick gave me the go ahead.

I took a little longer than I wanted, but I sent him the novella in January. His first reply to me was that he had more to say, but upfront, he liked it and it reminded him of the Mike Henry Tarzan movies. I replied that was exactly what I'd been aiming for.

Imagine my surprise when next I heard about my story, Derrick was lauding it as a preview on his Facebook Dillon discussion group. Not only that, but he said,

I've just finished reading Paul McNamee's story for DILLON: THE ODD JOBS II and it was even more fun reading it the second time around as the first time I read it I had a feeling about what Paul was doing in this story and was delighted when he confirmed my hunch.
I'm not going to say much more about his story--which not only has the expected non-stop action a Dillon story is expected to have, but [also] some interesting observations about the deforestation of the Brazilian Amazon rain forest--except for this:
If you're as much of a fan of the Mike Henry Tarzan movies as I am (especially "Tarzan and The Valley of Gold") then you're going to totally love Paul's story because that's exactly what he's done: dropped Dillon right into the action-packed middle of a Mike Henry Tarzan movie

Later, I revealed to Derrick an Easter egg joke I'd really wanted to include in the story but never found the right spot. He replied, "LMAO! I would have fallen out of my chair if that had been in there!"

If there's one thing I take away from Derrick's writing presence it is that sense of absolute fun he was having. He reminded us all that you should have as much fun writing it as reading it--at least when it comes to pulp action adventure.

I wish I'd gotten to know him sooner and better. Life is too short. Time passes much too quickly these days.

Grab some of his books, read in his honor. I guarantee you will have fun and you won't be bored.

RIP, you giant of a wonderful human being. You are and will be sorely missed, Derrick Ferguson.