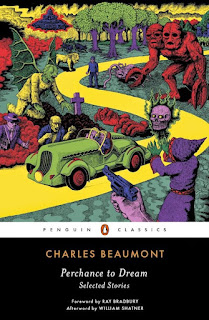 Beaumont wrote many episodes of The Twilight Zone, in some cases adapting his own earlier published short stories. Sadly, he died of a premature aging disease (Alzheimer's? - it's not really clear.) Like Bradbury - (who appears here via a recycled posthumous forward) - Beaumont was a machine who turned out story after story with original flare and sometimes wry twists.

His collections had gone out of print. Fortunately, in October, Penguin Classics released a new, solid collection of Beaumont's short stories. The book appears thin, yet it contains 23 stories. Beaumont was prolific. He knew how to strip and present a story at its bare essentials. Only a few of these stories are lengthy.

I won't analyze every story but they're all very enjoyable. Some of my favorites in this set were "Perchance To Dream," a tale of dreams within dreams that became a Twilight Zone episode, "You Can't Have Them All," a humorous story about a man determined to bed every woman who appeals to his personal taste in women, "The Howling Man," a story of the Devil (another tale later adapted to The Twilight Zone,) and "Place Of Meeting," which concerns certain survivors of nuclear war destruction.

Beaumont's talents outside of the weird and supernatural come through near the end of the collection with "A Death in The Country," about a desperate, washed-up race car driver and what he will do to stay in the game. And "The Music of the Yellow Brass" is a straight up story about a young, down-on-his-luck matador. It's a story that would seamlessly fit into Borderland Noir.

If you like the 1960s era golden age of genre-mixing-bending writers of weird like Bradbury, Matheson, et al, and you are not familiar with Beaumont, you definitely need to read this collection. I am very glad I did.
Posted by Paul R. McNamee at 10:47 AM