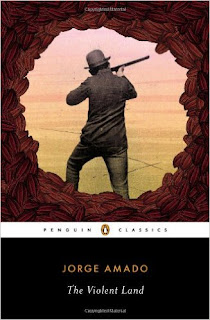 "From the great Brazilian author, an exotic tale of greed, madness, and a dispute between two powerful families over land on the cocoa-rich coast of Bahia

The siren song of the lush, cocoa-growing forests of Bahia lures them all—the adventurers, the assassins, the gamblers, the brave and beautiful women. It is not a gentle song, but a song of greed, madness, and blood. It is a song that promises riches untold, or death for the price of a swig of rum . . . a song most cannot resist—until it is too late..."

Not what I was expecting. I'm not saying it was bad, but I went in with different expectations. I thought I would get a rough & tumble Western set in Brazilian cocoa land.

Lots of players, movers. A lot of how the cocoa land corrupts the soul and the flesh.  Although the introduction hinted there might be cocoa/coco industry parallels, the cocoa production doesn't reach the US by the end of the novel.


It is more akin to stories about boom oil or gold rushes.

It's very nice writing, some good passages. Surprisingly open about sex and prostitutes. But written south-of-the-border, that's not too surprising. Though, if it reached the US when it was written (1947) I bet it would have been a firestorm.

The real bummer is how much of the gun fighting takes place off page. Far too much telling, not enough showing.

Anyway. Again - not bad - but not what I expected.

Your mileage may vary.
Posted by Paul R. McNamee at 9:30 AM