I'd never seen the movie, TRUE GRIT. Neither the first version with John Wayne (1969) nor the newer version from the Coen brothers (2010.)  And I had never read the novel.

During my vacation, I decided to consume and compare all three. I listened to the audiobook and then watched both films. 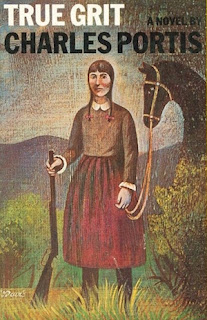 I loved the novel. Straightforward and harrowing at the same time. The audio narration by Donna Tartt is stellar. 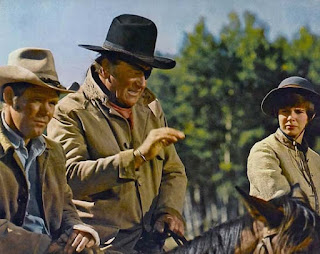 1969
First thing that hit me was the score. It is dated and unflattering. The sweeping strings just seem out-of-place in a post-spaghetti Western. On top of that, it starts with a theme song with embarrassingly bad lyrics.

Until the end, the movie followed the novel plot points almost exactly. The dialog was nearly exact from the novel, too. The denouement ending was invented around a point at the ending of the novel and was not in the novel.

It's still a grand, fun Western and a Wayne classic for a reason.

2010
The first thing that hit me was how much better the soundtrack was.

This version had a fair number of minor changes in the plot that kept me guessing. Ironically though, I think the tone and characters were closer to the novel. The ending adheres to the novel, too.

It was fun experiment. Fortunately, each movie and the novel all had more highlights than lowlights.