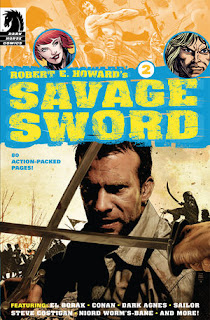 Good self-contained El Borak story.  At the very end, though, I did get a little confused as to which side was controlling the fort and who were the besieged and who were the attackers.
---

Back at the tavern, the swords come out.  Agnes draws some blood.  That's it - story over.
---

"A New Game for Costigan"
Written by Joe Casey

I enjoyed this one, though it is a humorous tale.  Costigan takes up fight reporting, and proceeds to offend both boxers in the upcoming big match.  Hijinks ensue.
---

Not a comic, but a printing of the horror tale with some b&w illustrations.  An old hag curses two vile sailors as they embark on another sea outing.  A young boy witnesses the Flying Dutchman bringing one of the men home.
---

"The Valley of the Worm"
Written by Robert E. Howard Adapted by Roy Thomas & Gerry Conway

A reprint from 1972, this is an excellent, chilling adaptation of the original Howard story.  Niord, an man of ancient times, kills a Cthuluian "worm", and creates the race memory of all the stories of a single man vs. dragon - St. George, Perseus, Beowulf, etc.
---

The story goes right off the rails in this part. Conan breaks into the Temple of the Elder Queen and sneaks past a roomful of guards. Then, he pauses, says, "No, you will know that Conan of Cimmeria was here!" He turns around, marches into the room and kills all the guards but one.

Let me repeat that.

Conan sneaks past the guards, and then in a fit of ego, he backtracks and kills them all save one with the sole intent of vaunting. Oh, there is a quick attempt at changing the reason for the slaughter into "the last surviving guard can lead Conan through the temple", but that really isn't setup as the reason. The setup reason is vaunting.  It's not like he goes searching for the treasure, cannot find it, and then comes back.  He immediately backtracks.

If this were King Conan, or pirate Conan, or battlefield Conan, I might accept his actions. But this is Conan the thief and the last thing he is going to do is to wittingly alarm the entire temple to his presence while he is trying to rob the place! He might become famous as a thief later, but he's not going to brag about it in the middle of the heist!

OK, the above was my initial reaction.  On rereading the tale for this review, I realize maybe I missed a few things - or, more likely in my defense, the elements could have been arranged a bit more logically.  Conan, in the middle of the slaughter, mentions he is no soft-bred city thief the guards are used to.  Maybe if the setup was telegraphed a bit more, I'd believe it.

For instance, 1.) Conan sneaks past the guards 2.) Conan pauses, and says, "They will get me to the treasure quicker" 3.) Conan attacks, during the fight, mentions the soft-bred city thieves and vaunts that they are fighting a Cimmerian (without saying his own name.)

The narrative also mentions that Conan is "reckless".  Yes.  But his recklessness doesn't belong in this setup.  He would attack the room if the guards spotted him - charging in recklessly at four-to-one odds where others would turn and flee.  Or, if there were no way past the room, or he was too impatient to find a route around the room, he would recklessly charge.

Even with such changes, I don't believe that after a successful stealth maneuver of getting past guard room, he would return and raise such a ruckus.  I don't think any thief would do that, Conan included.

I've said this a lot lately and I will say it again; I don't mind pastiche tales, but you need, at least, to try to understand the established characters and setting in which they live. Conan is not some fool waving a sword at anything that moves, the Hyborian Age is not a substitute for the Forgotten Realms. Do your homework!

So, that's it for issue #2.  Better cover this time.  One Howard story and one Howard adaptation reprint.  Interiors still fine.  Definitely worth it if you want to own the adaptation of "Valley of the Worm".
Posted by Paul R. McNamee at 10:15 AM