It's been nearly a year since my father passed away. Damn but time flies.

The anniversary of his death, too near my birthday at the end of November usually means miserable cold weather. The weather between Autumn and Winter. Wet, cold and lacking both the cheer of snow or the beauty of Fall colored trees.

Rather than wait, I paid respects yesterday. It was cloudy but unseasonably warm, the day was open. Coincidence it came on All Souls Day/Day of the Dead/Samhain.

Turns out the spot looks lovely in Autumn. Next year I need to get down a little earlier, perhaps. Some of the trees had already dropped all their leaves, but there was still enough nice color to go around.

Then I swung up to my great-grandfather's grave (same cemetery.) It is a shared plot with other past family members - great-grandmother, a grand uncle & a grand aunt. Unfortunately, their stone is a flat-in-the-ground style. Entropy had set in. Names were occluded by growth. (I need to come by more often. I probably will now that my father is buried there.)

Anyway - the humorous part comes here. I came unprepared for a grave cleaning. I had no gloves, and my pocket knife just wouldn't do the job. I could come back later, but I really wanted to do something then & there. I thought to myself, "Is there anything in the car I can use to take care of this now?"

Yeah. I keep an entrenching tool (collapsible spade) in the trunk for emergencies.

So, there I was, walking around the graves, with shovel in hand.

Glad no one called me out on it. Could have been awkward ;) 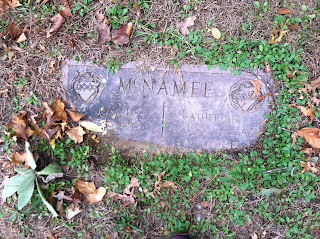 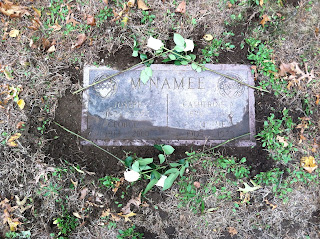 I think I can generate a few short stories out of the experience. :)