recent read; Tarzan and the Jewels of Opar 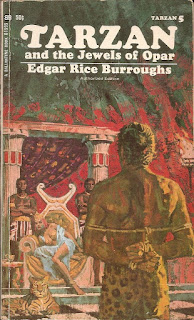 Over the past few years, I've been adding the original TARZAN novels by Edgar Rice Burroughs to my reading diet. TARZAN AND THE JEWELS OF OPAR was next on my list;

Albert Werper is a murderer and deserter of the Belgian army in the Congo. Fleeing into the jungle, he is captured by gang of slavers led by the Arab Achmet Zek. Werper convinces Zek of his fugitive status, and joins the troop of cutthroats. Tarzan has been running afoul of Zek, ruining his slave trade. Zek and Werper hatch a plan to kidnap Tarzan's wife, Jane (of course,) and hold her for ransom. Werper decides to pose as a lost French gentleman, separated from his safari, to gain access to the Greystoke compound and home.

Tarzan - John Clayton, Lord Greystoke - has a reversal of fortune before the kidnapper can strike. Suspected unscrupulous business dealings have wiped out Greystoke's capital back in England. But the loss doesn't cause Clayton too much concern. He will return to the lost city of Opar. (His first visit was during THE RETURN OF TARZAN.) He knows where the city's great treasure room is hidden. Even the degenerated descendants of Opar who still stalk the stone corridors don't know that. He assures Jane he will be safe and vows to return with gold.

Werper has eavesdropped on their conversation. Realizing there is no ransom to be had from a destitute man, Werper takes his leave and stalks Tarzan's safari through the jungle to trail him to the treasure and steal his own portion.

While both men are in Opar, an earthquake traps them. Clayton takes a hard blow on the head. He awakens an amnesiac. He can only remember his primitive existence as the ape-man. Eventually, he learns his name is Tarzan, but his more recent memories refuse to return. Manipulated by Werper, Tarzan helps him to escape from Opar, and Tarzan acquires a pouch of "pretty pebbles" from another treasure room - the Jewels of Opar.

The avaricious Werper has designs on the jewels, and Tarzan feels the pull of the jungle, unaware that Achmet Zek and his bloodthirsty horde are descending on the Greystoke bungalow...

Adventure and action follow in large doses. Combat, death, lions, apes, Queen La and her subhuman worshipers. Escapes and recaptures, reversals of fortune, double-crosses. The list goes on - in a good, adventurous way. 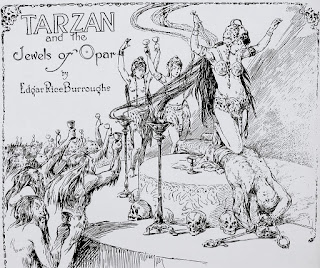 I enjoyed this story, a lot.

Right out of the gate, Burroughs drops a "civilization vs. barbarism" quote that surely must have caught the attention of Robert E. Howard.


To Tarzan of the Apes the expedition was in the nature of a holiday outing. His civilization was at best but an outward veneer which he gladly peeled off with his uncomfortable European clothes whenever any reasonable pretext presented itself. It was a woman's love which kept Tarzan even to the semblance of civilization—a condition for which familiarity had bred contempt. He hated the shams and the hypocrisies of it and with the clear vision of an unspoiled mind he had penetrated to the rotten core of the heart of the thing—the cowardly greed for peace and ease and the safe-guarding of property rights. That the fine things of life—art, music and literature—had thriven upon such enervating ideals he strenuously denied, insisting, rather, that they had endured in spite of civilization.

Forgetting his existence as John Clayton, Tarzan is feral, unpredictable, and dangerous. He is - perhaps - more of the barbaric savage than he has been since the first half of TARZAN OF THE APES.

The only plot points I had an issue with were the overuse of lion attacks. While it wouldn't have changed the story a whit, I think exchanging at least one of the attacks for a leopard attack would have been welcome change up.

Despite the plot cliche of "the hero has amnesia," I enjoyed TARZAN AND THE JEWELS OF OPAR. I think it is my favorite of the series so far. 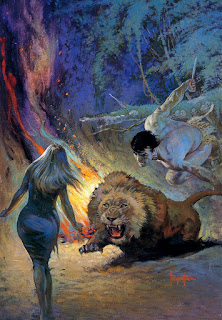