Well, not so much of a return as a drive-by.

When it comes to Lovecraft Country, there are different regions. The most famous, perhaps, is the northeast coast of Massachusetts, with its fictional Kingsport, Arkham and Innsmouth. Central-western Massachusetts is another area where at least two of his more famous tales were set - "The Colour Out Of Space" and "The Dunwich Horror."

Supposedly, the events of "The Colour Out Of Space" took place in an area that was destined to be forgotten under the waters of the new reservoir for Boston. Though he died before it was completed, Lovecraft cleverly worked the Quabbin Reservoir into "The Colour Out of Space";


Traces...will doubtless linger...even when half the hollows are flooded for the new reservoir. Then the dark woods will be cut down and the blasted heath will slumber...the secrets of the strange days will be one with the deep’s secrets; one with the hidden lore of old ocean, and all mystery of primal earth.

This weekend we attended a picnic in Amherst, MA. Our drive took us past one lookout area over a small portion of the reservoir along Route 202. We didn't have time to stop - the lookout was across the opposite lane anyway. And we took a different way out. So, I had to settle for a drive-by photo op. 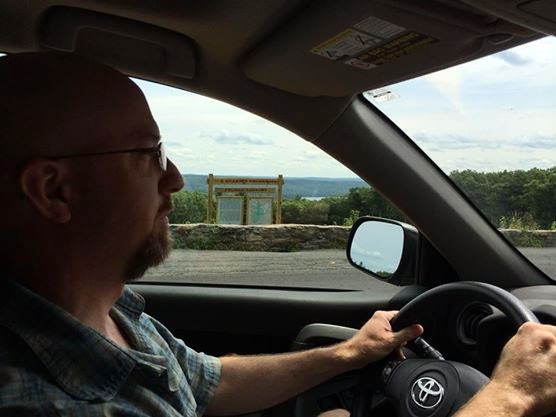 (If you zoom on the sign, you will see that it reads, "Quabbin Reservoir - Pelham Lookout." And you can see a bit of water in the far background.)

But, the way out was interesting, too. I forewent the GPS's suggested route on the way to the picnic - mostly for the Quabbin photo op. On the way back, the GPS took us through even deeper backroads, which are also Lovecraft related. I vaguely recognized some of the buildings and crossroads. I had explored around the area in my Lovecraft reading heyday. I had used "Lovecraft and the New England Megaliths" by Andrew E. Rothovius from The Dark Brotherhood and Other Pieces as my guide back then - referred to many USGS maps, too, before Google and Yahoo maps existed.

I sometimes forget how lucky I am to live in such a historical region - fictional history or otherwise. It was nice to drive through there with Lovecraftian fiction in mind, even if it was a brief passing by.

The nights here are already growing colder. It might be time to reread "The Colour Out of Space" and perhaps follow it up with a read of Michael Shea's The Color Out of Time, which is in my to-be-read queue.
Posted by Paul R. McNamee at 7:05 PM